TOUSLE-HAIRED laughmeister Milton Jones brings his unique brand of comic brilliance to Galway next week when he performs his new show, Milton Jones is Out There at the Town Hall Theatre.

Milton Jones is Out There is a manifesto of nonsense and the perfect antidote to the world’s troubles. If this master of the one-liner were running for prime minister, or even taoiseach, would the world be a worse place? The answer is a unanimous yes, but we will not let that put us off. The Surrey born comedian will be holding up the mirror of truth to society, and he can see right through it, which probably means it is just a window. He will also be putting his foot down and lifting the lid on the media’s pedal bin of lies. This is family-friendly, finely-crafted, comedy at its best from one of the legends of the UK comedy scene.

Ahead of his Galway visit, Milton took time to chat with me about the show and I began by asking what would his manifesto be if he were actually to be prime minister? “From observing politics at the moment on both sides of the Atlantic, the bar is quite low,” he notes wryly. “So my manifesto would include things like getting rid of obesity by making the doors of chip shops really narrow. I would give the French an ultimatum that if they don’t give Britain its own way in the EU negotiations we’ll call Greggs a patisserie. I say that I don’t want to make the Donald Trump mistake of reading that Mexicans make good fighters but it’s actually pronounced fajitas. There’s a speech in the show about what I intend and then realise it’s all nonsense; with me you always get a lot of daft stuff. I don’t think the show will change anyone’s political beliefs.”

Milton is one of the UK’s biggest-selling stand-ups, with his last two tours each seeing him perform to more than 100,000 people. He made his comedy debut in 1996, scooping the prestigious Perrier Best Newcomer Award, and he has since become a mainstay of the UK comedy scene. He is a regular face on TV shows such as Mock The Week, Live at the Apollo, Live at the Palladium, and Michael McIntyre’s Comedy Roadshow, as well as being about to record a 12th radio series for Radio 4.

He has been touring his current show for the past few months and it has been garnering rave reviews from critics and audiences alike. Does the show change much during its tour? “The skeleton stays the same but the show is slightly different every night, depending on who shouts out what, or I might throw in some new things,” Milton replies. “For Ireland I think I’ll have to add new things; I have a whole routine with national flags and bringing out the Union Jack in Ireland is going to be interesting. The first part of the show has me dressed up as Great Britain and I have Northern Ireland on a stick. Galway is my first date in Ireland as well. It will be interesting to see what happens. I have relatives in Ireland and my son’s girlfriend is from Cork so I will probably ask them a few questions beforehand.” 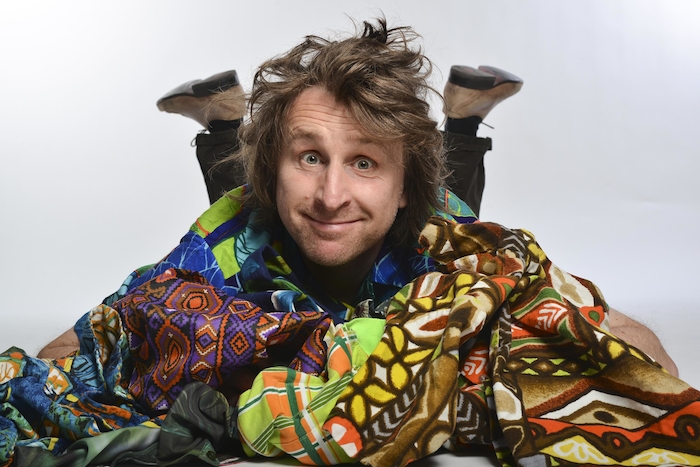 Best known for his inspired puns and one-liners, Out There sees Milton take on politics more than he usually does; “I do Mock the Week but you’re right,” he agrees. “Brexit was such a big thing in Britain it was impossible to ignore. What has been interesting has been going around, and when I take out the EU flag I sometimes get booing for 30 seconds and other times there is cheering.”

A few years ago Milton wrote a much-praised novel, Where Do Comedians Go When They Die? which hilariously described the many travails of a jobbing comic. Has he considered writing a second novel? “I have but it is an awful lot of work and I’ve been so busy since then that I haven’t had time to devote to writing,” he tells me. “Although you write as a stand-up; a novel is a whole different kettle of fish, and at the moment I have so much live work to do I haven’t had the time to write, but I’d like to do so in the future. In that book I was writing about what I know. I wanted to write from the other side, not the glamour and the glitz but the driving round for hours – we are more paid drivers than performers really.”

An avowed Christian, Jones has published two books of 10 Second Sermons which offer funny yet thought-provoking musings on faith (sample: 'Christianity is like a Cornish pastie. There's something in it, but sometimes it's difficult to find out what it is.' ). Could he have been a vicar in a parallel life I wonder? “Maybe preaching of some sort but I’m unemployable now in terms of anything else,” he chuckles. “If I ever do a church type environment gig I tend to try and stir it up and say something semi-controversial just because it would be too easy to go in and make in-jokes. Unless I see a light shining on the road to somewhere I am not going to be heading in that direction, I think I am probably more use where I am.”