AN EARLY highlight of the Town Hall Theatre’s spring programme gets under way this month with the return of Druid’s brilliant production of Samuel Beckett's Waiting For Godot. Directed by Garry Hynes, and first performed at the 2016 Galway International Arts Festival, the production has since toured Ireland and visited the US to huge acclaim.

At the centre of the play is the wonderful double act of Marty Rea as Estragon, lean as a pencil in his frayed pinstriped coat, and the shorter Aaron Monaghan as the perpetually perplexed Vladimir. Ahead of Godot’s return, Monaghan spoke with me about the play from New York where he and fellow Godot cast member Garret Lombard (Lucky ) are starring in Marie Jones’ Stones In His Pockets.

It has been 20 years since Monaghan made his stage debut and he is widely recognised as one of our foremost actors. His CV includes leading roles in prestige productions of Shakespeare, Synge, Sophocles, Murphy, and O’Casey, with many of those roles coming for Druid. Remarkably, Druid’s Waiting For Godot was his first time to do a play by Beckett.

“That’s right, though you could say that was deliberate,” he tells me. “People can get very obsessed about Beckett and it can be hard coming to his plays and having your own opinion on them when they have been so ‘academicised’ and discussed and revered. I decided early on I was going to take myself out of any conversations about Beckett and Godot.

"I felt I’d be doing it some day and I wanted my first interaction with the play to be seeing a brilliant production - which I never got to do funnily enough. My actual first introduction to it was reading it when I knew I’d be doing it with Druid. Of course it’s impossible to sustain an acting career and not know what happens in Godot, but for me it was useful coming to the play having never seen it or done any other Beckett beforehand.”

He reflects on doing the play with Druid: “When we first did Godot we all thought we were 30 years’ too young for the roles because the iconic Irish production that we grew up with was the one in the Gate with Barry McGovern and Alan Stanford and the late Johnny Murphy. We assumed our production would just have its two weeks in GIAF and it would be an interesting experiment for us as actors and Garry because she very much wanted to continue this work of the Druid ensemble, and Godot provided a new way of working with the group.

"The show didn’t end after those two weeks because it became bigger than the sum of its parts. We all loved doing it because something special happened between the four of us and the audiences responded to it as well. Barry McGovern came to see it and he was really happy. He said, ‘it belongs to a new generation now’ and it was like he was handing on the torch. 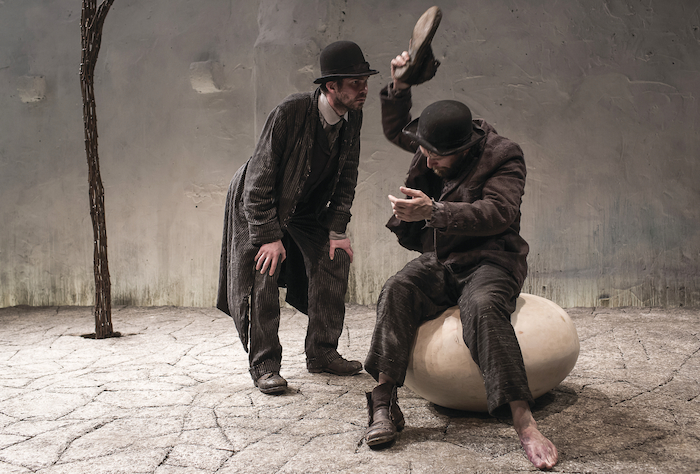 "There was a moment toward the end of the run where we were all very tired, because it is an exhausting show to do, but we were having a great time and we suddenly realised we could be doing this show for a long time. So it’s been great to come back with it now and remount it and talk about it and talk about its future. Every time we come back we want to do something slightly different with it or re-explore it. The play changes in every performance all the time.”

One of the memorable locations Druid’s Godot visited was Inis Meáin, where it played in an open air setting as stark as the one Beckett describes for the play. “That was extraordinary,” Monaghan declares. “We knew we were going to do it in a field that had a boreen going through it down toward the beach. The Druid crew brought us down and asked which way we wanted to face. There were a couple of houses in the distance and we immediately knew we wanted the audience to have their backs to the houses so that all they saw behind us was the skyline and the sea. There were no animals and just a couple of stone walls, it was an amazing landscape and the memory of performing there is very special in all of our hearts because we had magic moments there.

"It was an extraordinary experience; when you are looking up at the sky which the characters do so often and you’re looking around to see if anyone is coming down the road and there is nobody around so it was a very profound sense of the play. There was another element to it as well; I think the play can absolutely be done outdoors and it was a brilliant experience doing it, but I would also say that as much as you gain from that you do lose something of its theatricality. 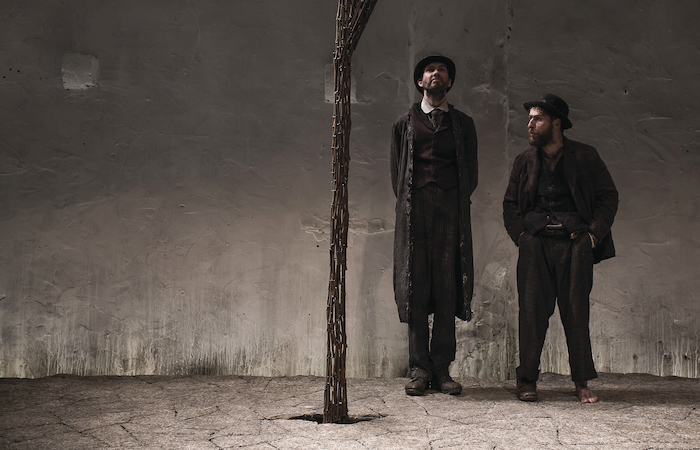 "It’s a very strange play; it refers to the fact that these two men, Vladimir and Estragon, are being watched by an audience. It refers to being in a theatre which you can’t really get when you are doing it in an open air setting. We learned a lot by doing it outside; it expanded the play for us. So when we went back to do it in the theatre we very much embraced that it is set in a theatre and it became an even more profound experience, it was joyous really.”

Having finally broken his Beckett ‘duck’, Monaghan looks forward to acting in more of his plays; “Absolutely!” he enthuses. “I’ve read some of the others, like Krapp’s Last Tape and Endgame, and I think they’re waiting for me at some point. What’s great about this is we are four comparatively young guys doing a play which has belonged to the veterans of Irish theatre. So I suppose we have to carry the mantle now and feel responsible for it. After doing Godot I’d feel confident about doing Beckett in the future. It was so much fun; it’s one of the funniest plays I’ve ever read in my life. 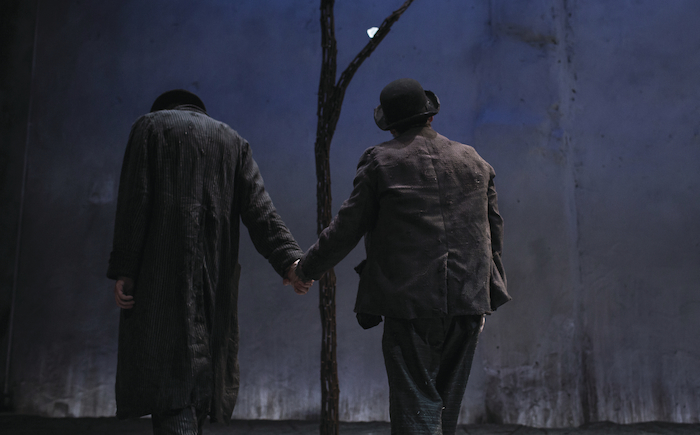 "Every night you hear a line anew and it can be a simple line but you hear it in a completely different way. I can’t wait to do it again, particularly with these guys. When we took it to Charleston, South Carolina, we had a very different audience, if they didn’t get the humour in the first few minutes they’d give up on it so we had to change our style a bit and pick up the pace and make it lighter.

"We realise that there is a whole different direction to the show that we could do as well. Marty and myself ask a lot of different questions of each other onstage every night and we talk about the show a lot, and how we might have done it from one performance to the next. That makes the play very alive and new and fresh and a brilliant experience because you heard it in a different way every night. I think we’ll be doing the play for a long time and having as much fun with it.”

Waiting for Godot runs at the Town Hall from Thursday February 22 to Sunday March 3. Tickets are available via 091 - 569777 or www.tht.ie