MARCH WAS originally the first month of the year in the Roman calendar, and for Galway Street Club, March has long been a month signifying new beginnings, providing exciting starting points, and, especially this year, marking significant milestones.

Galway Street Club was formed in March 2016, when a group of buskers got together for a jam session and found their collective interaction produced something special. March 2017 saw the group mark their first birthday by playing two gigs at the Róisín Dubh for St Patrick’s Day. This March, the Club returns to the Dominick Street venue to again play two St Patrick’s Day shows, and launch their debut album - the magnificently entitled Sovereign State Of Madness.

“We do seem to use March as our springboard for the year,” muses band guitarist Paul ‘Butch McDangerous’ McDonagh as I meet him, and fellow Street Clubber Spud Kennedy, also a guitarist, for this interview. “We’re all buskers, so we take the winter off. March is a time when the weather is getting better, and we can start busking more.”

While busking remains at the core of what the band members identity as musicians, Galway Street Club are aware that this is a time of transition. The new album symbolises their determination to expand the audiences that have been enthusiastically flocking to their shows, and to be seen, not solely as a collective of buskers, but also as a serious band. So are the days of regaling audiences on Shop Street over? Not quite. 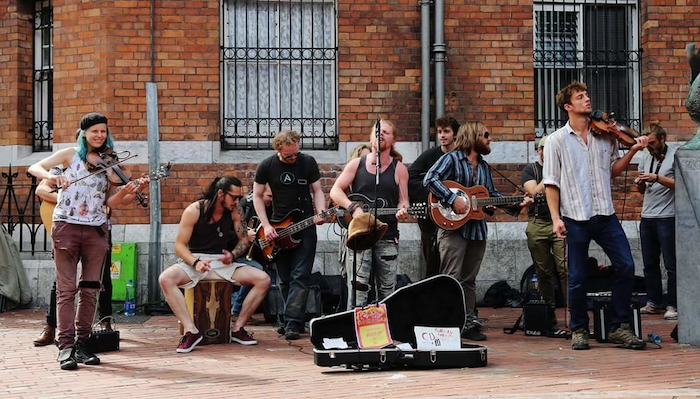 “That’s not something the band has decided on yet, as we’re still riding the wave,” says Spud. “We haven’t decided on a specific direction. For my part, I will always be a busker. I love that process of developing new songs and ideas on the street, connecting with people, and getting in touch with the local area.”

Paul says busking is a practical necessity as well as an enjoyment. “It’s nice to arrive in a new place and get so much love. We’re going to Germany in April and May. We’ll be playing gigs in venues, but also be busking. Busking is important as the money we make from it allows us to pay for travel, accommodation, and food!”

“It is important,” agrees Spud. “We’re doing everything independently. Everything we do we pay for ourselves - the hostels, the recording, the transport - the kind of thing a record label would pay for. We’re doing it without that backing, but people are really good to us. We’ll put up on our Facebook page that we’re coming and is there any place to stay, and people come out of the woodwork, offering us a room or a couch. We wouldn’t be able to do what we do if it wasn’t for them.”

“Also our manager Dominic,” says Paul. “He’s the glue that holds the whole ship together.” Adds Spud: “We get a lot of support through social media and Dominic is a social media wizard.”

With Sovereign State of Madness about to be released, how do the band feel about having a debut album to their name? Spud sinks into the chair, and issues a great sigh of “Aaaahhh!”. It’s a relief to have it done, and the band are immensely proud of it. “It’s exciting,” declares Spud. “After two years of work, every day being together, playing across Ireland and all over mainland Europe, we have made a solid, original, album. It’s ours. These are our own creations. We put all our love into it. We’re a band for real now.”

Sovereign State Of Madness is entirely self-written, and is a rousing, high energy, full blooded collection of rambunctious folk-rock, gypsy jazz, blues, roots, Irish trad, Eastern European folk, and a meeting space between all these disparate genres. The diversity speaks of the diversity of talent, nationalities, experiences, and interests each member brings, but also of the unity these musicians achieve, with all the styles blending seamlessly into a coherent whole.

“Diversity is our signature sound,” says Spud. “That’s the key to Galway Street Club. We go from blues to trad to ska and everywhere in-between, but whatever we play, it always sounds like us.” Says Paul: "We went to Portlaoise to record the album. Whoever brought a song forward spearheaded it. We had some finished songs and we added to them. Others were maybe just a few chords, or a line, and really needed development, and on those there was more input. In all cases though we ‘Street Clubified’ them.”

Among the highlights are ‘Fun Lovin’ Time’ (“If one song sums up Galway Street Club it’s this one,” declares Spud. “Energy is the key to what we do and to what we bring to the stage, it’s what we are about ); two splendid instrumentals showcasing the band’s sense of feel, dynamics, and grasp of traditional forms; the startling, unexpected heavy blues-rock of ‘Open Your Mind’ (“It’s a totally different direction from the other songs,” says Paul. “That’s Laura’s tune. We just honed the riff” ) and Spud’s own composition ‘Have You Ever Been’.

“It’s an analogy of what it was like living in Texas and New Mexico and not caring where you are from, but still being stuck there,” he says. “I went back two years ago and ended up having emigration issues, and got stuck in New Mexico! It deals with things I had run away from.”

And how did he come to Galway? “I met a girl,” he says. “She wanted to go travelling and I said I’d never been to Ireland. We sold everything we could and were in Ireland five months later. I busked a little bit, lived-in Kinvara for eight months, and realised I didn’t want to leave Galway.” 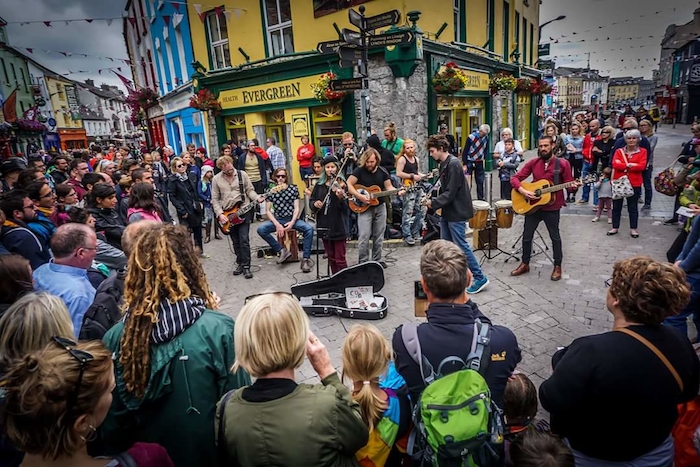 “The Róísín Dubh show is the start of the Irish tour,” says Spud. “It’s exciting to see people, the energy is high. It’s unreal. We have a massive fan base on social media, and from our tours, but Galway is where it is most concentrated and in the crowd at the gigs we see faces we know. There is this group of Italians who, every time we play, go to one person’s house, gather together and have a meal and then come out to see it. They make a night of it, and it’s great to think we are part of something like that in people’s lives.”

Galway Street Club play the Róisín Dubh on Saturday March 17 at 5pm and 9pm. Admission is €5. Sovereign State Of Madness will be available to purchase at the shows.