Always Ascending will be released on Friday February 9. The following day, Saturday 10, they kick off their European tour with a 'Róisín Dubh presents...' concert in Leisureland, Salthill. “We’re very positive about the album and playing it live,” Bob tells me, during our Tuesday afternoon interview. “We’re enjoying ourselves at the moment. The new line-up makes it feel like a new band. It feels like a new beginning. It feels like a fertile period.”

While it will be next week before we can hear the full album, the title track, ‘Feel The Love Go’, and ‘Lazy Boy’, available to hear on YouTube and various streaming services, justify Bob's confident assertions. The band do indeed sound revitalised. They also manage to sound both familiar and different, presenting songs that are recognisably them, yet conversely also subvert their signature sound.

Tight, metronomic dance grooves remain to the fore, but synthesisers swamp and dominate the guitars, creating a kind of fusion between FF's modern post-punk and full blooded techno workouts. So what motivated this? Bob explains how departures and arrivals within the band’s line-up; working with a new producer; their collaboration with the eccentric American duo Sparks; and a desire to just do something different combined to give Franz Ferdinand a real shot in the arm.

“You want to keep it interesting for yourself,” he says. “When Nick McCarthy, our original guitarist, left, that presented an opportunity to do something new, and we embraced it. It was an opportunity to push other parts of the band further. Every album has had electronica on it, but this time we’ve really brought it to the fore.”

Always Ascending is the follow-up to 2013’s Right Thoughts, Right Words, Right Action, but inbetween Franz Ferdinand joined forces with American left-field pop duo Sparks, releasing the FFS album in 2015. What kind of impact did working with brothers Ron and Russell Mael have on FF?

“I’m not sure if musically it had an influence, but certainly the process has been influenced by our collaboration with Sparks, the way we write, the way we made the album,” says Bob. “Because we were in Glasgow and they were in LA, we’d be emailing each other back and forth; then there was an intense period of rehearsals, and we recorded the album in two-and a half, three, weeks. That was due to time constraints and geography, but as a result that gave an energy to the sound, and also a focus.

“We wanted to replicate that for this record, so we put a lot of hours into arranging and working out the songs, and tweaking them. At rehearsals we played them over and over again so we became so familiar with the material it created a confidence and an energy that was important, and we wanted to capture that. We were able to record the album in about six days, but the whole process started a long time before that. That was something we learned from FFS.

How true is the story that the Sparks collaboration was the result of FF lead singer Alex Kapranos being unable to find a dentist in San Fransisco? “Yeah, it’s kinda true,” says Bob. “We met Sparks in 2004 and got on well with them. We met a couple of times around that period and always said we should work together at some point. We have a lot of shared tastes and approach to music, but we were busy, they were busy, and we never came together. Then, in 2013 in San Fransisco, Alex was walking around the street. He couldn’t find the address of the dentist he had an appointment with, when he bumped into Sparks. We ended up going to their gig, got chatting, and we had another look at that idea of working together and decided to make it happen, and that’s when we began emailing back and forth.”

Bob asserts that Franz Ferdinand’s new members, Dino Bardot and Julian Corrie, have played important roles in the band's revitalisation. “Julian joined two-thirds of the way through the writing process and was a big part of the arranging, producing, and performing,” says Bob. “He has a background in electronica as he performs solo under the name Miaoux Miaoux. We had been writing more with synthesisers and exploring different sounds and that’s something he was straight on to. That’s his world.

“Dino joined after the album was made. He’s an incredible guitar player. That increases the scope of what we can do live, and brings new elements to the back catalogue. It’s given some of the older songs a new lease of life.”

Also vital to Always Ascending was producer Philippe Zdar, who recorded the album in at RAK Studios, London, and Motorbass in Paris. “Philippe is an amazing character, a huge force of nature,” declares Bob. “He brought huge energy to the process. He’ also a DJ and has worked with Phoenix and The Beastie Boys. We’ve always wanted to make dance records played by live human beings. He was really into that, and what you hear on the record is us playing live in the studio. There were no click tracks, there are no edits, no pro-tools.” 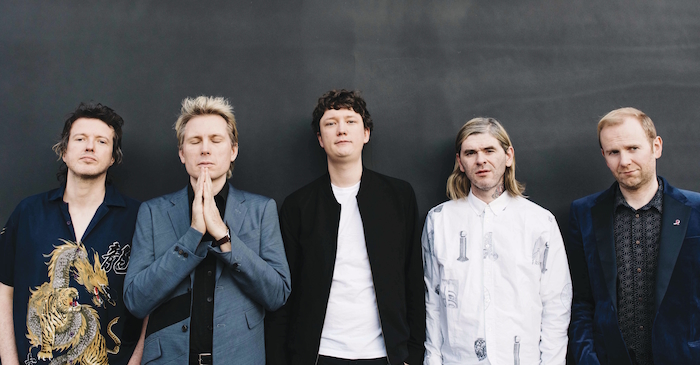 As a bass player, the move towards a more electronic/dance sound was something Bob must have relished, given the importance of bass within that genre? “I’d be lying if I said no,” he admits. “The rhythm section has always been a strong part of Franz Ferdinand since the beginning, and drum and bass are key to approaching that dance sound. I’m especially enjoying playing it live as you’re responsible for the rhythm and keeping the groove.”

Always Ascending is being released digitally, on CD, vinyl, and also cassette. What is Bob’s view on the revival of the cassette format? “I spent my whole teenage years, and into my twenties, listening to cassettes,” he says, “but I was quite glad when they went away. I don’t miss having to spool a tape back together when the tape player chewed them up! I’m not going to be using the cassette format now, but it does seem to be popular with young people. Good luck to them.”

Bob recalls that Michael Jackson’s Bad was the first cassette he ever bought. Jackson’s 1987 album makes a lot of sense given its strong focus on tight, danceable, rhythms - something that, as Bob pointed out earlier, drives Franz Ferdinand’s music as well. Is it still an album he enjoys hearing? “Yes, totally,” he says. “When you were a kid, tapes were expensive, so you only had a few to listen to, and because of that you listened to them to death. I must have listened to it thousands of times, I know every lyric, every note. It’s part of my soul.

After the Galway and Dublin shows, Franz Ferdinand tour Britain, Germany, and France, with stop offs in The Netherlands, Spain, Italy, and Eastern Europe, before a run of dates in the USA in April and May. Bob is a vegan, so what are the challenges of the vegan diet and lifestyle for a touring musician?

“I’ve a great app called Happy Cow, which lists vegan restaurants in any city you’re in,” he says. “In some countries it’s harder than others, but in general, as the years have gone by, it’s gotten easier, and looking for vegan restaurants, you go to areas of cities you wouldn’t normally - they tend to be located outside the city centre, on the outskirts - so it makes you walk around the town and see another side of a city, not just the tourist side.”

Doors for the concert are at 7.30pm. Tickets are available at www.roisindubh.net, the Ticket Desk at OMG Zhivago, Shop Street, and The Róisín Dubh.