NEVER MIND your Easter Eggs on Sunday morning; the real treat this weekend is the launch party for My Fellow Sponges’ eponymous new album at the Róisín Dubh.

My Fellow Sponges is the Galway quartet's second album, following their 2013 debut Bonne Nuit, and it reveals a more fully-developed sound that captures the energy and magic of their bewitching live shows. Through 12 tracks, the Sponges take listeners through a forest of musical genres and human experiences, from the fizzy, mock-pop, ditty 'Ear Piercing', to the heart-pounding-synths of 'Without You'. This is a band bursting at the seams with creativity and here is the most fully-realised representation of their work to date.

My Fellow Sponges also features fan favourites like the title track and 'The Cold Hand', which bring original perspectives to the experience of love and romance. On 'The Cold Hand', Anna Mullarkey sings impishly: "I’ve been told not to touch that man/I feel bold, gonna do it, 'cos I can," while Donal McConnon’s seductive love song ("Is this an ending or are we about to begin...loving is grand even built on the sand" ) perversely takes its title from a major WW1 German military offensive.

McConnon and Mullarkey are the founders and main creative forces in the band, whose line up is completed by David Shaughnessy (drums ) and Sam Wright (bass ) and, ahead of the new album’s release, McConnon chatted with me about the group’s distinctive musical dynamic.

“We had a batch of songs we’d built up over the last few years and we wanted to get them down and also to explore the recording process as a band,” he says. “I think it is a craft that is worth honing. We’re a lot more used to playing live and are more comfortable in that realm but over the last few years we’ve built up skills in capturing performances and developing technical skills around recording and editing. Also in that space of time, Anna’s recorded herself and produced some of her own music, and I’ve done the same with The Curly Organ so it’s been a bit of a journey for all of us.”

My Fellow Sponges is an apt name for both group and album given the way in which they successfully absorb a wide range of different sounds and influences. The disparate instruments and musical styles all fuse and are refashioned into a coherent, and wonderfully Spongified, whole. 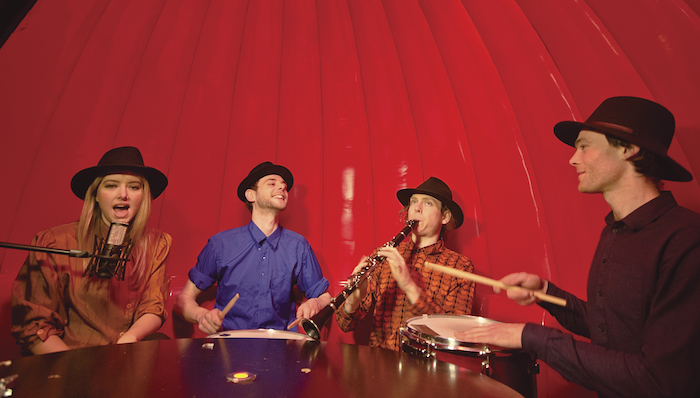 “I hope so,” Donal says, disarmingly. “I’d love to hear what people have to say about that because it’s important to make sure that it does. I don’t mind it not being cohesive as long as it’s not jarring. One thing that has defined us from the very beginning is that Anna tends to think more in terms of arrangements; it’s very cinematic the way she composes whereas I’d be more rough around the edges – deliberately so - and more interested in maybe shaking people up a bit with the music. Anna is more dreamy and is more about creating an atmosphere. I hope it’s complementary in some way or makes sense but I can only know that by hearing people’s opinions back because when you’re in it you can’t really tell!”

I ask Donal how 'The Schlieffen Plan' ended up with its title. “It was kind of a joke really,” he confesses. “I didn’t decide to call it that, Sam, our bassist, did. We were filling out an IMRO form one day for Sunflowerfest in Lisburn and we had the song but no title for it. I’d been talking about the Schlieffen Plan and Sam just jotted it down as the name of the song on the form so then we were legally bound to stick with that title!”

Mullarkey and McConnon each write about half the songs on the album, with Mullarkey’s numbers including winning tracks like the liquefyingly lovely ‘The Calling’ and ‘Air’ which sounds like a hit soundtrack that just needs a movie attached, while McConnon keeps his end up with offerings like 'Camino' and 'Family Circus'. “Camino is from a few years back, I wrote it when I was travelling around Spain,” he reveals. “I guess it’s about setting out into the world and it being scary and exciting at the same time. We put it together in the studio and built it up, you can hear extra percussion and you might hear extra noises that are not necessarily musical but we put them there anyhow. We went to the Macnas workshop where they make their giant puppets which is this big echoey garage and we made lots of noise with whatever was lying around and I recorded it all and edited it down.”

As well as the new album My Fellow Sponges will also be staging a new show, Fuzzy Air, in the Galway Theatre Festival in May. “We’re putting the show together with other performance artists – circus performers and musicians - we really like,” Donal tells me. “So we are exploring how we can complement each other’s performances. It’s a nice little project, and it’s interesting to see how certain performance artists can fit in with our music, yet it is symbiotic and gives us a chance to explore new things as well. I wanted to do more physical stuff , like dance or movement because I don’t do it enough. We’re putting our needs and resources on the table and something like a narrative is emerging which is sustained and enhanced by the music.”