THE YEAR is only just beginning to hit its stride, and already it is one to remember for “Dublin folk miscreants” Lankum. January saw them play Shane McGowan’s 60th birthday concert; while March sees the band up for the RTÉ Choice Music Prize, and begin a much anticipated Irish and British tour.

All this, coming off the back of an extraordinary 2017 which saw the quartet - brothers Ian and Daragh Lynch, Cormac MacDiarmada, and Radie Peat - release their second album, Beneath The Earth And The Sky - via iconic British independent label Rough Trade. The album went on to enjoy enormous critical acclaim, a No 1 spot on the iTunes singer-songwriter charts, and a place in most print and online ’Best Album Of the Year’ lists. “2017 was amazing,” agrees Ian Lynch. “So the plan is to keep it up and keep doing what we’re doing.”

Starting as you mean to go on is clearly Lankum’s modus operandi, with the band already developing ideas for a new album. “I get up at six in the morning to write new songs, so we’re getting the heads down," says Ian. "We’re very busy. There is a bit of a theme going through it already, but it’s too early to comment on that. There’s lot of ideas, but what will make it on to the final album is hard to say at this stage. What we’re doing now could be very different to the end result.”

Ian also admits being still on “a bit of a high” from the Shane McGowan gig. “It was one of the most amazing things we’ve ever experienced as a band,” he says. “We couldn’t believe we were there. It was a really big honour. I know people can be cynical about these concerts, people making speeches, and it all becomes about themselves, but the night was all about Shane. It was really emotional. I’m still trying to process it.”

The emotion is all the more understandable when Ian tells me: “The fact is, if it wasn’t for The Pogues, there wouldn’t be Lankum.” Ian and Darah began their musical life in anarchist punk bands, but when a friend gave Ian a copy of the Best Of The Pogues, “it was a game changer”.

“I remember ‘Rainy Night In Soho’ was the first thing I learned to play on tin whistle,” says Ian. “From them, I moved to Christy Moore, Sweeney’s Men, The Bothy Band and Planxty, Willy Clancy, Seamus Ennis, John Reilly. It was important to have that gateway band. There is a need for bands like that to exist. The Pogues were seen as embarrassing to a certain class of Irish people who were newly respectable, and saw these second-generation London-Irish living up to the stereotype. Noel Hill called them an ‘abortion of Irish music’, but the power of Shane McGowan’s writing outlived that.”

McGowan, of course, was as influenced by punk as he was by Irish trad, and Lankum’s music also retains a sense of punk anger, energy, and spirit. “Even with Lynched [the band’s original name] as far back as 2003, there would have been raucous and protest songs,” Ian notes. “For me, it was finding those same raucous impulses in Irish trad I had already found in punk, but articulated better, so, rather than screaming in front of 20 people in a squat - which was great fun and I did that for many years - now we play to 200 people from all walks of life and ages groups. It’s still coming from the same viewpoint, but it’s a different way of bringing the message."

The rebel spirit animates Beneath The Earth And The Sky’s key track, the epic, politically-engaged, ‘Deanta in Éireann' - sung by Ian, accompanying himself on uilleann pipes - where the forms of the 'come-all-ye' folk songs, and the language of sentimental romantic nationalism, are subverted into a powerful critique of Irish attitudes, apathy, and political conservatism.

“It was written coming up to the commemorations for 1916, and reflecting on what it means, and what’s happened in the intervening 100 years and what we have learned from it,” says Ian. “I started with the intent of writing a modern day emigrant song, but it took on a life of its own, and ended up addressing other aspects and became concerned with how Irish people view themselves, how others view us, and how the Irish think others view them. Many view us as fighters and having a rebel spirit - I wish we were, but we’re not great people for standing up for ourselves.”

The song reflects not only’s Ian politics, but also his knowledge of Irish folk music traditions (he is a professional folklorist and lectures at universities ): “The inspiration goes back to the form of the Anglo-Irish ballad which came in in the late 18th/early 19th century, when people were learning to write in English, but using the forms and style of Gaelic poetry. In the 19th century a lot of them would have been very political and very satirical, and I was very conscious of writing it in that style.”

I’m far from alone in believing Lankum to be arguably the freshest, most exciting, voice in Irish folk and trad for many years. Finally, there is a trad band who display a sense of daring, inventiveness, and vigour, not seen since Planxty, Sweeney's Men, or The Bothy Band in the 1960s and 1970s, but speak it in a language that resonates with my and (more importantly ) younger generations.

“I would be reluctant to put my own band in the same bracket as them,” says Ian. “They are very big influences. They were important in introducing other elements into the tradition, making connections with Eastern European music, while at the same time being very respectful of the traditions of Irish music. In those terms I see us as doing something similar.”

That balance between doing something new with a traditional form, and respecting the heritage, is extremely difficult, but Ian has a stark reminder to trad purists of the origins of Irish music. “As a folklorist, what I see is that traditions never really die,” he says. “Certain aspects die, but overall they transform and change. They can disappear or go underground, but pop up again, in a different guise, maybe 50 years later. The evolution of human culture is not something we can control. It has a mind of its own. We make music. We are a folk and trad band, but I have to be truthful to my own musical reality, which is attuned to all different kinds of music. 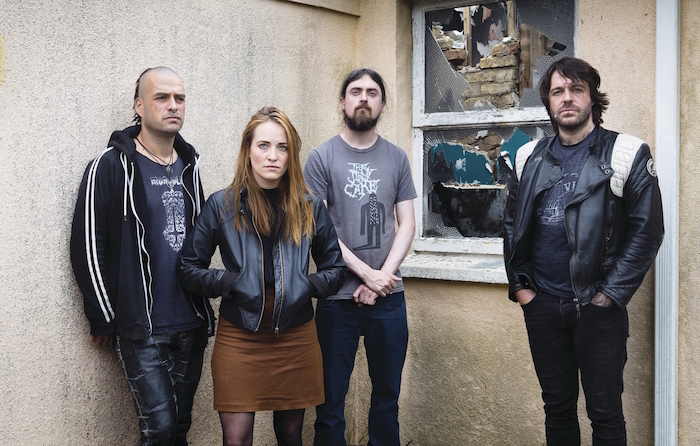 "There is no such thing as ‘purity’ in that respect in traditional music," Ian continues. "In Irish trad 60 years ago, there were no bouzoukis, that’s from Eastern Europe; the accordion isn’t native, that’s an Italian instrument; the concertina has only been around since the 19th century; the fiddle came in in the 16th century; the reel is from Scotland. All these elements originated in other cultures. So what’s purity? It’s something that’s evolving.”

Lankum are clearly at the forefront of the next evolution of Irish trad as Galway will see when they play the Róisín Dubh later this month. “This will be our fourth time to play Galway,” says Ian. “We played there as Lynched as well, in St Nicholas’ Church, and the Róisín Dubh two years ago. We always get good crowds and a good turnout in Galway.”

Lankum play the Róisín Dubh on Sunday March 11 at 8pm. Tickets are available from www.roisindubh.net; the Ticket Desk at OMG Zhivago, Shop Street; and The Róisín Dubh.