ONE-MAN comic maelstrom Jason Byrne whirls into the Town Hall Theatre on Saturday March 10 at 7.30pm with his new show, The Man With Three Brains, which has been drawing rave reviews and sell-out crowds.

Jason has three brains which kick into action when he hits the stage. His left brain scans the audience, looking for improv moments. His right brain collates stand-up material and stunts, poised to dish out the funnies at speed. His centre brain is Jason’s coach, pushing him to the limit. This laugh-a-minute show peels back the madness inside Jason’s head to reveal all three brains working individually.

The comedian has been touring the show for several months, so it has morphed and mutated a few times along the way. “I am basically the amoeba of comedy; every show of mine changes all the time,” Jason tells me. “As the months pass I get bored and I put new stuff in; people ask me ‘Why not just do the same show for a while?’ and I always say ‘Nah, I don’t think I could do that!’

"The Man With Three Brains is a fun title and all it needs is a chaotic situation where I’m dealing with absolute madness on the stage and that’s the show! People are going to get up onstage with me and do a bit of a dance routine and other stuff so there is all sorts going on. I only chose the title because somebody said to me after a gig; ‘You’d need more than one brain to do that show’. “I said ‘that’s a great idea I’ll call it The Man With Three Brains because I always separate my stuff into three sections which are stunts, stand-up, and improv, so that’s what the three brains are.

"Anyway it’s just stand-up so it’s a bit daft if someone goes ‘Well I didn’t see any mention of three brains!’ It’s just not that kind of gig. That’s the chaos of the whole show, nobody knows what will happen and that’s why each show is always different. It depends on who I am talking to in the audience, it depends on who’s on stage with me, it depends on what type of material the crowd like.”

During the show, Jason also talks about the vasectomy he underwent last year. “It’s not the most welcome procedure,” he notes, wryly. “If anyone is messing about with you in that area it’s not great, and especially when it’s medical. As I say onstage, even when your missus is messing with your balls you feel a bit nervous, but when it’s a guy with a knife!

"The scary thing is it was so fast, you go in, a snip and that’s it, no more sperm. I describe the whole thing in much more detail on stage, I bring the audience through the more emotional parts of it all and they love that. You can see the men crossing their legs and wincing whereas the women always cheer when I say I’ve had a vasectomy. I don’t know why; I presume it means they don’t want babies inside them all the time!” 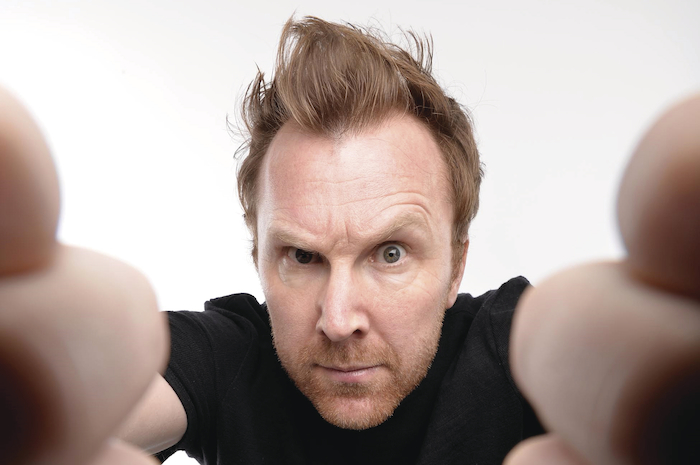 Audience participation is a big part of Jason’s show and I ask does he have a ‘feel’ for which punters to rope into his act? “I’m used to getting people up onstage and I know what kind of people are sitting in front of me,” he replies. “Because I’m doing the show in two halves I can work out who’s likely to get up and who won’t from just quizzing them a bit and seeing how they react. In the past, I’ve gone out onstage and grabbed somebody immediately to come up and that was nuts. You do know by their body language how they’ll react. I normally get good people up and it’s very rarely that I pick someone who doesn’t work.”

The past few years have been mega-busy for Byrne. As well as fronting a comedy chat show, Jason Byrne's Snaptastic Show, for TV3, he also co-hosted the hugely popular entertainment programme Wild Things on Sky1, and is one of the judges on the new TV3 series of Ireland’s Got Talent. Another recent project was comedy short, The Rug, which Byrne co-wrote with Sharon Horgan, and in which he and Amy Huberman played a married couple who steal a rug. Byrne would like to write a series around these characters.

“I’m working with Merman, Sharon Horgan’s company, on all that stuff," he says. "The hard thing is trying to get stuff going because there aren’t enough slots on TV anymore, so we’re thinking of just doing it on YouTube. Putting a show on the internet is quicker and easier. Stand up is still my main thing, I’ll be gigging in Ireland to the end of March then I’m off to Australia until mid May which takes me into the summer, and that’s when I focus on TV stuff. Then the whole month of August I’m in Edinburgh and a UK tour starts after that, so the big challenge with TV projects is just finding the time, but I expect to get at least one TV project off the ground this year.”

Finally, Jason has a special invitation for any parents of demanding teens; “The second half of The Man With Three Brains has a big bit about the young people of Ireland. We’re just giving them everything all the time and they’re not earning anything anymore," he says. "Leo Varadkar is advising them get the house deposit off their folks and we’re handing them I-phones and whatnot, so I have a lot of stuff on that. So bring your teenage offspring along and I’ll rip into them for ya!”

This is a 'Róísín Dubh presents...' event. Tickets are available at www.roisindubh.net, the Ticket Desk at OMG Zhivago, Shop Street, The Róisín Dubh, and the Town Hall Theatre (091 - 569777, www.tht.ie ).