ONE OF Russia’s foremost theatre companies, Theatre U Mosta, visit An Taibhdhearc this weekend to perform Nikolai Gogol’s Marriage on Saturday, and Martin McDonagh’s The Cripple of Inishmaan, on Sunday. Both performances are in Russian with English surtitles.

Theatre U Mosta are from the city of Perm, in the Urals, and was founded in 1988 by Sergei Fedotov, who remains the company’s artistic director. ‘U Mosta’ means ‘at the bridge’. The name was initially inspired by the theatre’s proximity to a bridge over the Kama River, but it also became a brand, expressing the company’s artistic vision.

Fedotov’s productions are a bridge between the real and the supernatural, the usual and the mystical, the conscious and subconscious, and they always have the element of mystery, when supernatural forces enter the stage. This expresses the director’s specific view on the theatre, the nature of human beings, the relationships between the inner self and the outer world, fate, the power of great forces over people. The company expresses its aesthetic with the slogan: “U Mosta - Mystic Theatre, where everything is real, and the Theatre is Real, where everything is mysticism.” Mysticism, in this case, becomes a metaphor for the artistic method, which aims to find ways of expressing the deep, the unseen, related to the human subconscious, on the stage.

One striking feature of Theatre U Mosta’s work is that the company does not limit itself to staging just one play by a chosen author but performs cycles of his/her plays. This approach enables them to delve into the very essence of the author’s world. The company first became widely known after staging a cycle of plays by Gogol which explored the author’s inherent mystical world view. Gogol’s plays are mostly staged as comedy or a satire but Fedotov’s productions showed that there is a devil in each of Gogol’s works. In Marriage all the characters exist in a fantastic world, possessed by the power of the devil, who is manifest in the person of the conniving Kochkarev. 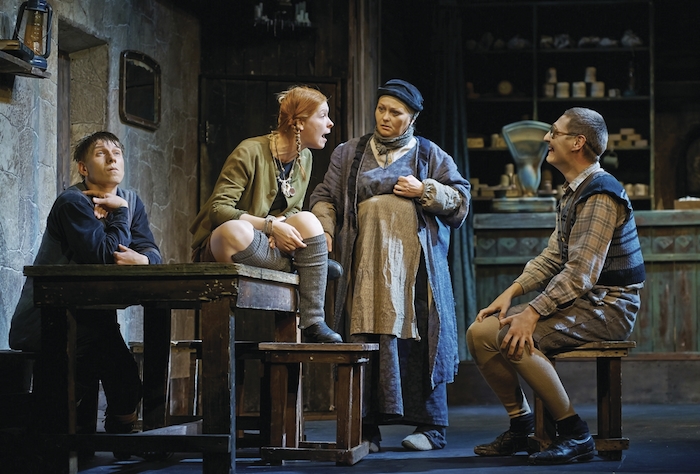 Theatre U Mosta has also staged all eight plays by Martin McDonagh, and was the first company to introduce him to Russian audiences. The company has also hosted two International Martin McDonagh Festivals, in 2014 and 2016, showcasing productions by a range of European companies. The company has toured widely and was awarded the Grand Prix at numerous international festivals. In 2010, U Mosta’s The Cripple of Inishmaan, won Russia’s prestigious Golden Mask National Theatre award and got the special Jury prize.

Now, Galway audiences will be privileged to witness this brilliant company’s Irish debut, which is part of Ireland’s Festival of Russian Culture. First up is Gogol’s Marriage. Instead of the social comedy which the play is usually presented as, U Mosta give us a phantasmagoria of wonders, incredible logic and unbelievable actions. 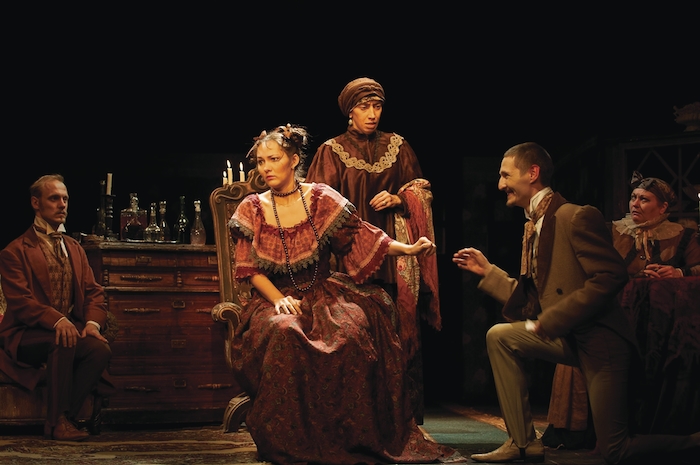 The play revolves around the fierce rivalry among competing suitors of a dubious bride to be and at the centre of the action is Kochkarev, a human imp who creates diabolic things on the stage. Strange visions scare and excite, and Gogol’s mysticism concludes with images of loneliness and man’s defencelessness in the face of Life’s eternal temptations and contradictions.

Of special interest to playgoers here, given Martin McDonagh’s Galway links, will be the company’s presentation of The Cripple of Inishmaan. This is an uproarious black comedy set against the backdrop of the filming of Robert Flaherty’s Man of Aran. On 1930’s Inishmaan, the islanders are excited to learn of a Hollywood film crew's arrival on Inishmore. 'Cripple' Billy Claven, eager to escape the gossip, poverty, and boredom of Inishmaan, vies for a part in their film, and to everyone's amazement, he gets his chance. The Cripple of Inishmaan sees eccentric island characters trade stories to within an inch of their lives while a young man tries to make sense of who he is. 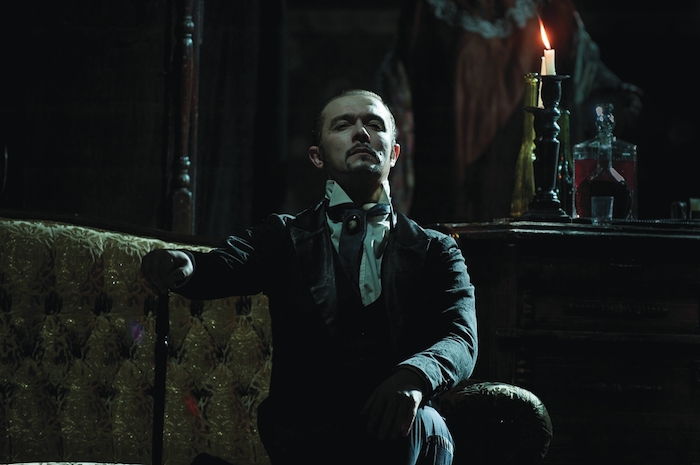 The play makes clever use of the plot-element of Robert Flaherty’s documentary. Flaherty is creating a film idealising the ‘close to nature’ lifestyle of the islanders yet the islanders themselves view the film company as offering a possible escape from the hated routine of their existence.

In Theatre U Mosta’s Cripple, Fedotov reveals a completely different, non-brutal, McDonagh, and discovers the lyrical depth of his stories. The Perm director has managed to recreate the unique nature of McDonagh’s humour, to release the energy of the comic, enabling the actors to compose their characters as true ‘queer folk’, hiding a fierce and desperate struggle with reality and all its political and historical catastrophes behind their strangeness.

The secret of such success stems from the fusion of ideas between Sergei Fedotov’s mystical theatre and the paradox and distinctive logic of McDonagh. The word ‘paradox’, constantly repeated by the director in relation to McDonagh, is actually his own artistic method not only in the style of the performance, but in the process of his work with the actors. McDonagh’s scripts presume an original artistic world, in the centre of which there are weird characters. McDonagh’s thinking is concentrated in them, and the absurd contradictions of their mindset. The stylistics of the U Mosta Theatre, built on the work with psychophysics and the energy of an actor, is perfect for discovering the language of McDonagh. 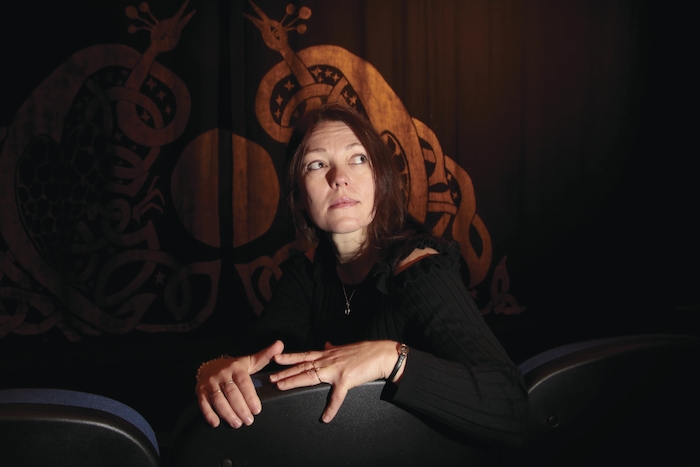 Last week, ahead of U Mosta’s arrival at An Taibhdhearc, the company deputy artistic director, Olesya Egorova, came to Galway and sat down with me for a talk about their visit (I’d here like to acknowledge the assistance of Galway-based translator Ludmila Snigireva in conducting the interview ).

Olesya declared how excited everyone in the company was to be bringing their staging of McDonagh to Galway and then told me why they chose Gogol’s play to pair with it: “Sergei Fedotov’s main idea is to demonstrate the mystic quality in the plays we do. When we were thinking about coming to Ireland the key point about choosing Marriage was that it gave Sergei the opportunity to show links between Gogol and McDonagh, their shared humour, mystical threads and quality of the grotesque.”

What attracted U Mosta to McDonagh’s work? “Sergei first saw Lonesome West performed in Prague. He then translated it into Russian and staged it, and McDonagh became popular throughout Russia and U Mosta went on to do all his plays. Six years ago Sergei visited Ireland for the first time and I came a year ago, and for both of us this country feels like a second home. We feel a strong connection between Ireland and Perm in the Urals; it is an absolutely vivid sense of two countries as one. That is part of our passion for McDonagh’s work.” 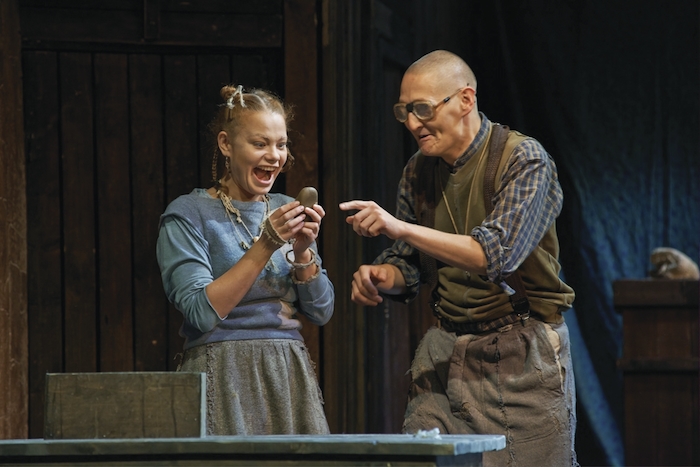 Olesya tells me about the company and Fedotov’s quality as a director. “Sergei follows the classical Russian tradition of collaborating with his actors which was pioneered by Mikhail Chekhov and Jerzy Grotowski. Each U Mosta production is an emotional trip, subconscious perceptions of the world are transmitted from the actors to the audience. There is a bridge that connects two worlds in our life, the world that is here and the otherworld and they interact. Every year we present five or six world premieres at our theatre and visit 10/12 festivals all over the world. This is our first time in Ireland, but hopefully not the last!”

Both shows are at 8pm. Tickets are available from An Taibhdhearc, Middle Street (091 - 562024, antaibhdhearc.ticketsolve.com/shows ).