GLOBE-TROTTING Gaeilgeoir extraordinaire, Manchán Magan, brings two delightful interactive shows to the Town Hall Theatre next month, where he will invite audiences to explore and celebrate Irish language and culture.

In the first show, Gaeilge Tamagotchi, Manchán will invite audiences to adopt an Irish word. Participants wind through a labyrinth of 30m of raw Irish linen to receive an endangered Irish word, of which they agree to take guardianship. In the second show, Arán & Im, Manchán bakes sourdough bread for 70 minutes while offering insights into the wonders of the Irish language. It is a celebration of language, land, and local food, with freshly-baked bread for the audience to slice and spread with butter they churn themselves from Irish cream. 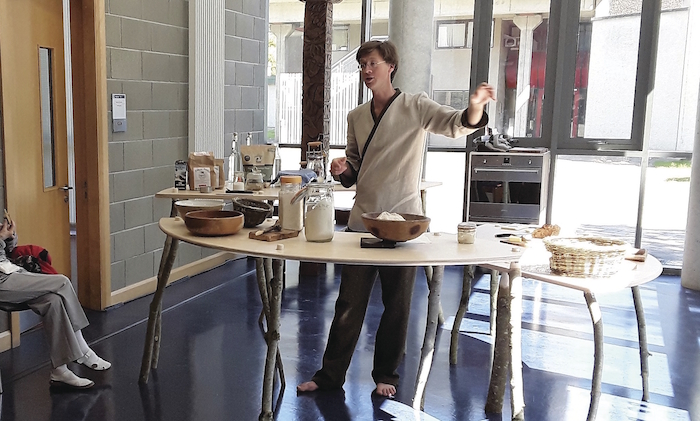 Ahead of his Galway visit, Manchán chatted with me about the shows, beginning with Gaeilge Tamagotchi; “There is such value in beautiful old Irish words and I wanted to create a ritual that would honour these words individually,” he explains. “I envisaged people entering a sensory space that would make them take a pause out of their ordinary life and where I would offer them a word to look after. I teamed up with architect Tom de Paor, who designed the Pálás cinema, and he suggested a labyrinth people could wind their way through. I wanted it made from Irish material so I got a bolt of Antrim linen and Tom designed a very aesthetic and artistic structure around that. Then, in 2015, I put Gaeilge Tamagotchi on in the Project Arts Centre as part of the Dublin Fringe Festival. I thought just a few people would come but hundreds turned up; they came on buses from Sligo and Cork and Mayo to see it, people liked the significance of it.”

Manchán’s chosen ‘word guardians’ took their task to heart; “I’ve had people come up to me on the streets of London and New York and open their wallets to take out the word I had given them and show they still had it with them,” he relates. “Someone sent me a photograph and they had tattooed their word onto their skin. I am regularly meeting people who remember their word.” 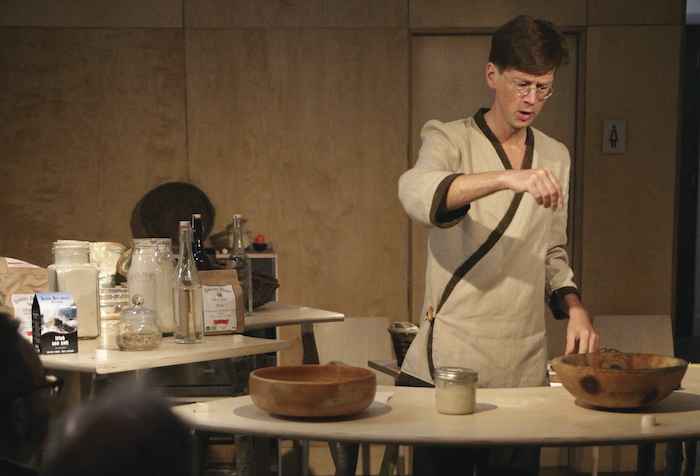 I ask Manchán if his travels have influenced his views on language; “Absolutely!” he replies. “When I’m with the Yami islanders, who live off Taiwan and have their own word for every rock and every crease on the ocean, they tell me ‘We are a sea people and you are too’ and they’d sing about the creation myth of their people. When they do that I remember straight back to my childhood in the Dingle peninsula where Blasket Islanders would also sing songs and tell me stories. We’ve encoded our folk memory in language and you’ll find that in every indigenous culture. When I am doing Gaeilge Tamagotchi I say we need to safeguard all the words in all languages; native cultures and heritages and the words that are part of them are important.”

Arán & Im offers an experience audiences can literally get their teeth into; “People are getting back into culture and heritage through home crafts and I wanted to connect that in a show with the Irish language,” Manchán declares. “The idea is that I bake bread and as I do so people can talk with me about the language. 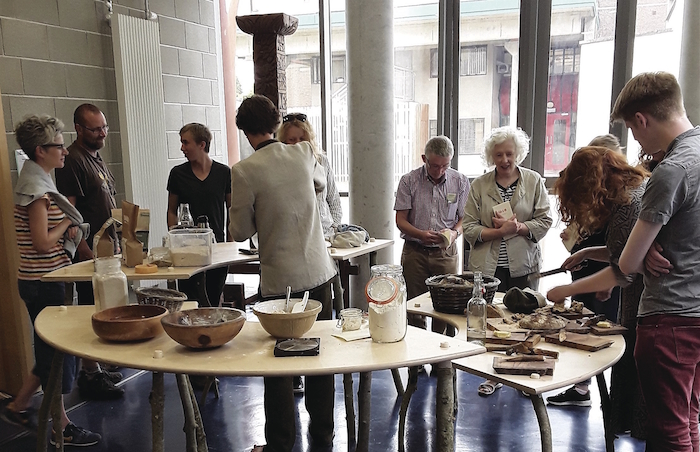 "When I was doing the TV series No Béarla a decade ago people had so much to say about Irish; I could see in their eyes a mix of shame and regret, fear and love that they had about the language. This show evolved from that and in it I talk about how the idea of different dimensions are built into Irish culture, with the sidh and the spirit world, and that connects beautifully with sourdough bread-making. It looks like you are just folding flour but underneath the surface five billion different bacteria and 50 million wild yeasts are transforming the flour into this staple of life, bread.

“The shows are not just about Irish but honouring our past and culture and I connect them with native crafts,” Manchán concludes. “In presenting them I wear Donegal tweed and Irish linen and the set of Arán & Im is made from ash trees from my woodland. It is about connecting the Irish language with Irish products and Irish crafts and with all the mythology and culture that lies behind the language."