AS THE rains return at the end of what has been the finest summer in many years - some would say decades - it seems an appropriate moment for the release of Songs From Blue House, the new album by Galway singer-songwriter Yawning Chasm.

Songs From Blue House is a beguiling collection of intimate, melodic, ruminative, indie-folk pop from Yawning Chasm (aka Aaron Coyne ), which was recorded as the rain fell persistently and heavily, one afternoon in August last year.

“I use my father’s shed out the back a lot for recording,” Aaron tells me as we sit for the interview on a Monday afternoon as the sun shines. “This time last year I attempted to record for a few days, but wasn’t happy with the results. I had written these songs on a baritone ukulele, but was recording them using a lot of electric instruments. It just felt as if I was trying to force them into a different medium.

“I took a step back, then set up a microphone, got out acoustic instruments, and started recording. Outside it was this brutal, torrential, rainfall, but I felt more comfortable. When I’m working I can be very self-conscious, but I knew there wasn’t anyone around me for about 50 feet. So it all happened very quickly. I did the vocals and vocal overdubs in one go, and the whole thing was done in about two weeks in August 2017.”

The 12 songs making up Songs From Blue House were written the previous summer. “They were the result of a relationship break-up,” Aaron says. “That creates an emotional intensity that’s hard to fake. It wasn’t a bad break-up, it was amicable, but the time following it was still incredibly lonely, that’s the over-riding sense I have of that time, and that fed into the songs - isolation, and not knowing what the future would be.”

Yet, despite the sadness of the song’s origins, they are the most accessible and accomplished Aaron has yet written. There is a gentleness and melodiousness that draws the listener in, and a conciseness and compactness (the album clocks in at 33 minutes ) which only adds to the intimate feeling of listening to a genuine sharing of thoughts and emotions. 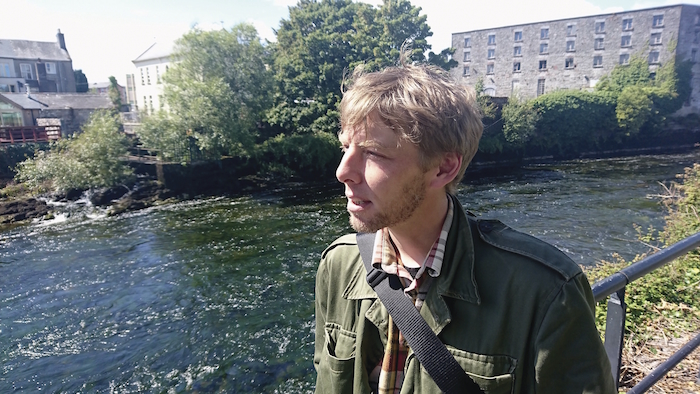 “They are really accessible,” says Aaron. “I don’t think the songs are too downer, even though they are not up-beat either. I very consciously wanted the songs to be compact, to have an economy of elements, uncomplicated. I think when you do that, you have to do more with your voice to colour it, and that pushed me to make the songs more melodic.”

Aaron recorded the album using a baritone ukulele, the largest instrument in the ukulele family. He was drawn to it because of it’ similarities to his usual axe of choice - the tenor guitar.

“Tenor guitar is a four-string, steel strung, guitar, tuned in fifths like a mandolin,” says Aaron. “I came across the baritone ukulele on my travels and discovered you could tune it in the same way, and use nylon strings on it, so for me, it became like a classical tenor guitar. It’s got a mellowness about it that sometimes suits my mood - it certainly did when writing these songs. They just seemed to ‘come out’ of the instrument. I’m not sure I could have written them on another guitar.”

In its song titles (‘Bamboo Forest Patterned Glass’, ‘The Moon Is Always Full’, ‘A Winter Tree I Dream Leaves’, ‘Rewind The Garden’ ), and its lyrics, there are constant references to colours and the environment. Their inclusion reveals much about how the artist sees, and interprets, the world.

“Lyrics are always subconscious, I tend to put meaning on them afterwards,” says Aaron. “As for references to colours, blue is mentioned a lot on the album. For me it’s a safe colour, a warm colour - despite its associations with coldness - it’s a protective colour for me. Though I don’t put much stock in chakras, blue is the chakra for the throat and the voice. Blue is a colour that speaks to me.

“The environment referenced in the lyrics is the urban landscape, the ‘un-natural’ world of the man made environment. You have to take the beauty from it when you see it - it might be just a shadow on a wall, the colour of something. The sound of rain hitting a window is a reminder there is a wild world that is out there.” 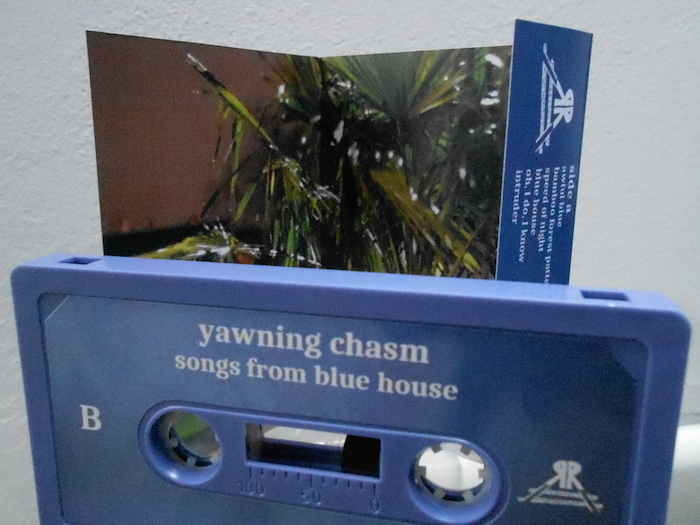 Songs From Blue House was released on the independent Galway record label Rusted Rail and is available in the form of a blue cassette tape. Aaron’s music collection began when he bought Dire Straits’ Brothers In Arms on cassette in 1986, and he likes that his latest release is also in that format.

“I always bought cassettes more than vinyl, they were more convenient, and I could play them on my Walkman,” he says. “The reason to release this album on cassette is aesthetic, it’s its ‘physicalness’. It’s not a CD, which, to me, feels more disposable than magnetic tape does - although my next release will be on CD. For Songs From Blue House it’s nice it’s on cassette. There is something slightly magical about magnetic tape. It’s more mysterious than vinyl, there is something kind of, timeless about it.”