THE F-WORD, the city’s annual Feminist Festival returns from August 6 to 12, with an array of events ranging from music gigs, storytelling, workshops, political discussion, the visual arts, a march, a swim, and even bicycle repair!

The festival is organised by the Galway Feminist Collective, and according to members Áine Ní Threinir and Élisa Querré, it will be seven days of “art, culture, creativity, politics, protest, and education”.

With the internet giving sexism and misogyny an unprecedented platform and exposure; the election of Donald Trump as US president; the rise of the so-called alt.right; and attitudes to women and women’s rights exposed by the debates around the Belfast Rape Trial and the Eighth Amendment referendum, feminism has had a dramatic resurgence. Far from being the ‘dirty word’ it once was, feminism has demonstrated it’s relevancy as an integral part of any social justice campaign, and increasing numbers of women are now identifying as feminists.

“We don’t look at feminism as a nice section of the wider social-justice issues,” says Áine. “We see it as interlinked and integral to the struggle against capitalism, which is linked to patriarchy and climate change. Feminism is for everybody, not just women, but also men.”

“Feminism is about benefiting all of society,” Élisa says. “Women, non-binary people, and trans people are also part of society, and the promotion of their rights is good for society as a whole. We hope men will see that feminism is not about being ‘against’ them, it’s not anti-men. It’s about marking a better, and more equal, society.”

What's happening at the festival?

The F-Word begins on Monday August 6 (7pm ) with the ’Women/Non-Binary/Queer Bike Repair Night at the Galway Community Bike Workshop, University Road; then a ‘zine making’ event on August 7, with demonstrations on how to make fanzines or other impromptu magazines and publications in The Secret Garden, William Street (6pm ); while on August 8 there is Storytelling Night in De Burgos (7pm ). “The theme for Storytelling Night is ‘Little Revolutions’,” explains Élisa. “Everyone is invited to tell true stories about their own experiences, so that we can exchange and learn from each other.

Events on August 10 will see a public talk and discussion entitled Realising The Right to Work and Ending Direction Provision, an event in association with the Movement For Asylum Seekers Ireland, in the Foróige Club, Fairgreen Road (6pm ), followed by one of the festival’s main events - the Reclaim The Night March, which begins at Eyre Square at 9pm, before proceeding through the city centre.

“Reclaim The Night began in the 1970s in the USA,” says Áine. "It was about literally reclaiming the streets, and having the right to walk through town and not be subjected to sexual assault or violence. We thought it was really apt, given some of the things that have happened this year. The event will have speakers and representatives from various local groups. We see it as a intersectional issue, for while these issues predominantly affect women, they also affect many other groups and people in society.”

August 11 is the major day of the festival with a series of workshops on a variety of issues, culminating in an afterparty and music gig. “Saturday is the workshop day,” says Áine. “It’s about giving voice and a platform to people and groups who are on the margins, and who don’t fit into the mainstream.”

Workshops take place in the Galway Community Bike Workshop, and begin with Transfeminism, in association with AMACH! (11.30am ) which will look at the experiences of Transwomen; Dirty Players: Ireland and Climate Change, with the environmental group Not Here Not Anywhere (12.30pm ); Anarchism and Co-operativism, with Fionnghuala Nic Roibeaird, of the Workers Solidarity Movement, and Emily Waszak of Migrants and Ethnic Minorities for Reproductive Justice (2.20pm ); Decriminalising Sex Work, with members of the Sex Workers Alliance Ireland (3.30pm ); and Reclaiming Tenancy Rights, with speakers from Acorn, a British tenants union, the Dublin Central Housing Group, and the Galway Housing Support Group (4.40pm ).

“It’s always a necessary time to be a feminist,” says Élisa. “A festival like this is an opportunity for people to meet. While Galway is a small city, and everybody can know everybody else, there are individuals and groups who still might not be aware of each other or have the chance to interact. The festival gives them that opportunity and to see how their concerns overlap.” 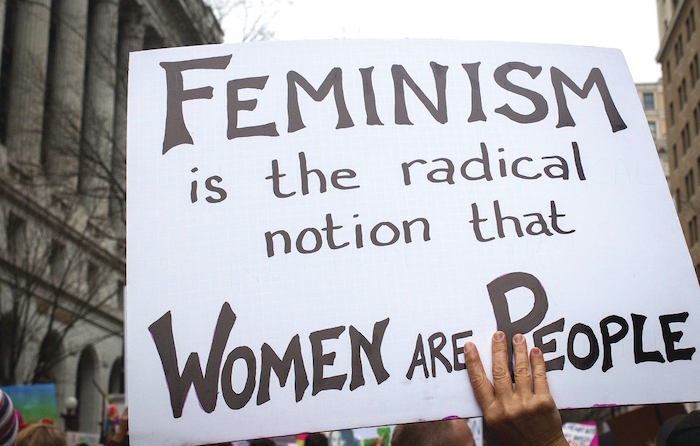 The Galway Feminist Collective defines itself as an Anti-Capitalist, Intersectional Feminist Group. “We try and organise in a way that is non-hierarchical and that reflects all of the changes we want to see in society,” says Áine. “A big emphasis for us is collaboration and co-operation. We value all kinds of perspectives and experiences.”

A number of times during our conversation, the term “Intersectional’ has come up. It’s a sometimes controversial, sometimes misunderstood, term, but one that is increasingly important to understanding modern feminism.

Intersectionality is a concept initially developed by the American legal scholar Kimberlé Crenshaw in 1989, and describes the ways in which racism, sexism, homophobia, transphobia, xenophobia, or classism, etc, are interconnected and cannot be examined separately from one another. In practice this means that just because a person might be female, disabled, or be a person of colour, or have a certain body type, does not mean that their experiences of sexism, or racism, etc, or is an exact match for experiences of other kinds of oppression, or even exactly like sexism, ableism, or racism for someone else. The term seeks to recognise these differences, but also to create understandings and dialogue among people who have undergone these varying levels of experience.

“It’s about creating a space to create together,” says Élisa, “and about showing the diversity of struggles and experiences. We’re interested in showing how diversity is important and in what has to be achieved in order for diversity to thrive. That’s what we’re trying to do with this festival.”

What is to be done? 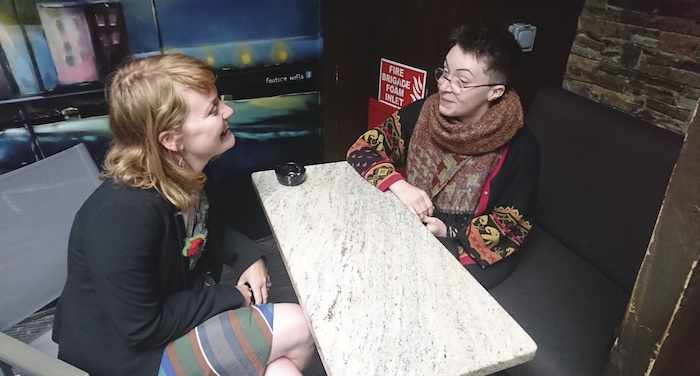 Feminism then, remains an on-going project, and on-going struggle. While the emphatic victory of the Yes side in May’s Eighth Amendment referendum was a major milestone for women’s rights in the Republic of Ireland, as Élisa points out: “There is still much to do regarding body positivity, transphobia, sexual violence, slut shaming, issues in the heath care system, and racism.”

And Áine plaints out there is a role men for men to play as well. “We need allies,” she says. “It was great to see men supporting the Repeal movement. This is about women fighting for their rights, but there are things men can do within the spaces they occupy, it’s about talking to their friend on issues and calling out sexism and misogyny when they see it.”

Élisa concludes: “The equal, fair, and compassionate society we envisage is possible. It won’t happen tomorrow, but we can see it and can play a part in making it happen. If that’s the kind of society you see as well, then you’re in the same boat as us.”

To find out more about the festival see Galway Feminist Collective on Facebook.