SINISTER, ABANDONED, fairgrounds; iconic Galway buildings, sharp and in detail, against the haze of a multi-coloured mist; young girls wandering in places where nature and urban landscapes share space uneasily - this is After The Future.

After The Future is the arresting new exhibition from Galway artist Jennifer Cunningham, currently running in the Festival Gallery, Market Street, as part of the 2018 Galway International Arts Festival. Featuring paintings, models (which Jennifer’s daughter helped with ), and a short film, it presents Galway, as well as old fairgrounds the artist found in Japan, England, and the USA, as strange, slightly un-nerving, yet compelling places in which to wander.

“I’m always trying to create an eerie atmosphere in my work,” Jennifer tells me, as we meet to discuss the exhibition on a Tuesday morning. “I want to make people look at things in a different way, and when I paint I don’t want it to just be a straight representation.”

Jennifer has been working on the pieces for this exhibition over the last four years, and thematically, they follow from her previous GIAF exhibition, 2012's Just Add Water, in which she depicted Salthill landmarks through a very personal lens. This time, her remit is wider, including Galway, the aforementioned fairgrounds, and landscapes and places that do not exist physically, but which are inspired by real places and re-imagined to show how the artist sees the world around her, and to reflect on memory, childhood, and our relationship to the built environment. 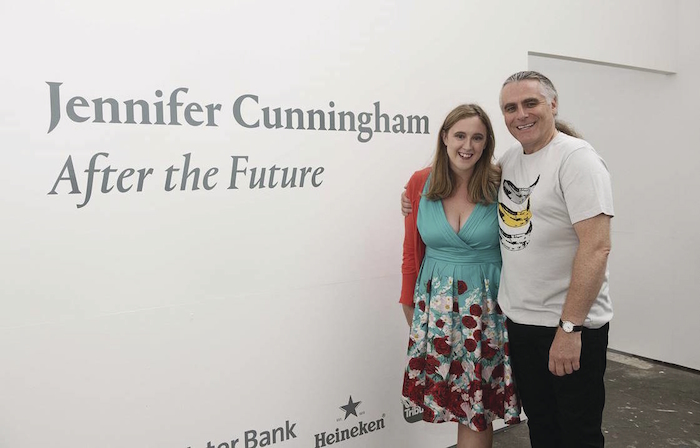 A delight of After The Future is its depiction of Galway landmarks, such as the existing (Seapoint and Leisureland ), the vanished (The Hangar in Salthill Park ), and the abandoned (Corrib Great Southern Hotel ) and how these will prompt memories and recollections in many viewers - precisely what the works are meant to achieve.

'I like the fact it’s up to the viewer to make up their own mind about the work, what it is, what it’s about'

“The Hangar is long gone, it was gone before I was born, but so many people still talk about it,” says Jennifer. “Seapoint is still there, but is no longer used as a ballroom, and I’ve heard people use the expression, ‘As the sun was setting on Galway Bay, the sun rose on many new relationships. Paul Fahy’s parents met there. I think there is something so rich about these places.”

For a Galwegian whose childhood and teens were during the 1980s and 1990s, there is quite the thrill at seeing ‘Such Great Heights (The Blue Slide )’, a depiction of the slide which stood in the grounds of Leisureland for many years. “Did you ever ‘jump the fence’?” Jennifer asks. “At 14 we were too sophisticated to go on the slide. You wouldn’t pay the 50p in the summer to go on it, but inside you’re still a child and would love to, so you’d wait until winter, when it was closed, and ‘hop the fence’ to get into it. You’d try to get airborne on the third bump!”

The work takes its title from a song by the indie/electro-pop duo, Postal Service, from their 2003 lone, classic, studio album Give Up. “Postal Service are one my favourite bands,” says Jennifer, who loves listening to music while working. “There is a funny poignancy in their work, a bittersweetness, that I really like. It’s the same feeling I try to get into my work as well.”

However, Jennifer’s depictions of built environments, both real and imagined, is not by any means a straight, realistic, representation. They are architecturally detailed and accurate, strongly linear in execution, but with the buildings' colours exaggerated, and deeply imbued with atmosphere. The combined effect creates a deliberately stylised image, standing out all the more sharply for the haze and swirl of abstract colours in which they float. 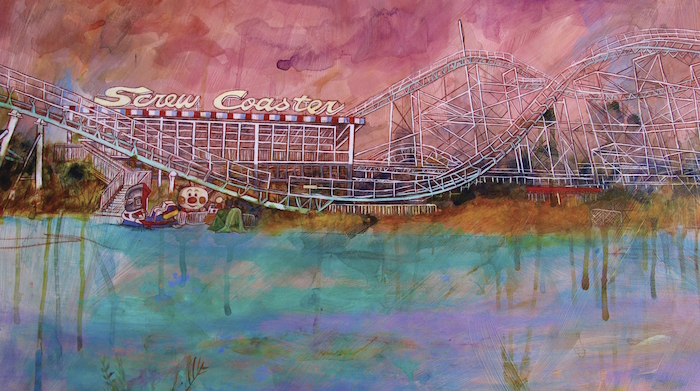 “I was a printmaker originally,” Jennifer says of her working methods. “That’s where my interest in line comes from. After drawing, I put layer washes of thin colour in an abstract fashion over that. There is very little control, it’s left to chance. Then there is a tightly controlled pencil drawing over that again, before it’s sanded back, and there are more washes of colour, then there is more drawing, and it’s sanded back again. It’s a very detailed process.”

This juxtaposition between the detailed and the abstract enhances each work’s sense of being some kind of recollection, or memory. “I like the contest,” says Jennifer. “I like the fact it’s up to the viewer to make up their own mind about the work, what it is, what it’s about. It encourages people to use their imagination and to bring themselves into the work. It’s creating a dreamscape, it makes them into this faded memory that’s being recalled, so they are not realistic, but people know where they are.” 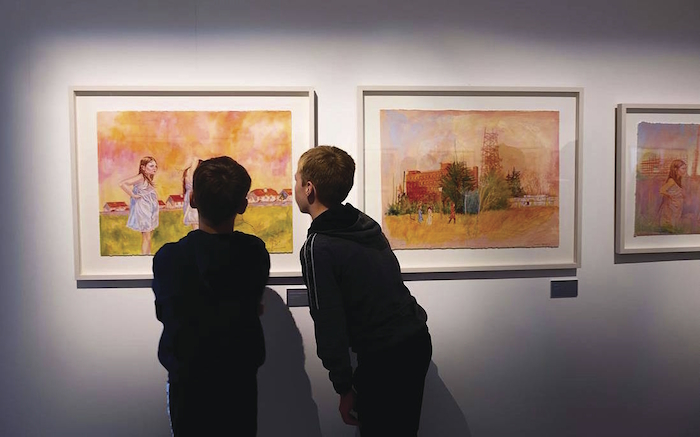 Among the most memorable works in After The Flood are ‘You May Never Bring Back This Day Again’, ‘Narnia’, and ‘Under Construction’ [shown below]. Here, the landscapes are inhabited and humans are the main focus. “The artist Dolores Lynn, who is a good friend of mine, hung those three together, she gave me a lot of advice, and they work well as a triptych.”

The girls depicted in ‘You May Never…’ and ‘Under Construction’ are the daughters of the artist Gianna Tasha. “I wanted to depict children who are at that age where they have their own personalities, and yet at the same time their personalities are still ‘under construction’,” says Jennifer. “Behind them is a building site, but I’ve romanticised it to look sort of like a roller coaster. I’ve also made it fantastical with washes of pinks and mint green, as though it were a nightclub.

'Places ugly to adults can be magical to children' 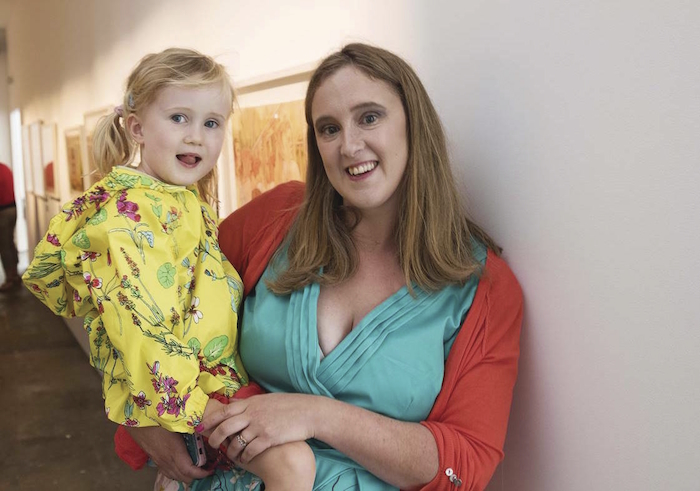 "I’m partially referencing my own childhood in 'Under Construction'," says Jennifer. "I grew up in Castlepark in the 1980s, and across the road, houses were being built. Then the recession hit and building stopped for ages, so the site became a playground for the local children. You always bring your own experiences into the works.”

’Narnia’ depicts three teenage girls, with flowers in their hair, wandering through an area of overgrown grass, overlooked by varying structures. “Places ugly to adults can be magical to children,” says Jennifer, “where they can make their dens and hideouts. It’s inspired by an area in Ballybrit, just across from the Eircom building, where there were all these glasshouses. I went around there. They had collapsed, but that gave them this wave-like form, reminding me of roller coasters. You could sense the past history and that the space was decaying. I'm fascinated by such places. I'll be exploring this vein of nostalgia in my work for a few years more yet."

After The Flood continues up to Sunday July 29. Gallery opening times are 11am to 6pm (Mondays to Wednesdays ) and 11am to 8pm (Thursday to Sundays ). Admission is free.