THE SHOWPIECE theatre premiere in this year’s GIAF is the staging of Paul Muldoon’s great elegy Incantata, which the poet wrote in response to the death from cancer, in 1992, of his one-time lover, artist Mary Farl Powers, who was aged just 44.

Incantata, which one critic described as "one of the pinnacles of Muldoon's art" for its "passionate grief, but also in its tempering humour and humanity", has been adapted for the stage and will run at the Town Hall Theatre from July 18 to 21 and from July 24 to 27. A co-production of GIAF, Jen Coppinger, and Poetry Ireland, it is directed by Sam Yates, and stars Stanley Townsend.

Yates and Townsend, who recently worked together on the acclaimed West End staging of Glengarry Glen Ross, sat down with me over a coffee at the Corrib Tea Rooms to talk about the production and Yeats told me how he got involved. “I was asked a few months ago would I like to direct it and when I read the poem, and thought it was an amazing piece, I thought immediately of Stanley - who I was working with at the time on Glengarry Glen Ross where he was playing Shelly Levene - as the performer. I knew he was the right person to bring Incantata to life in every way; technically, emotionally, and spiritually. And I called him and he agreed and we were on!”

“I didn’t know the poem before Sam sent it to me,” Townsend says. “When I read it, my first thought was ‘Holy shmoley! Can I really do this?’ But I thought the poem was wonderful; there was real purpose in it and I felt we had a real chance to not just deliver the poem but to make a piece of theatre that could illuminate the poem.”

I ask Yates how he envisaged transforming the poem into a piece of theatre. “Always I try to look for what the piece wants or what it responds to,” he replies. “This was written initially to be read and that’s very different to seeing it being delivered by a speaker or performer on stage. We’re trying to conceive it in a Beckettian context, and there are many Beckett references throughout the poem.

'It’s like watching Shakespeare; you’ll come away not grasping every single meaning but the emotional power and humanity and cumulative effect of the writing is greater than the sum of its parts'

"The speaker is someone who is, in Muldoon’s phrase, ‘in a very specific nowhere’ trying to make sense of grief and remembering someone who was lost to him very suddenly. He seems to be trying to reach across the void and connect somehow with this person who is gone. So a lot of the interest for us at the moment is about watching someone trying to create a piece of art and, in doing so, is also trying to reach the person who is gone.”

While Muldoon’s poem revolves around his life with, and feelings for, Mary Farl Powers, and his grief at her early death, the stage version of Incantata moves away from that narrowly biographical aspect. “We’ve researched into Mary Farl Powers’ life and work and she was an extraordinary, powerful figure,” Townsend notes. “For our protagonist, she and ‘the imagined she’ are very real presences on the stage with him. How much of it will be Mary and how much will be an imaginative figure is up for grabs. The piece is about one artist remembering another and trying to connect.”

Townsend enlarges on the interplay between art and life that animates both the poem and the stage version. “When we met Paul Muldoon I said to him that there seems to be a journey in the poem between the first half where the protagonist is wrestling with the conflict of making a piece of art and using his grief to make a piece of art, then there is a fulcrum where the poem tips into just remembering. There is a kind of humility in that, as if he suddenly decided ‘don’t try to make a piece of art, just remember’.

"When I said the word ‘humility’, Paul immediately replied ‘humility in the face of it all is something I can connect it with very deeply’. And he was completely generous to us in saying ‘it is yours to do with what you will’ which was very trusting and that released us into the possibility and potential of it not being Paul Muldoon or not being Mary Farl Powers; of course these are the sources – he wrote the poem and he wrote it about her – but we are making something from this that is imaginative and interpretative and sprung with those lives but is also new and hopefully will illuminate the poem.”

Incantata, like much of Muldoon’s work, is full of literary and cultural allusions but Yates holds no fears that its freight of references could prove difficult for audiences; “I think the key thing is that you’ll be watching Stanley use that reference and from his delivery you can get a sense of what the reference means from how it is played and what it means to that character; that’s your immediate way in.

"Whether or not you get the intricacies of the phrase I don’t think is vital to the live experience. It’s like watching Shakespeare; you’ll come away not grasping every single meaning but the emotional power and humanity and cumulative effect of the writing is greater than the sum of its parts. Academically you could write volumes about a great painting but seeing and experiencing it personally will always overpower any academic footnotes and I think that is also true of Incantata. Ultimately, you are watching an artist trying to create something in memory of another artist so I think those other details, although they’re fun and we’ve researched them and will try to give a sense of them, they are secondary to the main quest.” 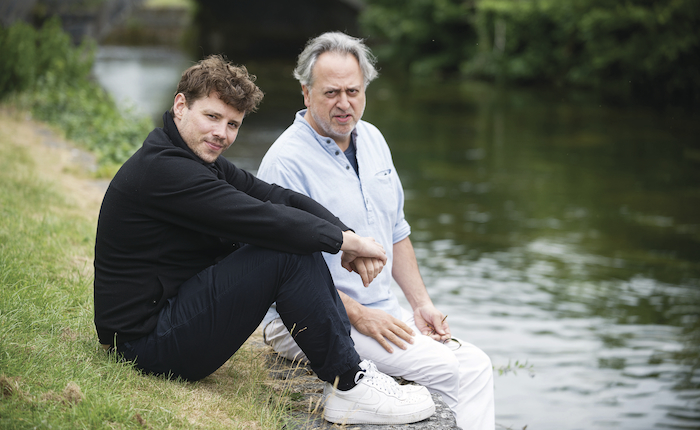 As it builds towards its finale, the poem’s language and rhythms become incantatory; “There is definitely a ritualistic rhythm that goes through it,” Townsend agrees. “You feel a part of something that’s old; an ancient bardic tradition of speaking for us to remember. And as as a way of remembering it seems fitting to tell a story through verse.”

Yates’ production also boasts an A-list design team, including composer Teho Teardo, videographer Jack Phelan, stage designer Rosanna Vize and Sinead Diskin on sound. “I enjoy the idea of artists talking to one another across time and our staging of Incantata is a conversation with Paul’s work and Mary’s work,” Yates concludes. “It’s another flower on the stem. Incantata is like a spell being cast or incantation and there is something about being in the same room as a person saying words that transports us to a higher plane that is quite magical.”

Tickets for Incantata are €20- €25 and the show’s running time is 45 minutes. For performance times (including its preview shows on July 16 and 17 ) see www.giaf.ie There will be a post-show talk after the evening performance on July 19, moderated by NUIG’s Patrick Lonergan.