REHEARSALS BEGAN this week for Druid Theatre Company’s production of Shakespeare’s Richard III, directed by Garry Hynes, and which runs at the Town Hall in the last week of September.

The production sees the continuation of Druid’s exploration of Shakespeare’s kings which it began with 2015’s stunning DruidShakespeare. Richard III’s stellar cast includes Aaron Monaghan [pictured below with Ingrid] in the title role; Sean McGinley and Marie Mullen appearing in a Druid play together for the first time since 1990; Marty Rea, Garret Lombard, and Jane Brennan; while Ingrid Craigie plays the Duchess of York, Richard’s mother.

Craigie has long been one of Ireland’s foremost actors; featuring in premieres of plays by Brian Friel, Marina Carr, Sarah Kane, and Billy Roche, and acting alongside Cyril Cusack, Ralph Fiennes, and Donal McCann. Her previous Druid appearances were in the 2011 tour of Cripple of Inishmaan, and in 1990 in Geraldine Aron’s The Donahue Sisters and Louis d’Alton’s Lover’s Meeting (co-incidentally, Lover’s Meeting is also the play in which McGinley and Mullen last shared a Druid stage ). 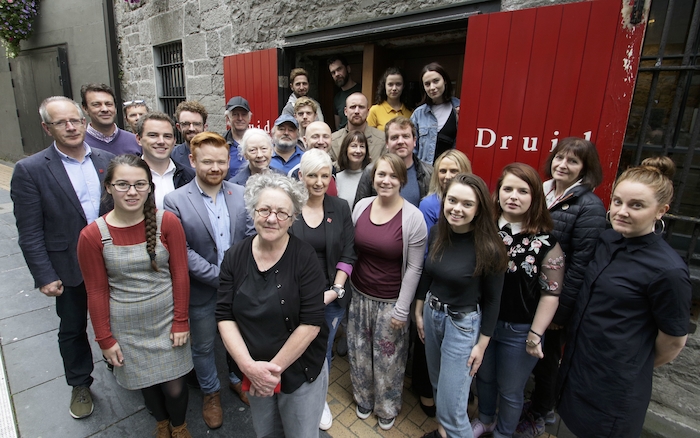 On Tuesday morning Craigie talked to me about working with Druid again and to share her thoughts on Shakespeare. I began by asking if she has fond memories of her earlier Druid roles?

“I remember Marion O’Dwyer and myself coming down from Dublin to do The Donahue Sisters; we’d heard all these stories about Druid and how Garry could be cross and would shout at people so the two of us were terrified,” she recalls with a smile. “We agreed between ourselves that if that happened we would say ‘Sorry, but we don’t do shouting’. As things turned out we just laughed the whole way through rehearsals. I had the best time. Lover’s Meeting was such a brilliant experience, I loved doing it; we really took the play apart and put it together again and toured with it as well which was fantastic – that was the first time I was out on Inis Meáin. I’ve always loved working with Garry. I’ve worked with her at the Abbey as well as my few shows with Druid.”

Given her long list of illustrious roles, it’s surprising that Craigie has only done a handful of Shakespeare plays. “I’ve not done as much Shakespeare as I’d like to have done,” she admits. “I’ve done Much Ado About Nothing, Measure for Measure, and The Merchant of Venice. In Ireland for ages we weren’t doing enough Shakespeare; it was always a big thing when eventually a Shakespeare production would come along. Funnily enough, just before Garry asked me to do this show I saw the TV documentary There Is Nothing Like A Dame which featured Judi Dench, Maggie Smith, Eileen Atkins, and Joan Plowright and it had a lot clips of them doing Shakespeare. As I was watching it I was thinking ‘I’d love to do Shakespeare again’; then, 10 days later, Garry called me and asked me to be in Richard III."

Craigie comes across as warm and vivacious, exuding an engaging enthusiasm for, and knowledge of, her craft. She was still a schoolgirl in Dublin when her drama teacher Nora Lever suggested she had what it takes to be an actor. Another pivotal early experience was seeing the Abbey Theatre’s landmark staging of Borstal Boy. “That was one of the most important productions I saw and it still is. It was a wonderful production. I was a young middle class girl and boys like those shown in the play, from a borstal, would have seemed frightening to me from the outside. I would have thought they were scary and bad people but the play did that classic thing of opening up my world, my empathy, my understanding; making me see they were there just because of circumstance and you could be that person or it could be your brother. I felt my world grow so much, it was that powerful. I didn’t articulate it but I just knew that if theatre could be like that I wanted to be part of it.”

'From the very beginning of the play she does not like Richard, her own son. Why that was? She loved her two other sons. It makes you wonder was Richard born bad, did he decide to be bad, did she just never love him, could she not bond with him?'

In preparing for Richard III, would Craigie do ancillary reading outside of the script? “I kept all my notes from the Shakespeare lectures I attended when I was in Trinity in the 1970s,” she replies. “I dug them out before doing this, and Professor Walton’s notes on Richard III were brilliant at setting the play in its historical context, and outlining what other critics thought of Richard, and the various relationships within the play. Over the years you also acquire information and facts, and I’ve read things by the likes of John Barton and Peter Hall about playing Shakespeare.

"Shakespeare himself tells you the clues of what to do, if you follow his language, because where the stresses are reveal what he thinks is important in the phrase you are saying. So there are loads of hints within the play as to how to do it. I was just re-reading Peter Hall about doing The Merchant of Venice with Dustin Hoffman and Hoffman was finding it very difficult at the beginning; he was trying to be naturalistic and was breaking up the language. Eventually with Peter’s direction he got into it, though he had to admit ‘You can’t improvise this shit!’” 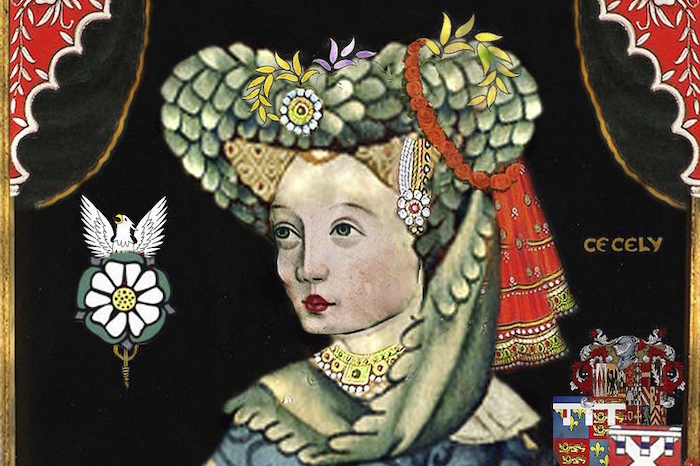 Craigie concludes by sharing her thoughts on the Duchess of York [pictured above]. “It’s fascinating; from the very beginning of the play she does not like Richard, her own son, and she warns people against him,” she observes. “She is afraid of his motives and psychologically you would wonder why that was? She loved her two other sons. It makes you wonder was Richard born bad, did he decide to be bad, did she just never love him, could she not bond with him? They have a bad relationship all the way through; right from the beginning he has an attitude to her and she has an attitude to him, and it becomes worse and worse as the play progresses, and his behaviour becomes more extreme. For a mother to feel ashamed of her son and ashamed to be his mother is a terrible thing."

Richard III runs at the Town Hall Theatre at 8pm from Wednesday September 26 to Saturday 29, with a matinee performance at 2pm on the Saturday. Preview performances are at 8pm on Saturday 22, Monday 24, and Tuesday 25. Tickets are from 091 - 569777 or www.tht.ie