TWO MEN, in worn out, dishevelled clothes and bowler hats, wait under a tree on the side of the road. They are waiting for a man called Godot. They don't know much about him, other than that he has a beard and perhaps the offer of some work, but will he ever come?

Waiting For Godot, Samuel Beckett's most famous play, a landmark in Irish and European theatre, and a high watermark of modernism and absurdism, will be performed by Druid Theatre Company as part of the Galway International Arts Festival.

The play will be directed by Garry Hynes and star Garrett Lombard, Aaron Monaghan, Rory Nolan, and Marty Rea. Indeed, it was the aforementioned actors who drove the company to revive the play.

"The cast initiated the project," Garry Hynes tells me during our Monday morning conversation. "Two years ago they said they'd like to do the play together, but at the time I thought 'We don't need yet another production of Godot!' and we were going to do DruidShakespeare, but when they asked me again, later on, I though it was a really good idea. I couldn't conceive of doing this without them, or casting this play and not cast them in it. The working relationship between us is the reason for this production."

Druid's relationship with Beckett is a long one. Act Without Words II was one of the first plays Druid performed in 1975. The following year, Garry directed Marie Mullen in Happy Days, while 1987 saw a production of Godot with Sean McGinley and Ray McBride. "Beckett has been part of my imaginative landscape all my life," says Garry.

The director, however, has no interest in simply reviving or updating the 1987 performance. For her, this new production is a new challenge, and she comes to the play with fresh eyes. "It's 30 years since that last production," she says. "What I'm involved in now is working on this play with the four actors I am working with. The only knowledge I ever have of a play is of doing it then and there."

'In the immense confusion one thing alone is clear...' 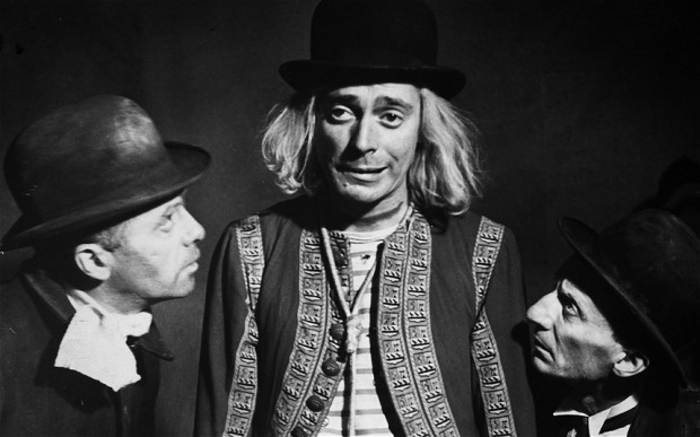 Waiting For Godot was originally written in French as En Attendant Godot, Beckett having emigrated to Paris in the 1930s. It was later translated by the author into English. "We always say he 'translated it back into English'," notes Garry, "but I think he wrote two Godots - one in French and the other in English, or rather Irish-English, his native tongue."

En Attendant Godot was first performed in 1952 in a shortened version, and broadcast on French radio. Its official stage debut came the following year in the Théâtre de Babylone, Paris - starring Pierre Latour, Lucien Raimbourg, Jean Martin (puctured above ) and Roger Blin, where it opned to positive reviews. The first English language production was in August 1955 at the Arts Theatre in London, directed by Peter Hall. Initially British critics were hostile, but after reviews by Kenneth Tynan and Harold Hobson, the play became a sensation. Waiting For Godot received its Irish debut in Dublin in October 1955.

"One of the things I wonder," muses Garry, "is, what must it have been like to see that play, for the very first time, in that first production?"

Godot was like nothing that had been seen before, and in post-war Europe its themes of uncertainty, frustration, exploitation, cruelty, devastation, but also humour and hope in the face of despair and overwhelming odds, captured the mood and imagination of the public. Its sparse dialogue - bar Lucky's speech - and its enigmatic nature has prompted acres of academic theories and interpretations as to its 'meaning'.

As Sir Peter Hall said during rehearsals for his 1955 production: "I haven't really the foggiest idea what some of it means…But if we stop and discuss every line we'll never open." Beckett though was contemptuous of the almost pathological analysis the play provoked, lamenting, "Why people have to complicate a thing so simple I can't make out." Garry is firmly on Beckett's side in this debate.

"We do look for meaning as the characters search for meaning," she says. "I know that Peter Hall quote. He was talking about when he was directing it for the first time, and I can understand why he says that, but it seems to be to be clear what Beckett is doing with Godot.

"On the face of it's quite realistic. Two men are waiting for somebody to come, who they don't quite know. To me, if Godot is to work, we have to be able to take it for what it is and to stop looking for some super-meaning. It's theatre - the characters make jokes at the expense of the audience. It's artificial, as all theatre is. That's the easiest way to have the experience of the play and to understand it. We're using the text as amended by Beckett for the German theatre in the 1970s. You need a guide and we follow his instructions. I think its real meaning is its performance." 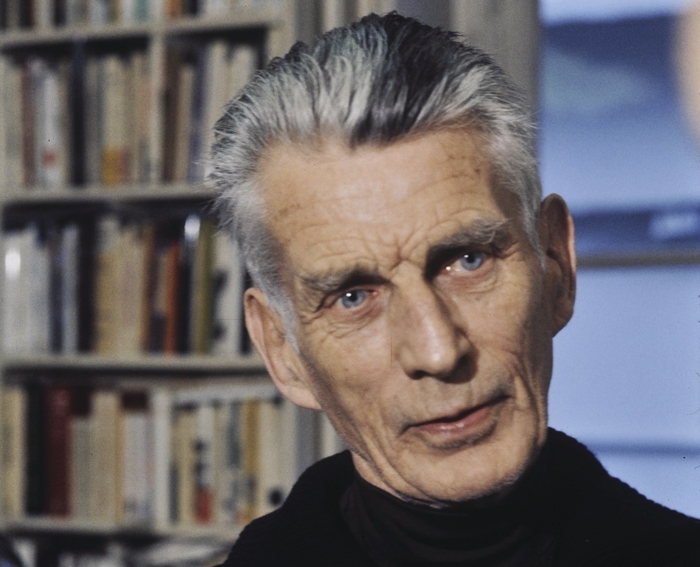 For all his modernism, his absorption of (and subsequent influence on ) European radical ideas on theatre and literature, Beckett remained very much an Irishman, and his work - in common with such diverse work in diverse genres by other Irish émigrés, be it Joyce's Ulysses or Van Morrison's Astral Weeks - is steeped in and profoundly influenced by thought of home.

"The play feels entirely Irish," declares Garry. "Vladimir and Estragon's speech and attitude is Irish, there's one point in the play where one of them says, 'Is that yer man?'. It feels entirely Irish to me. It feels like home. Places like the Dublin Mountains, Connemara, Wicklow, Mayo, this was a landscape Beckett was familiar with, it was part of his imagination. He uses that which he knows.

Further evidence of Beckett's concern to emphasise the Irishness of the play comes in Lucky's speech, where he twice mentions Connemara, and most fascinatingly, camogie, in a list of otherwise international sports. That speech is both brilliant and bizarre, a mix of philosophical rumination and rámeish. For Garry, it is possibly the high point of the play.

"It seems right where it is in the play, and it seems there is a basic sense to the speech," she says. "I think Lucky is the most whole, and human character in the play. In some ways he is a remnant of a thinking human being. He's like a piece of clockwork that's become broken. The speech has shards and remnants of life. He's this atomised human, thinking about religion and philosophy, but he finds it impossible to put something coherent together, he has difficulty getting it out, and that's an experience everybody has."

And despite its reputation for pessimism and bleakness, Waiting For Godot, is also extremely funny. "There is beautiful comedy of human relations in Waiting For Godot," says Garry. "Laurel and Hardy were an influence on Beckett, you can see that in the use of bowler hats. There is comedy in every single interaction. It's the way people laugh inappropriately at funeral or create black comic jokes. You're not doing Beckett right if you leave the humour out."

Waiting For Godot runs from July 7 to 23 (July 7-9 are previews, no show July 10 and 17 ) including 2pm matinees on Wednesday July 13 and Wednesday July 20 at the Mick Lally Theatre, Druid Lane. There will be a 'Backstage at the Festival' talk on July 15. Booking is through the GIAF box office, Galway Tourist Office, Forster Street, Mondays to Saturdays, 10am to 5pm (091 - 566577 ) or www.giaf.ie