DUBLIN THEATRE ensemble WillFredd have only been around for five years but in that time have earned a reputation as one of Ireland’s most imaginative and exciting young companies. Now it brings its acclaimed show, Care, to the Town Hall Theatre on Saturday May 6 at 8pm as part of the Galway Theatre Festival.

WillFredd Theatre was founded in 2011 by co-artistic directors Sophie Motley and Sarah Jane Shiels, and producer Kate Ferris. The company’s work engages with contemporary culture, actively inviting new audiences into the theatre. Through ethical encounters between artists and communities of place, space and interest, the company develop theatre which responds to and represents elements of these communities. All of their productions entail extensive research and development.

WillFredd have had four productions to date: Follow focused on experiences of the Irish deaf community; Farm was about rural life, Jockey was a dance theatre piece drawing on the world of horse racing; and Care, first staged in 2014, delves into the world of hospice workers.

Fusing movement, live music, and text, every word, sound and image in Care is drawn from daily hospice life. It is a show about the people who add life to days, if not days to life. The action unfolds in a typical hospice where staff work around the clock. They make tea. They give baths. They paint nails. They refill syringe drivers. They throw clay at walls with children. Some pray. Some do not. Everyone they care for is dying, the staff help make their final days bearable.

Among the cast of Care is County Galway native Marie Ruane who hails from Glantane, near Castleblakeney. At the end of a day’s rehearsal she took some time to talk with me about working with WillFredd and Care. She began by disclosing how she first got the theatre bug.

“I went to St Cuan’s College and the principal there was Eamonn O’Donoghue who also runs Stagewise in Meath, an amateur drama school for teenagers," she says. "I used to go to that in the summer. My mother also had quite an interest in amateur drama so she would have fostered my own interest, brought me to shows and so on. Eamonn was also our career guidance teacher and he led me to think I could possibly pursue as a career. He was also our career guidance teacher and he recommended me to do drama in Trinity.”

After completing a drama degree in Trinity, Marie went on to train at the prestigious London Academy of Music and Dramatic Art. Her stage credits include Dancing at Lughnasa and Macbeth with Second Age and Death of a Salesman at the Gate. Care is her third time working with WillFredd having previously featured in both Farm and their children’s show Bees.

“I first got to know Sophie and Sarah Jane in Trinity, they were the year behind me,” she says. “When I moved back to Ireland after being away for six years they’d just started up with Rough Magic’s mentoring SEEDS programme. I was really into their work, they would delve deep into the roots of whatever project they’d decide upon, in Farm they did a huge amount of work with Macra na Feirme researching rural life. It was good for me to do that project because I am from a farming area. Sophie wanted someone who understood rural life but also city life and where one meets the other so I fit the bill.”

'There is one point where I don a bear costume and play an Elvis number on the guitar!' 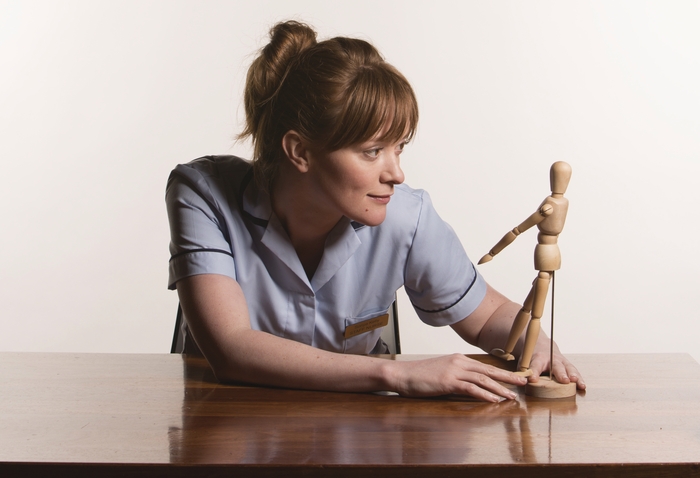 Marie goes on to talk about Care; “When I tell people I am doing a show about palliative care they say ‘Oh God, that must be tough’ but it’s actually quite a beautiful show. It’s all about what goes on in a hospice from the staff’s perspective. A lot of people wouldn’t really know what goes on if they’d had no contact with a hospice but for those people who have had contact it can be quite an emotional connection whereas we’re coming at it from a different angle, from the workers’ perspective. It shows how far staff will go in their work and it has light-hearted moments as well. I play a consultant for the majority of the play and there is one point where I don a bear costume and play an Elvis number on the guitar!”

A lot of research went into the creation of Care and Marie reveals that further research has accompanied this new run; “We did excerpts from the show last week for staff workers at hospices in Ennis, Galway, and Cork. Then we had a post-show chat in each place and got their feedback; that was brilliant, it was really informative. Sophie and Sarah Jane spent 14 months initially in St Francis’s Hospice in Raheny researching Care and much of the show is taken directly from transcripts of interviews they did with staff workers. For instance, the very last scene talks about what the nurse does when a patient passes away, and the script for that comes word-for-word from the description of a nurse in St Francis’s and his words are really beautiful and sensitive.”

Marie reveals she was particularly moved by the response of a hospice chaplain who was asked by one of the actors about how he dealt with patients of different faiths.

“He was a lovely, unassuming, man,” she recalls. “He said the biggest thing was to listen and that it was such a privilege for him to be there with a patient at that phase in their life and to journey with them. I thought that was incredible. I think most hospice workers feel like that. We’re just trying to show that in a way.”

“A hospice is an unusual topic for a theatre show but WillFredd are always about questioning what can be shown on a theatre stage,” she concludes. “People might feel tentative about going to a show that deals with hospice care especially if they have had a relative or friend going through it but this is not a depressing show, it has light hearted moments and it is quite beautiful in the way it portrays day to day life.”