JULY MAY well be festival time in Galway with all sorts of wonderful shows to look forward to, but June also has one great, unmissable treat in store; Decadent Theatre’s new production of Conor McPherson’s The Weir.

On its première at London’s Royal Court Theatre in 1997, The Weir won the Evening Standard, Critics’ Circle and Olivier awards for Best New Play, and immediately established McPherson’s eerie tale as a masterpiece of modern theatre; indeed Michael Billington, of The Guardian, recently included it in his list of the ‘101 Greatest Plays of All Time’.

The Weir unfolds on a stormy night in an isolated Leitrim pub as the local men are gathering for their evening pint. The arrival of a stranger in their midst – a beautiful woman called Valerie – spurs them to impress her with stories. These are stories of souls past, spirits present and spectres unforeseen. One story, however, is more chilling, more sinister and more real than any of them could have foreseen.

Decadent’s production, directed by Andrew Flynn, marks the first major Irish revival and national tour of The Weir and is undoubtedly one of the must-see theatrical events of the year. Flynn has assembled a superlative cast for the production including Frankie McCafferty, Gary Lydon, Patrick Ryan, Garret Keogh and, in the role of Valerie, Janet Moran. 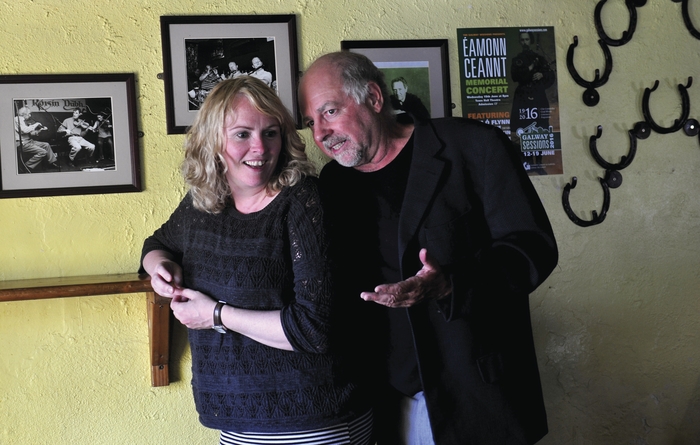 Galway audiences may have seen Moran just a couple of weeks ago when she impressed as Mrs Gogan in the Abbey’s high-profile touring production of The Plough and the Stars. “I was delighted to be in that show,” she says during a break in rehearsals with Decadent. “The Plough is such a classic, and to be in it during this centenary celebration of 1916, I felt very lucky.”

As a native Dubliner, Moran might be expected to have a ready affinity with O’Casey but her pedigree CV includes a raft of other classic and contemporary plays with many of our leading companies as well as TV roles in the likes of The Clinic, Love/Hate, and Quirke. I ask her when the acting bug first bit with her.

“I genuinely don’t think I ever wanted to do anything else,” she replies. “I was doing plays in school when I was really young and I just took to it and liked it and I was good at it and probably got a bit of praise for it. I wasn’t very good at sports or anything else so acting was always a thing in me, I always had an affinity with it.

"Then as I got older, after I left school, I worked backstage for a year with a few different companies at the Project. There I really got to see people working in a professional environment, and watching the actors work was when I fell in love with it. I thought what a great life it would be to spend your working hours in a room interrogating plays and working out how to perform them in front of an audience.”

For all her varied experience, remarkably The Weir is Moran’s first time to feature in a play of Conor McPherson’s; “I’ve wanted to do this play for a long, long time,” she enthuses. “Andrew contacted me during The Plough to see if I was available and I just jumped at the chance. I’ve worked with Andrew before, when we did Translations together eight years ago and I was delighted to get a chance to work with him again but particularly on something like this, it’s really up my street.”

How would Janet describe the character of Valerie and the way she fits into the play I enquire? “I don’t know how to answer that really,” she replies measuredly. “I don’t think the audience should really get a handle on Valerie until the end of the play. For most of the play she just responds and asks questions, probing, important questions that encourage the men to talk but she gives very little away. 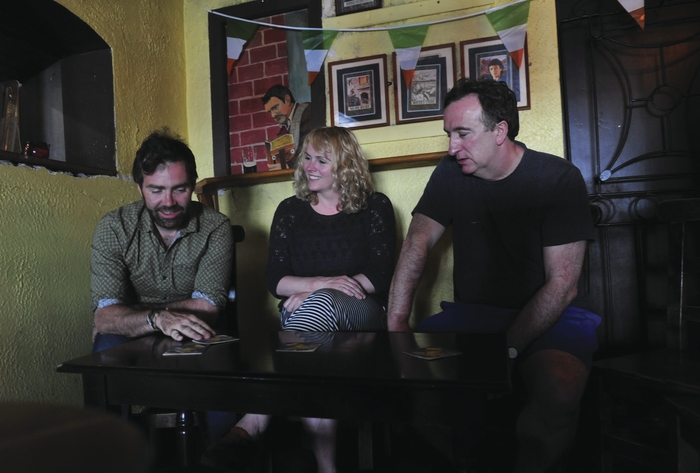 "I was talking to Petra, the costume designer, because I felt quite strongly that there should be no clues as to who Valerie is in her costume – you shouldn’t be able to say she’s got money or not for instance. When she does eventually talk about why she has come there a lot is revealed about her and she seems to be a person who probably thought her life was going one way and then something has thrown it off kilter.

"She proves herself to be very warm and compassionate in the way that she interacts with the men, but she is someone who is at an interesting point in her life because she has gone through something and is trying to find another way of being, which is what has brought her out to this pub in the middle of nowhere on that night.”

While the play ostensibly comprises ghost stories, the characters themselves are all inwardly haunted by different things that have happened in their lives.

“I think that’s absolutely true,” Moran agrees. “They start off like ghost stories, the first story is performed for the craic but then more and more progressively people start to expose themselves by what they say, until the very last speech by Jack, Gary Lydon’s character, where he talks about something very profound in his life and speaks with real honesty. The trajectory of the play’s stories build up toward that final story.”

Moran is clearly relishing getting stuck into The Weir rehearsals; “Very much so, it’s a lovely change of pace from Plough coming into a room where it is all about listening and talking to each other, interpreting the script and being as authentic as possible. It’s a lovely challenge right now and it’s a great cast obviously, and it’s great to be in a room with Andrew again.”