GIACOMO PUCCINI'S much-loved classic La Bohème comes to the Town Hall Theatre next week in a lively new staging from Opera Theatre Company. It promises a breathtaking experience for newcomers and opera fans alike, with ravishing music and thrilling arias and ensembles.

First performed in Turin in 1896, La Bohème portrays a group of bohemian friends living in the Latin Quarter of 19th-century Paris. However, this production, directed by Ben Barnes, and featuring a cast of Irish and international singers, moves the action to 1930. A chance encounter in a freezing garret results in a red-hot affair between penniless poet Rodolfo and innocent seamstress Mimi. Will their love be strong enough to survive against the odds? La Bohème traces their troubled romance in music of great melodic richness and dramatic impact.

Among the OTC cast is up-and-coming baritone Rory Musgrave who takes the role of Schaunard. Rory hails from Cleggan in Connemara and, ahead of La Bohème’s Galway performance, he talked to me about the production. Given Cleggan is not exactly renowned as a hotbed of operatic activity, I began by asking how he had found his way on this career path.

“It wasn’t a direct route, it started with music and singing in general,” Rory replies. “From a very young age I was always singing, you couldn’t stop me, I was practically singing before I was speaking. My parents saw I had musical talent and fostered it. I got involved in choirs and I’d get the occasional boy soprano solo, and so on. I made my way up through school always singing on the side and it progressed from there. As you grow up your taste develops, your voice develops, and opera became a natural fit for me.”

“I’ve been doing my musical apprenticeship, taking roles in the chorus, doing all the business in the background,” he states. “OTC have given me opportunities to step forward to smaller roles, and as understudy, and then principal roles which is really fantastic so I am cutting my teeth with the company.”

Music and singing ran in the Musgrave family he reveals: “My parents are farmers but were both musical. My mother is a very good singer; she was actually in the chorus of a production of Carmen years ago at the Royal Albert Hall. It was something she did for fun when she was young, then she went into veterinary and equine sciences and met my father who is a sheep-farmer. My dad, when he was a student, was a great guitar player and played in bands and was a fairly good singer himself –he was a seventies rocker! So there are different types of music in the family, not all classical by any means.”

Rory made his OTC role debut last year as Gil in Susanna’s Secret. 2015 also saw him perform in Salome (NI Opera ), Rigoletto (OTC ), and The Telephone by Menotti. In 2014, in addition to becoming an OTC Opera Hub artist, Rory was awarded the Arnhold Bursary in Wexford Festival Opera.

He has recently been made the co-recipient of the PWC/Wexford Festival Opera Emerging Artist Bursary with soprano Rachel Croash. He graduated from the Royal Irish Academy of Music with a master's in vocal performance in 2013 and is currently studying with Owen Gilhooly and Andrew Watts.

“I’ve been doing my musical apprenticeship, taking roles in the chorus, doing all the business in the background,” he states. “OTC have given me opportunities to step forward to smaller roles, and as understudy, and then principal roles which is really fantastic so I am cutting my teeth with the company.”

Rory offers his perspective on La Bohème and his character, Schaunard; “The key thing is the relationship between the four bohemian male friends. It’s about finding that balance and energy and fun between them. Schaunard is the musician and he is also the only one of them that probably earns money, the others don’t earn much. Martello is a painter, Rodolfo is a bit of a writer and works for a rag newspaper, and Collina is a philosopher and earns nothing I’m sure.

"Schaunard is a music teacher as well as being an instrumentalist and composer. He has a great joie-de-vivre, he’s very funny. He comes in and starts telling silly stories about having to kill parrots, etc, so he is a bit of a clown in the group, but he’s a clown with a heart. He enjoys laughter and likes to inject some mischief into proceedings but when the ending comes he feels it as keenly as everyone else.” 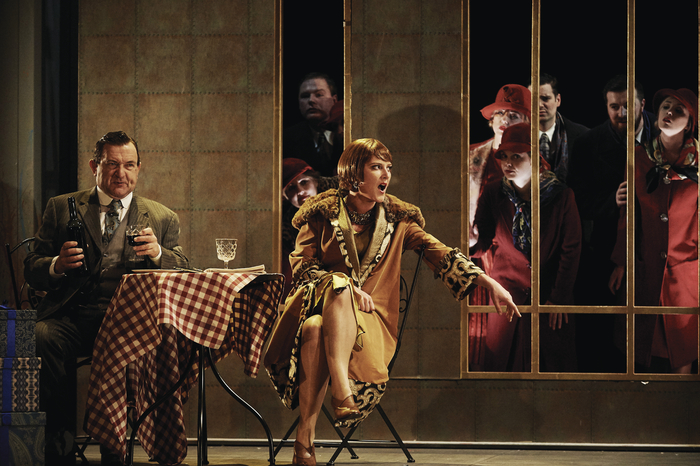 Whereas previous OTC operas have been sung in English, La Bohème is sung in Italian, with English surtitles. “I think it is a fantastic decision,” Rory declares. “It’s partly been done as an experiment to see how audiences will like it but there are also advantages to it. Singing in the original language has a very strong connection with the music whereas a translation will always fall a bit between getting the story right and matching what the music requires of it.

"If you are ever going to do it you should do it with an opera like La Bohème which is popular, has recognized music, and is not one of those operas that is so complicated that you practically need a novel to tell you what’s going on in the background. It’s a very straightforward plot that is easy to follow and people know it, so I think it is a fantastic departure from tradition for the company and so far it is working out very well.”

“We’re lucky to have a good combination of home-grown talent - Maire, Sinead, Padraic, myself, and the chorus are all Irish - and world class people from abroad,” Rory notes. “Charles Rice is from the UK and he has got a good international career going and Pablo is an Argentinian tenor and the most beautiful singer so it’s lovely to see Irish opera singers can hold their own and collaborate with renowned artists from around the world. It’s a musical treat, it really is.”