Throughout the six decades of his vibrant and varied artistic career, Brian Bourke has had an abiding love of theatre and actors. He has frequently drawn actors in the flow and moment of rehearsal or performance, and also made them the subject of considered portraits.

This rich strand of his work is the focus of a thrilling new exhibition, On The Boards, which opens tomorrow [Friday March 8] in the Town Hall Theatre bar at 5.30pm. The show mostly comprises drawings but also includes paintings, and features such figures as Marcel Marceau, Fionnuala Flanagan, and Mick Lally, scenes from plays by Beckett, and productions by Druid.

Brian’s long engagement with theatre began in earnest during his time as a young man in London during the 1950s, as he tells me over a coffee at the House Hotel, where he and his wife, artist Jay Murphy, meet me to talk about the upcoming show. “I didn’t go to much theatre in Dublin before going to London," he says. "I was only in my teens when I moved over there. I do remember going to some of the old music hall type shows in the Olympia with Noel Purcell, they were very funny. Then in London I saw the first production of Waiting For Godot and it was like nothing I had ever seen before and I loved it. 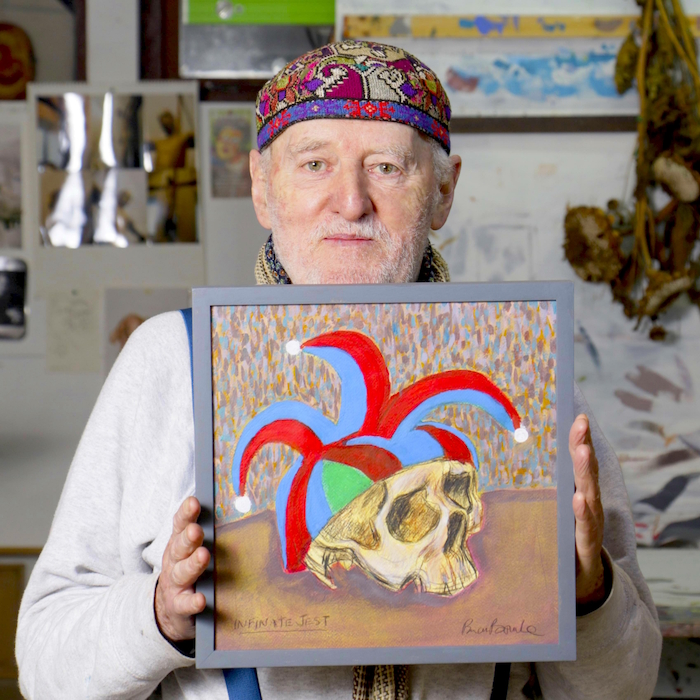 “In London I used to go around with one of those old fashioned ink pens with a nib screwed in to one end,” Brian says, evoking his days as a budding young artist. “I’d sharpen the other end and dip that in the ink as well and use either end to make a drawing. That was in the fifties and I would make drawings in cafes or all kinds of places around the city when lots of it was still bombed out from the Second World War.”

Another play that made a big impression on Brian in those years was John Arden’s Serjeant Musgrave’s Dance, “It beat most of the other plays of the time into the ground, it was a wonderful play and has gone on being wonderful,” he says admiringly. “John Osborne and the other ‘angry young men’ writers who were popular at that time came to look bourgeois in comparison to John Arden. They started off seeming to be protesting as part of the younger generation but in reality they were quite conservative beneath it all, whereas Arden was great, and that play has not been put on nearly as much as it should be. When I was living in Germany I did the set design for a university production of it there.” 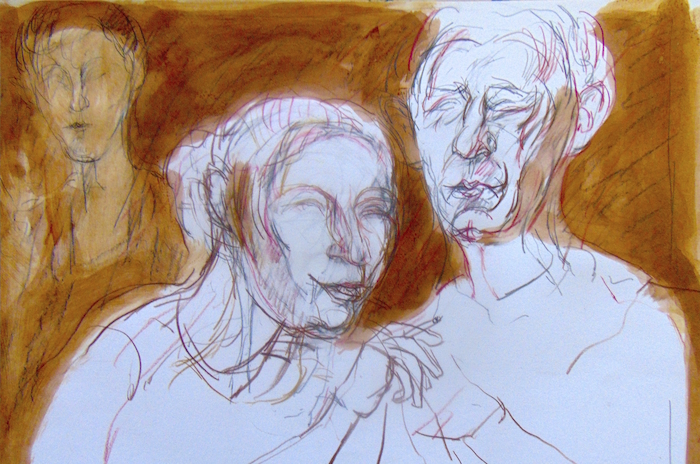 Although a keen theatre-goer in London, it was only when Brian returned to Ireland that he began drawing stage performers. “I started with drawing ballet dancers rehearsing and exercising,” he relates. “I’d also sit offstage when they were performing. I remember on one occasion I had set up a little easel and was working away in the wings during a performance and a dancer was standing beside me puffing on a cigarette and she suddenly said ‘will you hold this for me’ and handed me the fag then went onstage and capered about for a few minutes and came back and said ‘thanks’ and took back her cigarette.”

'If I am doing a portrait of somebody I don’t ask them to sit like an apple as Cezanne was accused of treating his models, I am happy to let them move'

The attraction and challenge of drawing dancers was in catching their movements on paper and the same held true of Brian’s sequence depicting mime great Marcel Marceau; “Drawing Marceau was a great set up for me,” he declares. “I had a good easel, and I could stand it offstage as he was performing and the thing about him is he did the exact same thing every night. It was all about movement as he shifted from one character to another but he’d be in the same garb for them all and move in exactly the same places on the stage so it was a doddle for me to draw. I’d lay out the drawings like ‘one, two, three’, and then just move from one to the other. 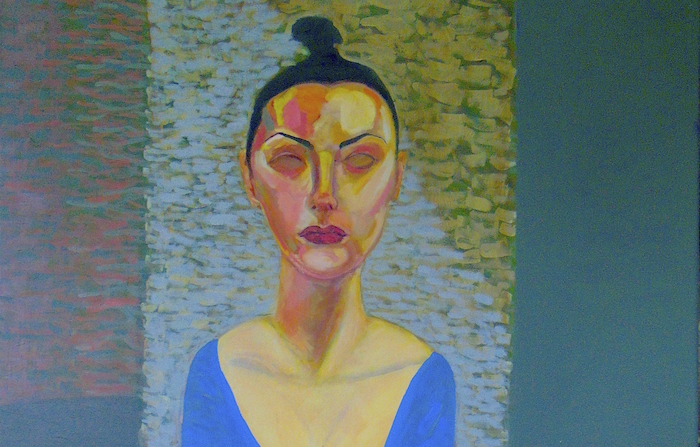 "I like to do that when I am drawing figures anyway; sometimes if I am teaching life drawing I will get two models and have them move around in a circle and the students in the class will say ‘stop’ every so often and the models will stop for 10 seconds. The moving element in drawing is something I have been doing from an early age.

"It is just drawing on the hop as things are moving around you and making as quick an observation as you can possibly do. If I am doing a portrait of somebody I don’t ask them to sit like an apple as Cezanne was accused of treating his models, I am happy to let them move. Every so often I will ask them to ‘look up there’ or whatever. I’ll normally do three or four studies at the same time while the model is there and if they are not moving I am moving.” 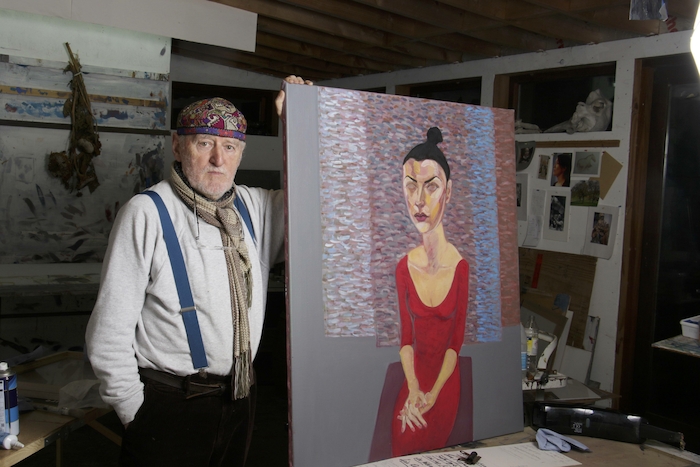 Brian’s return to Ireland also saw him get involved with Dublin’s pioneering Focus Theatre; “I did some work with the Focus during the 1960s when Deirdre O’Connell was its director,” he tells me. “They would use my drawings in their programmes and I did a portrait of Deirdre that was in their foyer for some time but all the heavy smokers at the time meant the painting was getting a patina from the nicotine so it was removed. Sabina Higgins, who had been a young actress as Sabina Coyne at the time, has that painting now in the Áras.”

I ask Brian if, when he is drawing actors in performance, he is aiming to catch the character they are playing or their own selves. “Funnily, when you are drawing an actor in the course of a play, they become the character as you are drawing them,” he replies. “Only recently I drew Tara Breathnach in her performance as Molly Bloom and the drawing doesn’t look a bit like Tara because I was drawing her version of Molly; she had become that character. Though I have done portraits of her also where she does look like herself. Both of those series are in the exhibition. There is also a big oil painting triptych of actor Emma Eliza Regan but I did not do any works of her on the stage which would have been different.” 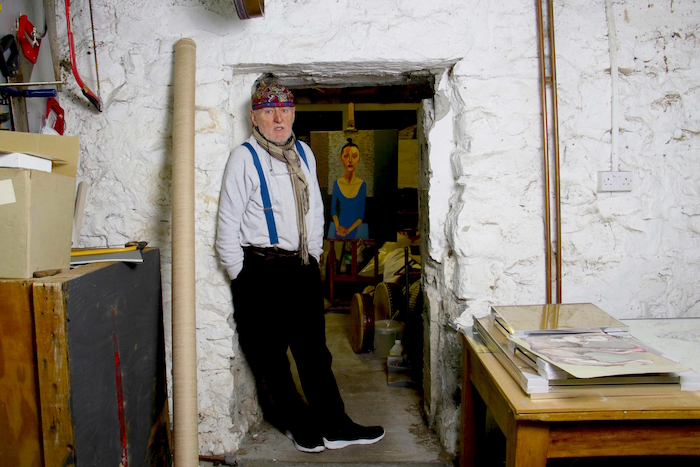 Given Brian’s love of Beckett, it’s no surprise that On The Boards features a range of Beckett-inspired works, including performances from Druid, actors David Kelly and Fionnula Flanagan, and even Godot’s Didi and Gogo transposed to the Bible’s crucifixion scene. “I did Godot drawings in Druid when they did the play and I remember playing Pozzo in a production of it in Germany,” he states. “As for the crucifixion piece, Godot starts with Didi and Gogo talking about the two thieves crucified with Jesus, whose names were Dismas and Gestas, so I did a couple of large paintings of two figures on the cross and Didi and Gogo looking at them. The Fionnuala Flanagan piece is from her doing Happy Days in the Beckett Festival at the Gate in 1991. The opportunity of sitting quietly while she was working away over a few days let me get dug in, so that triptych was not made so much ‘on the hop’ as some of the other pieces.”

On The Boards continues at the Town Hall for the next four weeks, with the artworks being displayed both in the foyer and the bar. Curated by Margaret Nolan, it is a terrific show perfectly suited to its location and is well worth a visit. The exhibition will be officially launched by actor Tara Breathnach.