Last Friday evening, The King’s Head hosted the launch of Bádórí an Cladaigh’s 2019 calendar, a lavishly illustrated production that, with its wonderful photographs of Galway hookers, would grace any wall.

Once there were 240 Hookers sailing out of the Claddagh, but the boat has almost become extinct in local waters. The calendar, however, is a striking visual reminder of the terrific work that has been carried out by the Bádórí an Cladaigh/Claddagh Boatmen over the last decade in both restoring and building anew the city’s hooker fleet, and reviving this talisman of Galway tradition. Over a Monday afternoon coffee, bádórí secretary Peter Connolly talked with me about the group’s achievements to date and plans for the future.

Peter grew up in Shantalla but the genes of the Claddagh and its boats are deeply imprinted on him. “Though we were reared in Shantalla it was not unusual to walk out the door in the morning and see a 23 foot gleoiteog with its head sticking out of the driveway," he says. "Boats didn’t leave us just because we left Claddagh.”

Peter's father was Coleman Connolly, who grew up in Claddagh, and "was very much into boat building, as were his brothers Michael, and Martin, an ex-mayor of Galway. “When we were kids," Peter says, "my father used to always talk about the boats of Claddagh. He started making modern sailboats, which was unusual for someone from Claddagh, but when he retired he got back into traditional boats and he restored The Fiona and also The Claddagh Lass, which his uncle owned." 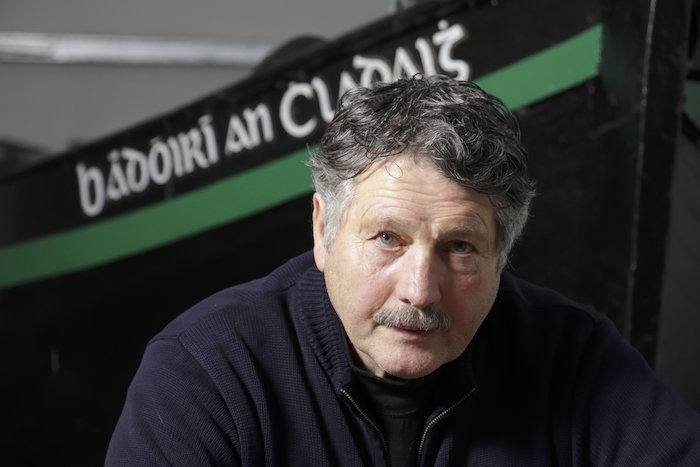 Peter recounts the beginnings of Bádórí an Cladaigh. "The society was formed in 1996," he says, "initially as just a group of people who got together to do some sailing. When I joined in 2008 they were just about to buy the gleoiteog now named Bádórí an Cladaigh to renovate it. We hired boat builder Joe Joyce and he gave us technical advice and did much of the work on it. He is still our boat builder in residence; he has led the team since the inception of the project and continues to produce wonderful craft.

“That first renovation gave us impetus to move on. We decided to take on the role of building a new boat; the 32 foot Croí an Cladaigh. FAS, now SOLAS, enabled us to set up a Community Employment Scheme for people to work on the build, on condition that we put the boats into trusteeship and that they’d never be sold or used for private gain. So we set up an independent trusteeship to do that. We started Croí an Cladaigh in 2009, it was completed in 2012 and launched that year at the Volvo Ocean Race stopover. It’s the first boat in its class built in Galway since 1922. It was a wonderful start to the rebuilding of the fleet and we have continued from there.”

Today, the group has trusteeship of a fleet of seven boats and when they set forth on the waters it is always a captivating sight. “We try to sail up the Claddagh stream as often as we can over the summer, though with tides and winds it is a difficult area to sail,” Peter explains. “We had three boats at Long Walk on Culture Night. It is like being on a catwalk going up there with the hookers because all you see is the flash of cameras, especially when it is getting dark. They provide great colour and pageantry.” 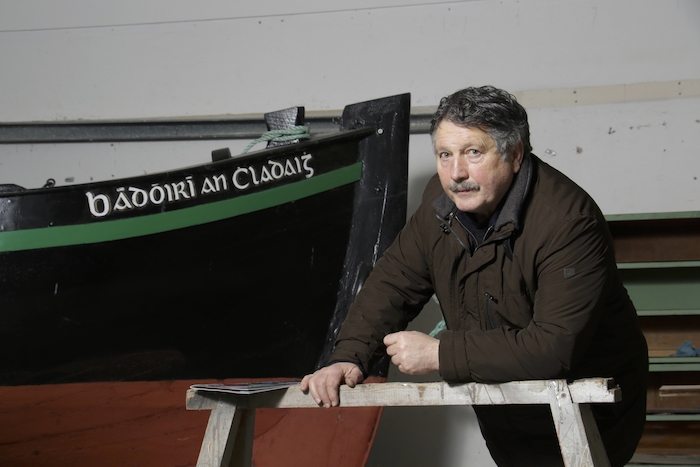 Bádóirí an Chladaigh is also dedicated to training young people in traditional boat-building and sailing skills. “Coley Hernan is our director of sailing and a great teacher,” Peter observes. "We have a holistic approach to creating a viable fleet that is maintained for the next generation. You’ve got the project leadership, the boat building, the maintenance, and the training of young people to sail them and that connection is taken up now with the Galway City Sailing School, the Port of Galway Sea Scouts, so we have a new raft of young people coming up who will be able to take over that mantle.”

The project has also re-established the historical maritime links between the coastal communities of Galway Bay and its islands. “Since Croí an Cladaigh came on the scene we’ve been at all the boat festivals in the last six years,” Peter notes. “In 2018 it won the league in its category. However, it’s not about the winning but taking part and getting to know the harbours along the coast and the geography, and the locals and the other boats. What has been missing is the connection between Galway and Connemara over the past years and we have re-ignited that and it is a wonderful learning experience for anyone on the boat.”

Peter highlights the challenges entailed in protecting and maintaining the boats. “There are two tides per day and you’re trying to moor boats in the Claddagh and it is difficult when they are down on the ground and bumping off it at low tide," he says. "Then add inclement weather to that. The abuse on a timber boat is colossal. So we take the boats up, we maintain them, paint them repair them and keep the fleet maintained. When there is a storm we could be out at 3am moving boats. The night of Storm Ophelia we nearly lost two of them, we had to stay in three feet of water holding them away from the dock wall.” 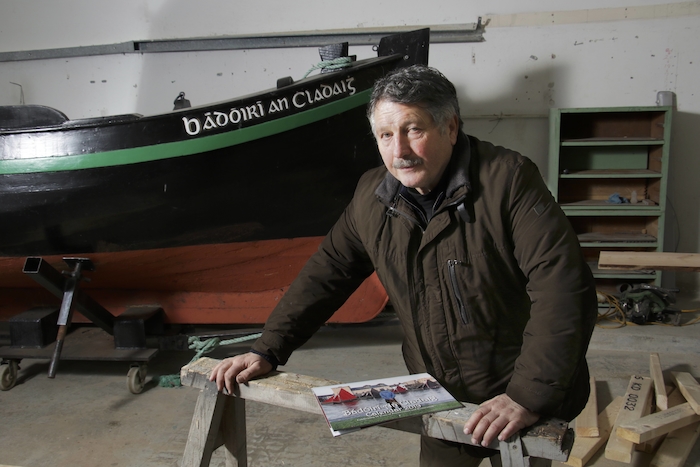 Bádórí an Cladaigh has also built up exciting overseas links; “We have a growing international connection,” Peter confirms. “Tony Walsh did a film about the making of Croí an Cladaigh called From The Woods To The Water. It was seen by the Irish community in Hong Kong and they invited three of us out there for nine days. It was a wonderful connection, we met with some Chinese junk boat builders and we’ve been talking of an exchange where they would build a junk here and we’d do a hooker there. They’ve invited us back and we want to take three gleoiteogs to Hong Kong for St Patrick’s Day. There are also talks underway about a visit to Toronto and sailing three hookers to Lough Gill in Sligo. All these would be huge promotions for Galway.”

For the past year Bádóirí an Chladaigh have been settled in to their new home at the Glass Factory (Galway Irish Crystal ) on the Old Dublin Road. Bádóirí is working with The Ignition Group (the team behind The Glass Factory project ) to develop an interactive visitor experience, as well as utilising the space for the new workshop. The visitor experience at The Glass Factory will also enable Bádóirí an Chladaigh and The Ignition Group to develop the project further, with regular sailing excursions on Galway Bay. 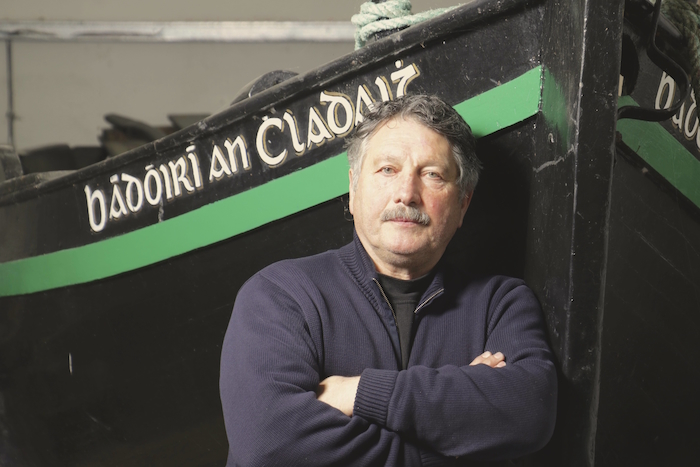 This small community group has accomplished much, and Peter acknowledges the generous support of both the Galway City Council and many local businesses for their endeavours. By 2020, the bádóirí will also be fully licensed to carry passengers on the boats for pleasure trips onto the bay.

Peter reveals that a special 2020 flotilla is another dearly held idea. “We have the concept of having 14 boats representing each of the tribes for an event in summer 2020 which would be a visual extravaganza," he says, "each boat would represent a family and have their logo on the boat. It is now close to becoming a reality with boats from Kinvara, Oranmore and Spiddal, all committed to support this endeavour thus meeting the target of 14. Seems like it’s full sail ahead for Bádórí an Cladaigh."