Far Cry 3 is a game about a guy called Jason who abandons his friends, carves bullets out of his arm with a stick and gets superpowers from tattoos. My favourite part about that sentence was that it was mostly true. The only part that wasn’t mostly true was the superpowers stuff but it's close.

But really Far Cry 3 is an open world game where you, Jason, were on vacation with your friends and brother and get kidnapped by pirates. The island you are on is a lush green jungle island filled with mountains and beaches. The massive contrast between the jungle and the story is really what makes this game interesting. The environment is inviting and beautiful but the story and characters are normally hash, depressing, overly aggressive, over the top, eerily happy and downright insane. 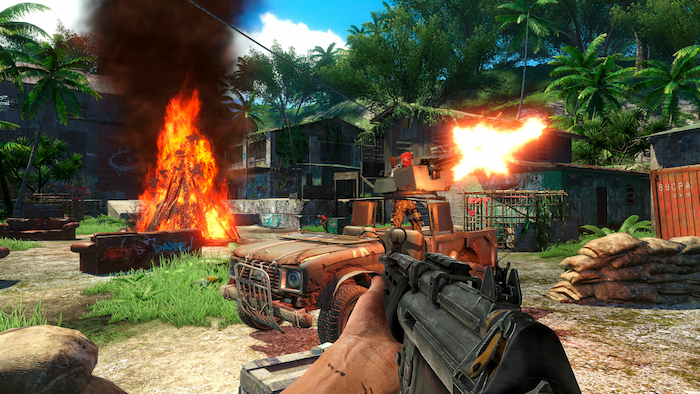 The conflict and change in your character throughout the story is what really interested me about this game the first time I played it. The first time you kill a character in the story your character freaks out, he nearly passes out because of it but as you progress more into the story he directly tells a character that every time he kills someone he feels he’s alive again. This is very clear in the final third of the story when he travels to a different island just to kill one person even though the “main” bad guy is dead.

The “main” bad guy is Vaas. He is the most interesting character probably in any game ever. You never have power over him until you kill him. The game does a fantastic job of building him up as the biggest badass, he is always in your face. He is the one who I described as insane, over the top and eerily happy at times. If you have never heard of this guy before what are you doing with your life? Do yourself a favour and look at this clip.

The level up system in this game is fantastic. Granted some of the level up’s aren’t worth it but the way the levels are shown is phenomenal. As I mentioned the tattoo’s giving you superpowers and I kind of lied. It’s the superpowers that give you tattoo’s (kind of still ). Every time you level up you are given a new part of a tattoo that shows up on your arm and is easily tracked. The reason I love this system is the tattoo’s don’t only show how far you’ve gone in levels but also in the story.

The gameplay is mostly based around stealth even though the gunplay is smooth and fun. The reason it is based around stealth is because many of your levels go into stealth and every time I play this game it is the tree I follow the most. The collectables unlock better unique guns after certain thresholds. Also unlocking the towers lets you buy guns in the shop for free. The crafting in this game isn’t much to shout about but it’s alright very standard stuff. As I hopefully have made clear is that this game is about characters and good ones as well and I don’t want to spoil anything because I have left out one of my favourite characters. If you are looking for an older open world game with rich environments and absolutely incredible characters this is a game for you. I would have to give this game a 4/5. I would give it a 5/5 if the final third of this game was just a small bit stronger. This is the perfect game to pick up on the dawn of the new Far Cry: New Dawn… get that one too.

Just one final side note: DO NOT TOUCH THE ONLINE!