THE BEST science fiction, in whatever form it takes, is often less a prediction of the future, than a reflection on contemporary concerns, anxieties, and sometimes hopes. The best sci-fi is always very aware of the moment in which it exists, and few games know their moment better than Horizon: Zero Dawn.

Militarism, capitalism, and a cavalier attitude to the environment by privileged white men results in a global catastrophe leading to the extinction of life on earth...except one woman, Elisabet Sobeck, has a plan, and her genius will one day see life begin on Earth again. Centuries later, nature is lush, abundant, and flourishing, and humanity is back, their civilisations at different stages of evolution.

Yet, the legacy of humanity's original destruction - self replicating war machines which consume biomatter, thereby stripping the planet of its resources - lie only under the surface, waiting to be called back into life. A group of ambitious, violent, power-hungry men want to re-awake these machines. Humanity is under threat once again, and it's up to a teenage girl - a hunter, warrior, and adventurer called Aloy - to rise and be the heroine the word needs.

Is Horizon: Zero Dawn the closest thing we have yet seen to a feminist game? Aloy - independent, intelligent, forceful, fearsome, fearless, and unusually in games, largely non-sexualised (the midriff bearing Carja Blazon outfit being the only faux-pas in this regard ) - is one of the most compelling and satisfying characters in contemporary gaming. Arguably she should become an icon who surpasses Tomb Raider's Lara Croft and rivals such as Ezio Auditore from Assassin's Creed. 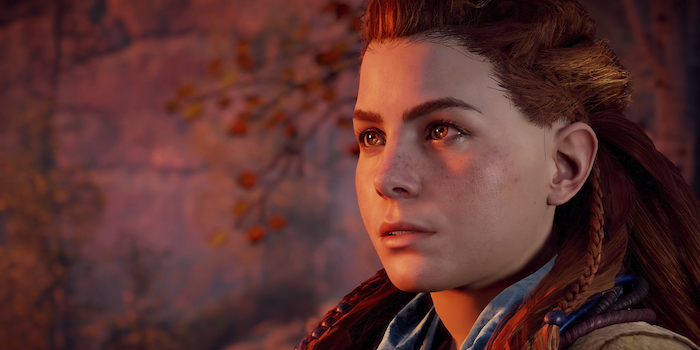 Rightly acclaimed upon its release in March 2017, it is satisfying to report that Horizon: Zero Dawn remains an outstanding game. Its voice acting and narrative strength is at a level close to the gold standard set by The Last Of Us. Its open world is richly detailed, a pleasure to explore in its own right. Players will also lose themselves in experiencing the new tribes and nations that develop post-apocalypse, the entire game's mythology being an absorbing experience. The game's approach to gender, gender roles, and sexual politics is welcome, refreshing, and one of its great achievements, criticism of cultural appropriation of Native Americans is justified and needs to be acknowledged. Perhaps it's all the more glaring in a game which otherwise gets so much right.

So what about gameplay? Horizon offers an array of weapons, and an even greater array of ammunition, with which to defeat the dinosaur and animal like machines which menacingly stalk the earth. The enemy AI of the machines is good, and any encounter, no matter how small, will see gamers facing a good challenge - and when facing the Death Bringers (and in The Frozen Wilds add-on the Scorchers and Fire Claws ), a substantial challenge. 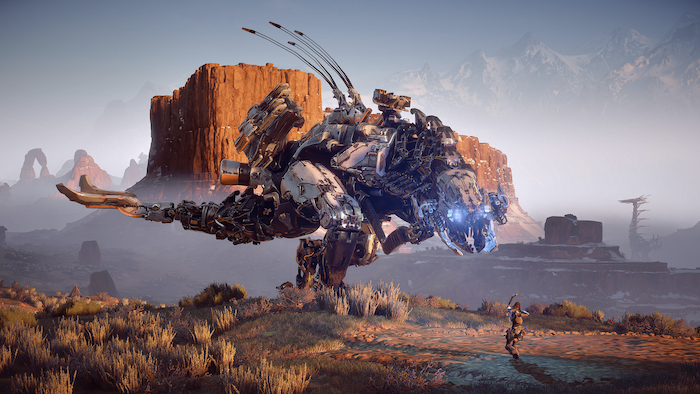 Part of the pleasure of the game is learning, adapting, and developing combat styles. Horizon: Zero Dawn is a game which rewards stealth and strategy. Guerilla tactics are key. Hit and run tactics, a combination of different types of weaponry and ammunition depending on the enemy, and above all using the terrain to your advantage, and against that of the machines - scoping out the battleground is essential to victory - allows for strategic fighting, and the fighting can often intense and you need to keep Aloy nimble.

In most games, the difficulty level you choose determines the level of resources available to your character. In Horizon: Zero Dawn though, the level or resources that can be found remains the same, regardless of level, but the rate you go through them differs considerably. At 'Normal' level I found I ran out of metal canisters most. At the 'Hard' level, Echo Shells and Blaze Canisters were constantly running out. This has an impact, requiring the player to think carefully about what ammunition to use, and how to be both effective and resourceful with it - a challenge in itself. A game in which there is so much to explore, and so much to do, it's a world you will not mind spending a long time in, and a fight-strewn adventure you will be happy to stretch out for as long as possible.

CeX trade in all types of entertainment tech. Our customers can trade in their stuff for instant cash or for vouchers that can be put towards that they do want (upgrades, etc ). Throughout the 2nd half of October and all of November we will be running a national promotion where one CeX customer will win €10,000 and 7 weekly winners will win €250 simply by trading in at our stores - the winner could be someone who trades in at CeX Galway!