THE FULL programme for this year’s Galway Film Fleadh is unveiled this evening, Thursday June 28, at the Galmont Hotel and, under the stewardship of new programmer William Fitzgerald, it features more films than ever before with a host of exciting premieres and guests.

The fleadh runs from July 10 to 15 and includes screenings in the Pálás cinema as well as the Town Hall Theatre. William’s appointment as fleadh programmer comes after eight years in various roles in the festival, including as short film programmer and festival publicist. Ahead of the programme launch he sat down with me to preview the cinematic treats in store, and began by reflecting on what it is has made the fleadh such a big success as it prepares to mark its 30th year.

“The biggest thing the Fleadh has going for it is Galway,” William declares. “The festival is reflective of the city that way. What differentiates it from bigger marketplace festivals like Cannes and Berlin is its laid-back atmosphere and egalitarian nature; there is no separation of artists and audiences, there are no red carpets or velvet ropes. Because it’s in Galway we have a ready-made terrific atmosphere that our international guests really respond to.

"The other big thing we have going for us is we have a marketplace; the whole industry side of the fleadh makes it unique in Ireland. So if you don’t get that film deal you were hoping for in Cannes in May, you can come to Galway in July and meet those same financiers or distributors and sales agents, and do business here at the same time as enjoying this great festival where the locals come to see what is new in Irish and world cinema.” 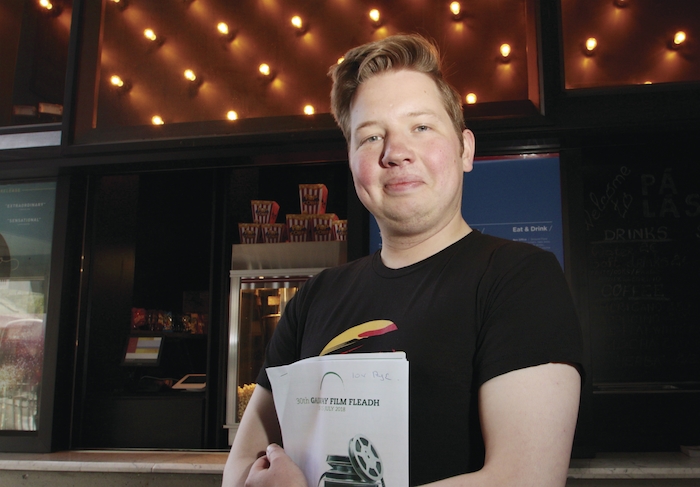 I ask William how this year’s line up reflects his own personal touch? “You’ll see some of my own individual flourishes on the programme,” he replies. “One thing we’ve done this year is implement a late night programming strand - What the Fleadh?! is a strand of independent horror, sci-fi, thrillers, and action movies. If you are the kind of person who enjoys staying up late and watching cult movies, the fleadh now has a programming strand catering to that and that’s a fun thing I was looking forward to doing.

"Among other things that are different I have tried to strengthen our ‘Out On Film’ LGBT film strand so we have a few extra titles in that this year. Apart from the programming side of things there’ll be changes like us moving into the Pálás where we’ll have all three screens as well as continuing to show movies in the Town Hall.

'Cellar Door, the first feature from Viko Nicki who won our documentary award in 2013 for Coming Home. It will have special resonance for Galway audiences as it touches on mother and baby homes and the Magdalen laundries'

"There is going to be 25 per cent more films in this year’s programme; there will be 107 feature films this year altogether and more than 150 shorts. There will be more panel discussions as well. This year is also the first time we have opened up the short programme to international shorts. Everything’s bigger and more spread out, you’ll see more of a visible presence around the city.”

William goes on to pick out some of the cinematic delights audiences can look forward to come July. “We have 25 Irish feature films and 16 of those are world premieres. Irish cinema is the Fleadh’s identity internationally and this year is a whopper of a year for that. We have Cellar Door, the first feature from Viko Nicki who won our documentary award in 2013 for Coming Home. It will have special resonance for Galway audiences as it touches on mother and baby homes and the Magdalen laundries. I think it will be a cathartic experience for audiences here. It has a really bold vision and he has a unique directorial voice.

"We have a terrific film from Northern Ireland called The Dig by brothers Brian and Andy Tohill. It’s a minimalist piece with just four actors and set in a bog. It has a European arthouse feel mixed with a thriller, but with this bare setting they have crafted this terrific intense drama, it is like a master-class of how to make an independent film.

"We have a number of films from Galway as well in the ‘Galway On Film’ strand and there is some great stuff in that, including the world premiere of Keith Walsh’s documentary When All Is Ruin Once Again. It is a series of intimate interviews with members of the community on the south Galway/Clare border. It looks at how their lives have been changed through the recession and the years of austerity that followed, how the world is picking up pace and moving along and leaving some of these people behind. It’s beautifully shot. Then we have an epic like our closing film Black 47, the Famine set thriller which was largely shot in Connemara.”

A hugely popular feature of the fleadh is the talks and panel discussions featuring leading film makers and actors and this year’s festival has another strong line up for this strand. “We have a diverse mix of guests,” Will states. “The chats and panels will fall along two lines, there will be events for accredited film industry professionals and then there will be talks that are open to the public."

Notable among the documentaries is David Wilkinson's Brexit documentary Postcards From The 48%. "Its title refers to the 48 per cent of British people who voted to stay in the EU and how the Brexit vote is affecting their lives," says William. "It has a Galway link too because David first got the idea for the film when he was attending last year’s fleadh, and part of it was shot here.

"There’ll also be a discussion on gender quotas in film and television and whether they are a viable way of promoting women’s work in the medium. There will be guests giving public interviews including Oscar-winner Marisa Tomei who is coming here for the premiere of her new film Behold My Heart. Also coming is Melissa George who audiences may recall as Angel in Home and Away. She stars in a new Irish film by David Gleeson called Don’t Go which was shot in Spiddal. The great English actress Vanessa Redgrave is another honoured guest at this year’s festival.”

In short, the 2018 Galway Film Fleadh is bulging at the seams with cinematic gems of all shapes, sizes and styles. Full details of the line up are on www.galwayfilmfleadh.com