SET DURING Easter Week 1916, Maloney’s Dream, the exciting new show for children from Galway-based theatre company Branar Téatar Do Pháistí, receives its world premiere at the Town Hall Theatre, with performances from Wednesday April 6 to Saturday 9.

Maloney’s Dream/Brionglóid Maloney is an action-packed, bi-lingual show full of live music, physical theatre, and puppetry. Created specifically for young audiences aged 8+, this is a captivating story of how one man’s dream collided with the birth of a nation. Thaddeus Maloney returns home to Ireland to realise his dream of opening a new hotel on Sackville Street (now O’Connell Street ). However, the events of that week impact his plans.

Using diary entries and recorded personal accounts, Maloney’s Dream explores the impact the 1916 Rising had on the lives of ordinary people and aims to bring their truly human stories to the foreground.

“In Maloney’s Dream we explore what life was like for the ordinary people in Dublin during what we now know was an extraordinary period in Ireland’s history,” Branar director Marc MacLochlainn tells me as he discusses the show. “I always had my eye on the 1916 centenary and wanted to find a way to tell a really complex story as simply as possible and make it accessible for children.

"I wanted to use the idea of a hotel, for me it initially started out that the hotel would be a metaphor for Ireland. That morphed into becoming more interesting to talk about Maloney, the man whose idea it is to set up the hotel. What became clearer to me as we were working on the production and doing our research was the story of this dream that was behind the revolution and the ideals that were in the revolution of what Ireland could have been.

"We used Maloney as the dreamer and he dreams of what his hotel could ultimately be, he has spent ten years abroad and has learned all this information and why he wants to bring it back to Dublin. The character of Maloney evolved out of the research and out of that metaphor, it became more interesting to follow him than to follow the hotel.”

Marc expands on the character and context of Maloney and his dream; “Prior to 1916 there was a renewal of interest in what it was to be Irish. People began to think of themselves as not subject to the Crown but uniquely Irish, you had movements like the GAA, the Gaelic League, the Abbey, there was the revival in Celtic literature. It was a time of idealists and of dreamers and there was that spirit of reconnecting with who or what it was to be Irish. I wanted Maloney to be one of those dreamers. He became a really interesting character for us. 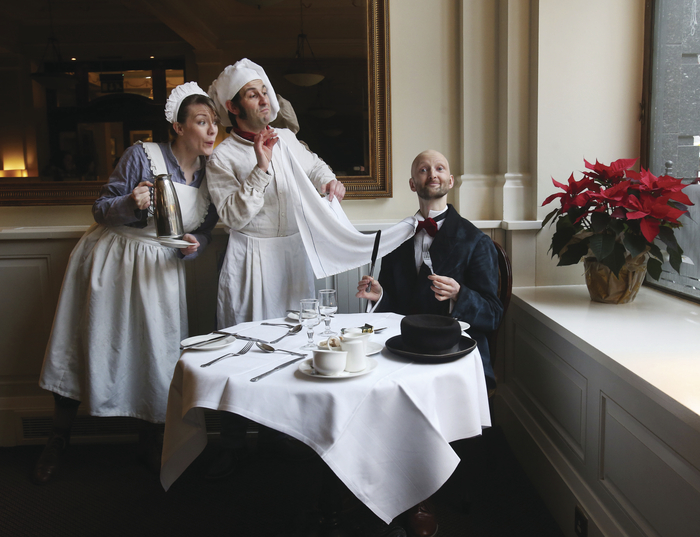 "He decides to open his hotel on Easter Monday and as the week unfolds, it becomes increasingly unsafe but Maloney is unwilling to give up his dream and the staff need to make him leave the hotel. It eventually crumbles around him but he doesn’t leave it there, he comes back to the burnt out ruins and finds a simple silver fork and decides that he is going to start again from that and that is the note we finish on, so there is that note of hope.”

Maloney’s Dream features a live score composed by Michael Chang and Marc is quick to compliment his input to the show: “Michael composed the music for our previous shows, Clann Lir and Twas the Night Before Christmas. The way he works is like the way we as a company make work in that it’s collaborative. Michael will go away and come in with an idea and because all of the performers play music and will be playing in the show Michael writes individual parts for everybody and the music is another voice in the piece. It adds atmosphere and can add layers of hope or despair to the story, it is what helps us find those levels. Michael is amazing at writing a score that is not over-powering and that just blends in and the music becomes part of the ensemble.”

Marc emphasises the ensemble nature of the work that has gone into the production from a fine cast featuring Chang, Zita Monahan, Grace Kiely, Helen Gregg, Miquel Barceló, Jonathan Gunning, and Seán T Ó Meallaigh with set design by Maeve Clancy and puppets by Suse Reibisch.

“We started working on this as a group, the whole cast and design team, in April 2015," says Marc. "It has been a full year of collaborative work and that gives us a real richness to the material that we come up with. It’s a fantastic benefit for me to have such a talented ensemble that just keep coming up with ideas and are able to execute them. It’s a fantastic ensemble and that’s what really interests me, the idea of an ensemble. Everybody bar Zita has performed with Branar before so we all have a good idea of how each other works.”

Alongside the play itself, Maloney’s Dream also boasts a terrific interactive website features videos, images and resources, including letters written at the time. It also provides young audiences, teachers and schools with a pre and post-show engagement, which includes downloadable activities, lesson plans, and information that brings the period to life for children.

The website, www.maloneysdream.ie, has been identified as being of significant importance by Trinity College Dublin and will be archived as part of a 1916 web-archiving project that identifies, collects and preserves websites that can contribute to an understanding of the causes, course, and consequences of the Easter Rising. The web-archiving project is being carried out by Trinity College Dublin, in collaboration with the Bodleian Library, Oxford and the British Library and will ensure the site’s preservation and ongoing public availability.

“I knew I needed to research the show as much as I could so I accumulated a lot of information,” Marc explains. “As we were using it in rehearsal I thought ‘a lot of this is valuable’. I’d been talking to teachers who were finding it hard to negotiate their way around all the information around 1916. We came upon the idea of creating a website which launched in September when the kids came back to school and every month it would be updated with info that was relevant to that month from 100 years ago. It has had phenomenal pick-up, I think mainly because it is interactive. Dave Clancy who has done a lot of work with us in design helped do the illustrations and the website is a way for the children to access the information in a way that is interesting to them.”

Maloney’s Dream is open to the general public and to schools. School performances are aimed at second to sixth classes at primary level. The aim is that pupils and teachers engage creatively with the period both before and after seeing the show. The play will undertake an 11-venue nationwide tour after its Galway run.