Eamon Morrissey, one of our best loved actors, comes to the Town Hall Theatre next week with his latest, much acclaimed, one-man show, Maeve’s House, inspired by the writings of the brilliant short story writer Maeve Brennan.

Although she lived in New York, many of her finest stories are set in 48 Cherryfield Avenue, Ranelagh, Dublin, where she grew up. By coincidence Morrissey was brought up in the same house. Both beautiful and poignant, Maeve’s House features extracts from Brennan’s writing and presents a moving portrait of two artists in conversation across generations.

An only child, Morrissey was born in January 1943. His parents, especially his mother, Maeve, encouraged his early interest in performance and he won several medals at feiseanna (including once finishing runner-up in a contest to a young Brenda Fricker ). His father Paddy was a minor civil servant and a veteran of the 1916 Rising.

“He fought in the South Dublin Union,” Morrissey reveals. “He was wounded and arrested then managed to escape from hospital. He was active throughout the War of Independence and in the Civil War on the Republican side. He was a de Valera disciple. That’s where he got the connection with Robert Brennan, Maeve’s father. They were close right through the whole movement.”

Morrissey left school before completing his Leaving Cert in order to pursue his interest in acting. “I don’t think my parents expected me to say at the age of 17 that I wanted to be an actor,” he recalls. “Acting was considered very bohemian, it was outside respectable society, but in fairness to them they didn’t raise huge objections, their attitude was ‘If that’s what you want, do it.’ My mother was a very open-minded woman, more so than my father. For example for my 17th birthday she gave me a copy of Ulysses.”

Eamon alternated between Dublin and London picking up whatever theatre work he could, before getting his big break in 1964 when he was cast in the premiere production of Brian Friel's Philadelphia, Here I Come!

“I was going backwards and forwards and I was largely doing stage managing work,” Morrissey says. “I was the worst stage manager ever. It was a way to get into the company and it did give you a good grounding in the mechanics of theatre, so it wasn’t a waste of time. I began to get more parts. It was The Gate who first staged Philadelphia and it put it on at the Gaiety for the Dublin Theatre Festival. We realised right from the start that there was something about this play.”

Philadelphia subsequently transferred to Broadway, opening there in February 1966. Morrissey was among the Irish cast-members who made the trip, though that had not been the initial plan.

“I was never intended to go to Broadway, only the main actors were,” he admits. “They were rehearsing over there and the actor doing my part had an Arizona accent so the producer said ‘Get the guy who played it in Dublin’. I was working in the Eblana and the phone call came from New York saying ‘Do you want to come to Broadway?’ I said ‘When?’ and they said ‘Tomorrow’. It was just one of those magic calls. To get to New York in the sixties, I was 23, I’ll never forget the experience, it was so open. Ireland was beginning to open up and I’d been to London but both here and the UK were still closed down compared to New York.”

Morrissey ended up enjoying an extended Stateside stay. “The Broadway run was about eight or 10 months and then we went on tour for nearly a year around America so I was away for a year and a half altogether," Morrissey says. "Then when I came back I was cast in Lovers with Fionnuala Flanagan and that went to Broadway as well. When we got there they recast the narrator with the great Art Carney. He was one of my heroes from watching The Honeymooners on TV. He had a wonderful comic timing. That turned out to be another huge Broadway success and ran for eight months then toured also.”

Fittingly, it was during the run of Lovers that Morrissey married his wife, Anne. The couple have a son and daughter, both of whom work successfully in IT, and four grandchildren. In 1974, Morrissey did his first one-man show, the Flann O’Brien compilation The Brother, which he has continued to revive regularly ever since. It was followed by Patrick Gulliver, about Swift, Joycemen, about Ulysses, and now Maeve’s House.

“I remember seeing the great Eamonn O’Kelly doing his seanachie shows and began to wonder could there be such a thing as an urban storyteller,” he explains. “There staring me in the face were the works of Joyce and Flann O’Brien who are not bad storytellers themselves so that’s how I got into doing them.” 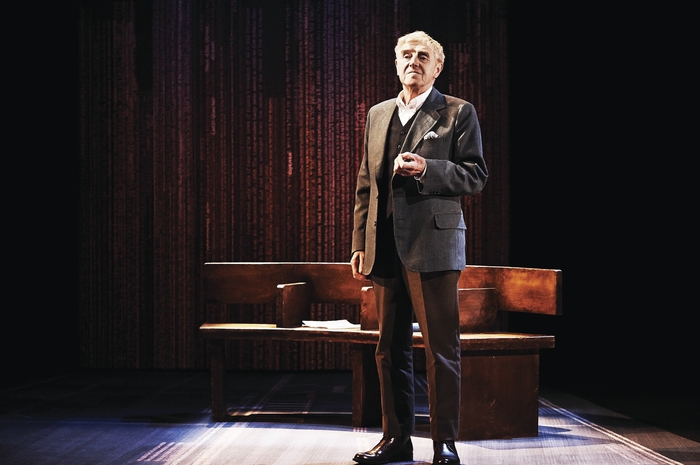 The 1970s saw Morrissey gain household recognition as a regular on Hall’s Pictorial Weekly. “At the time it was just a day’s work because the whole thing was done in a day,” he recalls. “It wasn’t until it finished that we fully realised the effect it had. It’s astonishing that people still talk about it all these years later. It took on all the sacred cows of Irish life, which hadn’t been done before, and people responded to that in an extraordinary way. Interestingly it was not produced by Light Entertainment or the Drama Department, it was part of the Features Department who were much more protective of their independence if there was any hassle. It was almost entirely Frank’s script, 26 minutes a week is quite an output.”

Since 2009, Morrissey has again been a regular TV fixture, playing Cass Cassidy in Fair City. “I was never a soap person,” he states. “They sent me scripts about this new character they were introducing and I took an instant liking to him and I am very glad I took the role. I’m still enjoying my time there, I enjoy working with the cast and crew.”

And so to Maeve’s House. How did Eamon come to grow up in the house of Maeve Brennan’s stories? “My parents bought the house from the Brennans when they moved to Washington,” he explains. "Robert Brennan was the first Irish legate to the United States. In the show I tell how when I was doing Philadelphia on Broadway, I used to come in from Brooklyn Heights on the subway.

"One day I was reading a short story in The New Yorker and the hairs on my neck began to stand up because it was clearly about the house I was brought up in. At that time the writer’s name appeared at the end of the story not the start, and when I checked I saw that it was Maeve Brennan. I did know about her and that she was a writer, my mother loved her work but I wasn’t interested in her at the time – I wanted to discover the world not read about the interior of our house! That’s what Maeve Brennan does she uses the details of a room to build up a picture of the people she wants to talk about.”

Morrissey went on to meet Brennan. “Having read that story, I resolved to make an effort to meet her. I wrote to her at The New Yorker and she invited me to meet her one afternoon at the Russian Tearooms. She could be very intimidating but when I met her she was very charming, friendly and encouraging. She is such a wonderful writer. We have produced great short story writers in this country and she is among the best of them, without question. Her life was extremely tragic, she went downhill and became almost a bag-lady. She almost disappeared off the landscape yet there was always an underground of people who loved reading her work and you can see why.”

As he prepares to bring Maeve’s House to the Town Hall, Eamon concludes by recalling his happy times working with Druid. “I have very fond memories of Druid,” he enthuses. “I first worked with Garry Hynes about 12 years ago. I think she is a great director, I love the way she analyses a play. It’s a great pleasure to go down and be totally locked into that little theatre in Druid Lane, it’s a very satisfying experience. I was in the DruidSynge cycle which was a massive undertaking for all of us, and right up to the first preview we had no idea how it would be physically put together, but it was such a plateau that after that I found when people would offer me a play I’d be thinking ‘Ach that’s only one play!’”