When award winning English novelist and short story writer Jon McGregor comes to Galway, to read at the Cúirt International Festival of Literature, it will be his second visit to the county in less than a month.

“I’m a bit aching and stiff,” he tells me during our Monday morning interview. “I’ve just got back from a week in Galway for a cycling trip. We started in Galway and went up around the coast, around Connemara, up to Achill Island, and to the Ox Mountains, finishing in Sligo. Cycling is my second passion after writing. As soon as I’m out on the road I don’t think about anything. It’s like what some people would call meditation, cycling allows you to relax, with just enough concentration not to crash into anything.”

From Bermuda to Norfolk

Jon was born on the island of Bermuda in 1976, but with his family leaving for Britain five months later, it “was not that formative” an experience. How did his parents come to be there though? “Dad worked there as a curate, it was his second posting. After he was first ordained he ministered in south London, then he saw an advert for the job in Bermuda and fancied a change of scene,” says Jon with a laugh. “They were there for about five years. My older brother was born there.”

Back in Britain, the McGregors settled in the east England coastal shire of Norfolk, and it was there Jon’s identity as both a man and later, a writer, were formed.

“I was always conscious of being an outsider,” he says. “Everyone I knew at school was born in Norfolk and lived locally, but we came from elsewhere. I was very conscious of that difference. I was also conscious of being the son of a vicar. We lived in a working class council estate, but in the vicarage. There was an awareness of growing up working class, but living in a middle class house, but having less money than my friends’ dads who worked in factories. As I got older, that all got to be quite a bonus. I could feel comfortable in working men’s clubs, and at the garden party in the bishop’s lodge. That’s a useful experience as a writer. You see something from the outside, but you also have the view from inside.”

Although he admits to “writing bad poetry in my teens”, a serious interest in writing did not develop until university. “I wasn’t one of those people constantly writing stories as a child and hiding them under my pillow,” Jon says.

“I wrote nothing seriously until university. I was doing a media production degree, so we studied film and radio. I wasn’t good at the logistics, or collaboration, but writing was the thing I could do, so I sat in my room and wrote stories and sent them out. I had some published in my final year. That gave me confidence to try and make a go of it.”

‘The Fens, it gives me the creeps’ 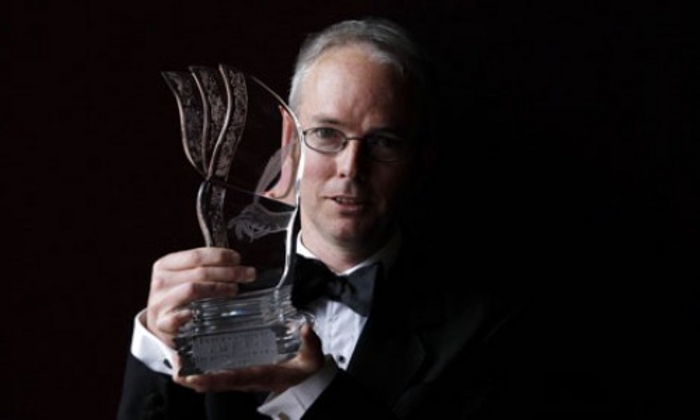 Jon established himself as an exciting new voice in British writing with his 2002 debut novel If Nobody Speaks Of Remarkable Things, which won the Sunday Times Young Writer of the Year Award and the 2003 Somerset Maugham Award, and made the Booker longlist. His second novel, So Many Ways To Being (2007 ), again made the Booker longlist, while his third, Even The Dogs (2012 ) scooped the 2012 International IMPAC Dublin Literary Award. His most recent work is the 2013 short story collection, This Isn’t The Sort Of Thing That Happens To Someone Like You, which was showered with critical praise. The Irish Times called Jon “an original”, while The Independent said, “McGregor’s writing is so distinctive that it becomes hard to compare to another”.

All the stories are set in, or linked to, The Fens, a flat, damp, marshy, region that straddles parts of Lincolnshire, Cambridge, Suffolk, and Norfolk. It is another part of Norfolk that has had a deep impact on both the man, the writer, and the cyclist.

“Every time I’ve been there, cycling in The Fens, it gives me the creeps,” he says, “and any place that gives you the creeps is a good place to set a story. I found it a very strange place. On paper, it’s a rural landscape, but it’s very industrial, with big farms, reclaimed marshlands, pumping stations, so it’s not rural in the way most people think is rural. It’s devoid of housing, but it’s an industrial landscape. There’s a weird sense of isolation. You can be a mile away from somewhere, but it takes five miles to get there because of all the drainage tunnels.

“When I was beginning to put those stories together, I realised they were in a rural setting. My novels have all been very urban. I saw it was a unifying thing. I wanted the stories to all happen in the same place, but be isolated from each other, as though the characters are in sight of each other, but have no contact.”

‘The short story can be anything it wants’

Jon will be reading from a new short story - as yet untitled - for Cúirt (“It’s about a young man trying to lose his virginity, but he meets God on the way. I think that will go down well in Galway - sex and religion!” ), and as a short story writer he has an original voice not confined by the restrictions writers, readers, and publishers can, and often do, place on the format.

There are stories in This Isn’t The Sort Of Thing... just one line long, while others such as ‘French Tea’, build exclusively around one single event or moment in time, often the standard form of what a short story is expected to be. Yet, the collection contains more daring work, such as a novel in miniature (‘I’ll Buy You A Shovel’ ); a story interspersed with an epic poem (‘In Winter The Sky’ ), or where a story is rendered in the form of an information manual or document (‘The Last Ditch’ ).

“When I was putting the collection together,” says Jon, “it dawned on me that this is my opportunity to do something with the short story. I thought this might be my only chance as it is rare to publish short story collections. You can be restricted to 3,000/4,000 words, or often publishers want 1,400. There is quite a lot of expectation around structure or form, but what I find exciting is that the short story can be anything it wants. You can go to town on what it wants. I had fun playing with the idea of how you write a story. It’s fun to do something that is a glimpse, or a novel in miniature.

“The only definite thing is that you need to read it in one sitting. That’s incredibly liberating for a writer, as you can get to do complicated things with the layers of the story, and the levels of meaning, set something up that you will come back to at the end. If someone can read a story in one sitting they will come with you, ‘Oh I finished that story, I’ll read another.’ You can’t rely on a reader to stick with you through a novel.”

A striking feature of Jon’s stories, is that often there is as much information left out as there is put in. This creates ambiguity and allows the readers’ imagination to take over and speculate. This is particularly the case with ‘Wires’, where after an accident, a young woman finds herself stranded by the motorway, with two men willing to help her. The ending is deliberately inconclusive.

“That’s very important to me,” Jon replies. “That’s what I thrive on, allowing the reader to bring their own ideas and expectations to bear, and allowing for different possibilities. I often get asked about ‘Wires’. People want to know what happened next. I did write various endings, but I kept coming back to that moment. The whole point is that whatever happens next, she will be changed by the experience. Part of being changed is that the world is never as safe again as you thought it was. It’s a sad, but inevitable part of growing up. ‘Wires’ came second in the BBC Short Story Competition, and the winning story was by DW Wilson, whom I’m reading with in Galway, so it’s all come around nicely.”

Jon McGregor and DW Wilson will read in An Taibhdhearc on Friday April 24 at 1pm as part of the Cúirt festival. The event will be chaired by Mayo poet Martin Dyar. For tickets contact the Town Hall Theatre on 091 - 569777 or www.tht.ie