Some weeks ago Little John Nee captivated the Town Hall studio with his autobiographical show The Galway Years, and he returns to the venue next weekend with more engrossing memoirs in The Glasgow Years in which he will revisit his 1960s childhood.

Both John’s parents were from Donegal and the county was an abiding presence in his Glaswegian upbringing. “I went to school in Holy Cross and there was a big Donegal influence there,” he tells me. “Half of the boys in my class had Donegal names and many of us went to Donegal for summer holidays. My mother and most of her friends were from Donegal so there was a whole Donegal community; when we’d be talking about home with our friends we’d be meaning Donegal.

“The Glasgow aspects, like Glasgow Celtic, also had a strong Donegal influence. That permeated a lot of things. My mother moved to Glasgow in the 1930s and my dad moved over just after World War II, they met in Glasgow. We’d go to Donegal every summer. There was a minibus every weekend, McGinleys and Feda O’Donnell, that’s how I’d go over, the bus would drive straight from the Gorbals to Letterkennny.”

The ‘Glasgow aspects’ John refers to also entailed a strong Protestant/Catholic divide. “There was a lot of sectarianism,” he acknowledges. “Right beside our school was a Protestant school and you would have crisp bags full of water thrown over the wall and there would be chases going on. I remember us singing sectarian songs when we were seven-years-old.

“I remember one day being with some Protestant friends looking into the secondary school and they were shouting ‘Catholic cats eat the rats’ then they turned around and said ‘Not you John, them Catholics in there!’ It was a time in Glasgow when there were lots of gang fights so there was a sense of violence on the streets. That sense of danger was part of what I grew up with. My own parents were totally non-sectarian and that was emphasised a lot. I want to tap into the innocence and magic of that time, and that sense of a universe forming which is what it is like as a child, you have all this information coming in.”

‘Ordinary people but quite amazing too’

Little John describes his mother and father as “ordinary people but quite amazing people too”. His father was a site agent on building sites and his mother was a domestic in hotels. “I remember once, as a kid, friends telling me they were middle class,” LJ recalls. “I went home and asked my mother were we middle class and she said, no, we were working class. That was my first exposure to that.”

I ask John were there any formative influences in his childhood that steered him toward his adult career as a performer. “There are a few influences I mention in the show,” he replies. “My uncle in Donegal got a gramophone with Will Fyffe, the Scottish music hall comedian and singer, who sang ‘I Belong to Glasgow’. My father learned off a couple of his pieces. ‘Daft Sandy’ was his party piece, and that had a profound influence on me when I was a little boy, it was a story-telling music hall piece. It was also the time of The Beatles, so there was that influence as well. I saw a film as a little boy called Ships Ahoy with Frank Sinatra and Gene Kelly and I went and re-created a routine from it at school with my friends. 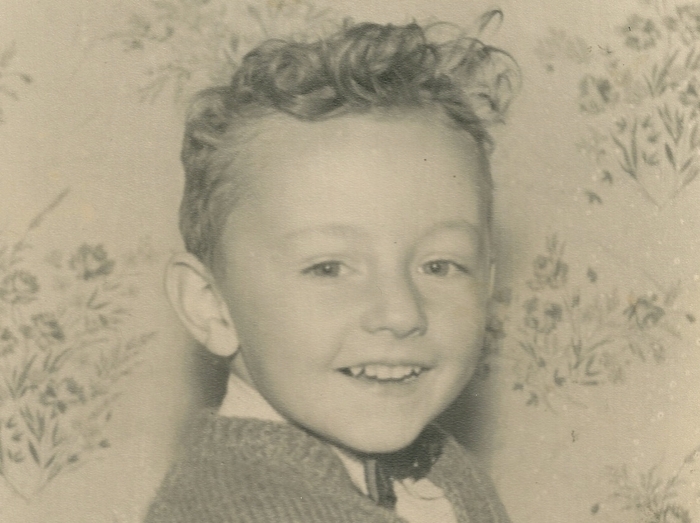 Little John as a child in Glasgow.

“I used to write my own shows then. There was also a teacher called Miss Kilfedder and she said to me when I was about seven or eight that I was going to be the next Lennon/McCartney. Back in Donegal I had cousins who were in bands so I’d be going round hearing them play music and that was another influence. My mother had lots of records that we’d play, people like Patsy Cline, Hank Williams, and so on.”

For all the Donegal influence in his young life it was still something of a jolt for John when his family moved back there. “When the family first decided to move back to Donegal it was an upheaval,” he states. “I was 11 and starting to get interested in girls and I had lots of friends in Glasgow. My mother always encouraged me to be independent so by the time I was 11 I would rather have stayed there, but once the idea settled in I looked forward to it.”

‘Do I really want people to know that?’

The Glasgow Years emerged as one of five ‘works in progress’ performances as part of Little John’s Theatre Artist Residency in the Town Hall Theatre last year, funded by the Arts Council and the Galway City Council. Based on different periods in his life and the locations associated with those times, this series of shows combine into a funny and poignant journey, sometimes shocking in its revelations of despair and struggle, yet inspiring in examples of synchronicity and serendipity.

“The first idea was to do one show entitled All the People I Love Are Dying which grew out of a period of grief when a lot of people dear to me died,” LJ reveals. “It created a heightened sense of the transience of the human experience. I wanted to take those bright flashes of life that make an impression on us and make a show on that.

“Then I decided to do a series of shows and make one play out of the five. But when I saw the response those individual works got I realised they had their own integrity as single plays so I decided to keep them as individual plays. I have a notion for a sixth show which would be The Tullyglen Years, which would be ‘the years of the imagination’, where you go beyond one location and realise the world you live in is the world you create through your imagination and attitude and how you relate to the world.”

One of the striking things about The Galway Years show was how personally revealing John was in his recollections, admitting to times of problems with alcohol and suicidal feelings.

“That candour was difficult in itself,” he admits. “It wasn’t only my own life I was talking about, there are things that are to do with other people’s life as well so I had to have respect for them. These shows are very stripped back, they are taken back to pure story form. When the content is my life you do think ‘Why would anyone be interested in that?’ There are things you wonder ‘Will I tell that?’ It exposes me, it is very vulnerable revealing things about your own life, you are wondering ‘Do I really want people to know that?’

“There is always benefit moving beyond fear, and that vulnerability of wondering if it is safe, then just taking the courage of deciding it needs to be said, I feel a more complete person after it. The shows are very draining I have to admit, but I choose not to have them as glossy stories, I don’t set out to present myself in a good light or romanticise about my life.”