Galway writer Lisa McInerney has been hailed by The Irish Times as “the most talented writer at work today in Ireland”. For several years, as Sweary Lady, she penned the award-winning blog The Arse End of Ireland, about life on a Galway council estate.

Julian Gough, no slouch of a writer himself, was a huge fan of the blog. Calling Lisa “my favourite Irish writer born with ovaries”, he wrote, “I had no idea who Sweary Lady was, but weekly, I roared with laughter, and recognition. Her work had an incredibly refreshing, no-bullshit energy, her sentences were slangy, five per cent as Gaeilge, and swung like jazz, and her sense of humour was explosive, dangerous, and original.”

Those qualities are also present in McInerney’s terrific debut novel, Glorious Heresies, which has just been published by John Murray and is already attracting rave reviews.

The Arse End of Ireland

Glorious Heresies is set, not in Galway, but Cork, and revolves around one messy murder that affects the lives of five misfits who exist on the fringes of Ireland’s post-crash society. Ryan is a 15-year-old drug dealer desperate not to turn out like his alcoholic father Tony, whose obsession with his unhinged next-door neighbour threatens to ruin him and his family.

Georgie is a prostitute whose willingness to feign a religious conversion has dangerous repercussions, while Maureen, the accidental murderer, has returned to Cork after 40 years in exile to discover that Jimmy, the son she was forced to give up years before, has become a Leeside Tony Soprano. In seeking atonement for the murder, Maureen threatens to destroy everything that Jimmy has worked so hard for.

“I’ve always written,” Lisa tells me. “I once said I wrote my first novel when I was eight, though it wasn’t very good obviously! I wrote all the way through school, I remember going to Saturday study before the Leaving Cert and everyone would be studying but I’d be writing stories, it’s all I’ve ever done or wanted to do. This book is the culmination of that.”

I ask her about her Galway blog The Arse End of Ireland, “I started the blog as a base from which people could read my stories,” she replies. “My plan was always to write a novel. I knew how difficult it was to get a break into the whole literary scene, especially as I am not part of that scene. I didn’t do a creative writing MA or I wasn’t part of any writing group so I knew I needed some base. That was what the blog was about and I suppose it was an education too.

“When you write a novel or short story you aren’t always going to know what other people will think of it but it is different with blogging, they are in there straight away telling you, agreeing with you, or saying this piece or that piece is shite. The writing of the blog didn’t really influence the writing of the novel.

"I always say I was a novelist who briefly blogged rather than a blogger turned novelist. The blogging was like an advertising platform to say this is what I do, read it and let me know what you think, because eventually I will be foisting my fiction upon you. The main influence of the blog is that any time you are writing, no matter what you are doing, you are always honing your work and getting better. That is the way the blog informed the novel.” 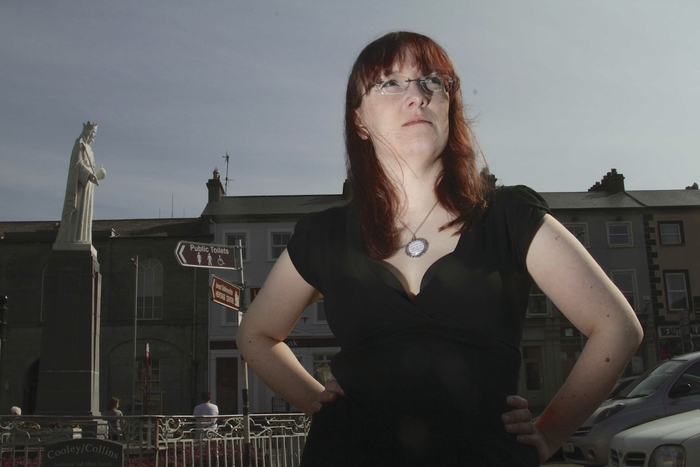 ‘People are people and react the same’

Returning to Glorious Heresies, how did she come to choose Cork as the setting? “I’ve been up and down to Cork all my life,” she explains. “When I was small I had cousins in Carrigaline, we’re a navy family. I went to UCC and my husband is from Cork so in that sense Cork would be my town, there is no city I know better than it, I wouldn’t get lost there but I could get lost in Galway.”

Her characters are vividly realised and believable. The very first pages of the book in which Ryan and his girlfriend have their first sexual encounter perfectly captures his heady mix of anticipation, excitement, and nervousness. I comment on how well she captures the male characters in the novel.

“It’s great to hear that, you’d have a certain unsureness writing in a different gender,” she states. “There is a great quote by George R Martin where someone said to him ‘You write women so well, how do you do that?’ and he replied ‘I have always considered women to be people’ and if you reverse that we are all people. Obviously we look at the world through different lenses and our genders will inform a lot of the stuff that happens around us, but at the end of the day people are people and react the same. If you know a character it doesn’t matter whether they are male or female, you can see the world they are living in, that is the gift a novelist should have or at least try to hone, to be able to look at the world through someone else’s eyes.”

It was a challenge from her agent which created the seeds of Glorious Heresies. “When things started kicking off for me was the publication of my short story in the Faber and Faber Town and Country anthology edited by Kevin Barry,” she says. “Then my agent asked ‘What have you got for me?’ I said I had this notion of a woman, late to middle aged, walking down the street with this terrible secret; that no-one could see she has just killed someone.

“I said I wasn’t sure whether to write a short story and he asked did I want to write stories and I said no, I loved novels. I like to stay with characters and he said write a novel then and have it to me by October, because there is a book fair then. This was in May! But he said, ‘You’re a quick writer, off you go!’ I actually had the first draft finished by August, I flew through it.”

That central female character is Maureen, a remarkable creation - sharp-tongued, unflappable, yet with her own inner burden of guilt.

“Maureen was the launch-point of the story but a lot of these characters I had in my head for years,” Lisa reveals. “Ryan has been in my head for a long time. That image of the little old lady I told my agent about became Maureen. I fit the image around these pre-existing characters, that’s probably why it took me so little time to write it because I was already very familiar with these characters.”

Married with a teenage daughter, Lisa is already working on her next novel. “I have a two book deal with John Murray and the first draft of my next novel is already written,” she says. “As long as people keep giving me the opportunity to write novels, I’ll keep writing them because my head is full of them.”

So it looks like there is plenty more to look forward to from the gifted pen of Lisa McInerney. In the meantime, readers are sure to relish Glorious Heresies, which is available now from all good bookshops.