Rarely a week goes by when the strife in Israel/Palestine does not make headlines in the media. In recent years the conflict has seemed ever more intractable, the people increasingly polarised and entrenched. Yet in spite of all, there are still those on both sides of the divide working for mutual understanding and a peaceful resolution of the conflict.

Next Saturday March 21, the Town Hall Theatre stages Bassam, a play written by an Israeli and performed by a Palestinian, which shows that co-operation remains possible and that theatre can be a powerful tool for dialogue.

Bassam is based on the true story of Bassam Aramin, co-founder of the Israeli-Palestinian peace movement Combatants for Peace. Aramin became involved in the Palestinian struggle as a boy growing up in Hebron. At 17, he was caught planning an attack on Israeli troops, and spent seven years in prison. In 2005, he co-founded Combatants for Peace, an organisation of former Israeli and Palestinian combatants leading a non-violent struggle against the occupation. Since then, Bassam has not once picked up a weapon – not even when his 10-year-old daughter Abir was killed by a rubber bullet fired by Israeli border police.

The play’s author and director is Idan Meir, a former member of the Israeli Defence Force, who became a refusenik and himself joined Combatants for Peace. He now lives in Sligo. It is performed by Fadl Mustapha who was born in a refugee camp in Lebanon. Fadl is married to an Irish woman, has three daughters and lives in Donegal.

‘I am not fighting anymore’

Ahead of Bassam’s visit to Galway, Idan Meir took some time to tell me his story and that of the play, starting with an account of how he became a refusenik.

“My journey to becoming a refusenik and peace activist started with an incident in Lebanon in 1997 when 12 members of my unit died in one night, including my best friend,” he reveals. “This shock was very traumatic, it provoked loads of questions that I started to ask myself regarding the price we pay when we are involved in acts of direct violence. I was one of the soldiers sent to knock on the door of my best friend’s mother to tell her that she had lost her son. For me that was an eye opener. From that incident it took me 10 years to get to the point where I had enough of an understanding of the wider context to take the big step of saying ‘No more’ and that was with the help of Combatants for Peace.”

It was writerly research that initially led Meir to the organisation. “I first joined Combatants for Peace as an outsider who just wanted to explore some stories,” he explains. “I wanted to find the stories that Israeli society doesn’t want to listen to, those voices that we try to hide; the voices of people that were involved in the violence, both Israeli and Palestinian. Once I started hearing their stories I realised this was my story too.

“In both societies people feel the only way to solve the conflict is by taking a stance and choosing to be active, and if you’re not fighting you’re seen as a traitor. Only when you have a group that supports you in this action, like Combatants for Peace, then you feel ‘OK, I am not alone, there are other people that think like me.’ It let me feel I can follow my truth and allowed me to say ‘I am not fighting anymore. I am not doing my military duty; my duty is to build bridges not create more destruction.’ That was a turning point for me. I was involved in the violence and knew it was wrong but now I had the courage to refuse.”

It is clear that Meir deeply admires Bassam Aramin, the Palestinian subject of his play. “We never hear about people like Bassam or other peace activists in the news, it’s not ‘sexy’ enough,” he says. “When I met Bassam I wondered how this man could be so peaceful. Even after the tragedy of losing his daughter he had no thoughts about revenge. He only wanted justice, but justice that would be from the courts. It actually gave him more power for his work and for other parents, other victims; that was Bassam’s way.

“For me it was important that Israeli society knew there were people doing such work. What creates change is Israelis actually meeting Palestinians. I changed when I met Bassam. He was my trigger and my inspiration to say out loud ‘I am not going to stand at a checkpoint while Bassam and his family and kids are trying to cross. I’m not going to be part of this game anymore.’ More and more Palestinians and Israelis who meet each other have the chance to explore this and create change. And the change isn’t just in yourself but your family; my family changed, my sister, parents, even my nephew, all think differently now because of what I went through.” 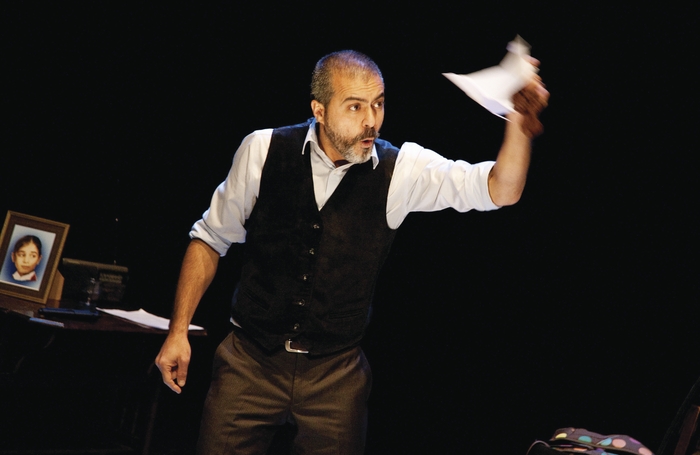 Meir says most of the details in the play are based on fact and that what audiences will see “is a dramatic situation and a character I have based largely on Bassam’s story”.

“Onstage there is a Palestinian who has to understand the price he pays for his actions,” he continues. “He is threatened by his son that if he will not take revenge on the blood of this soldier then the son will blow himself up in a suicide-bomb attack on Israel. That happened the night before Bassam was due to travel to Europe to collect an award for his peace activism.”

Bassam premiered in Israel in 2008 when it was performed by the famous Israeli actor, Shlomo Vishinsky who is a bereaved father, like Bassam Aramin. His son was a soldier who was killed in Gaza.

“I chose him to play the role because I thought it would be too big a challenge for an Israeli audience to listen to a Palestinian actor telling a Palestinian story,” Meir explains, “but for them to listen to a Jewish Israeli bereaved father relating the story of a bereaved Palestinian father that is already an act of humanity. I wanted the action of humanity to be an extra presence in the production for the audience. When I moved to Ireland it was a different story and I thought it would be a good thing to give this voice back to the Palestinians. That is when I chose Fadl to do the role and he does it brilliantly.”

Meir describes the story of his meeting with Fadl as “magical”; “I had a reading of the play in the Grianan Theatre in Letterkenny and a local actor did the role. Fadl came, suspiciously, to see what this Israeli writer was going to tell an Irish audience. He didn’t believe I would write something that could be in tune with his ideals but he was very moved by the play. We spoke afterwards and discovered we know the same people from Combatants for Peace.

“Fadl had met some of my colleagues and close friends at an event in Belfast. We also both have Irish partners and both of them are from Letterkenny. Then he told me he lives in Ramelton and I stay there sometimes. So with all these coincidences we had to see how could we work together and, since 2012, we have been touring with this show.”

Bassam is at the Town Hall on Saturday March 21 at 8pm. Tickets are €12/10 through 091 - 569777 or www.tht.ie The performance will be followed by a post-show discussion with both Meir and Mustapha. For more information on Combatants for Peace see http://cfpeace.org.