THERE IS no doubt that one of this year’s hottest tickets in Irish theatre is Decadent Theatre Company’s imminent production of Martin McDonagh’s The Pillowman, which opens in the Town Hall Theatre later this month. So despite what you hear on the radio, Galway, not Dublin, gets to see the Irish premiere.

Ever since he burst onto the scene in 1996 with The Beauty Queen of Leenane, McDonagh’s plays have wowed audiences and critics around the world, garnering shedloads of accolades and awards in the process.

First staged by the Royal National Theatre in 2003, The Pillowman won the Olivier Award for Best New Play and New York Drama Critics’ Circle Award for Best Foreign Play. Amazingly, it has taken until now for the play to receive an Irish production and, after such a long wait, there is intense interest in seeing Decadent’s staging, which goes on a high-profile national tour following its opening run Galway.

‘The biggest show we’ve ever done’

Director Andrew Flynn readily admits that this is his company’s biggest show ever. “It’s a huge show for two reasons,” he declares. “Firstly there has never been a professional Irish production of it so for Martin to give us the rights was a big thing. Secondly, it’s just a huge play; we have nine actors in the production and it’s very demanding in terms of set and costume. We’re also playing two weeks in the Town Hall, two weeks in The Gaiety, a week in Cork, and four weeks in Belfast. It’s definitely the biggest show we’ve ever done and the most high profile.”

It was quite a coup for Decadent to secure the rights for this Irish premiere but Flynn reveals it was a far from straightforward process.

“Martin initially gave me the rights seven or eight years ago,” he reveals. “I had approached Mike Diskin who was very interested in producing it and Cork Opera House were willing to be a production partner. But I knew we needed more investment, there is no way of doing The Pillowman by cutting corners and I didn’t want to do a production that did not fully serve the play.

“So I then handed back the rights to Martin. A couple of years later I was doing a lot of work with the Lyric and they said they were willing to get involved but then I learned another company had snapped up the rights in the meantime, so we lost the rights again for three years.

“For some reason the other company never took up their option so we finally got them back again. It was a long road but we ended up with what we wanted. And maybe I’m now in a better place as I am that bit older and more experienced to be taking on something like this. So all’s well that ends well!”

The Pillowman opens in a prison cell where a young writer, Katurian, is being questioned about the children’s tales he has written – grim tales which seem to have inspired copycat killings in the streets outside. Two interrogators tease out the resemblance between real and fictional worlds while probing the personal responsibility of the writer. Story piles upon story as the evening progresses, and the tension mounts when parallel interviews taking place in the adjoining cell with the writer’s brother are revealed. It is completely different from McDonagh’s Leenane and Aran Island plays.

“That’s where a lot of the intrigue comes,” Flynn observes. “I think all of Martin’s plays are brilliant but he has his detractors who would say that all he can write are these west of Ireland plays. Then you get The Pillowman which is nowhere near that. It still has his distinct rhythm and voice but the story is just captivating. It deals with themes that are topical at the moment, like the whole issue of censorship. It’s a fantastic piece of writing, without doubt it is one of his best plays.”

The totalitarian milieu gives The Pillowman a McDonagh-meets-Pinter feel, yet its revelling in stories and the layering of stories within the play also imbues it with a sense of McDonagh-meets-Enda Walsh.

“It is all about stories,” Flynn agrees, “and within the play the stories come to life which is a huge theatrical element to the play; even the detectives have stories. When I first met Martin one of the things he said was ‘I’m a storyteller’ and that is his belief as a writer. That line is uttered throughout the play.

“What is brilliant about the piece is Martin has a very dark sense of humour and the play is extremely funny. I think that is why he is so successful, people know he’ll take them on a big journey and they’ll be guaranteed a great night out with lots of laughs, yet it is also quite moving in places.”

It may be tempting to view Katurian as version of McDonagh himself but Flynn refutes the suggestion.

“I don’t think it is as simple as that at all,” says Flynn. “Martin sets the play in a totalitarian state and it is kind of timeless. By setting it in that world, it is a world of suspicion. In the play you are brought on a journey where there is always the possibility that this is a complete set-up, that there is no truth to these detectives, that perhaps they just don’t like writers and this is their way of getting one off the street.

“That doubt, that possibility, provides drama in itself and means the audience are constantly trying to figure out is Katurian innocent or does he know more than he admits to. You’re figuring it out as you go along which makes for great theatre.” 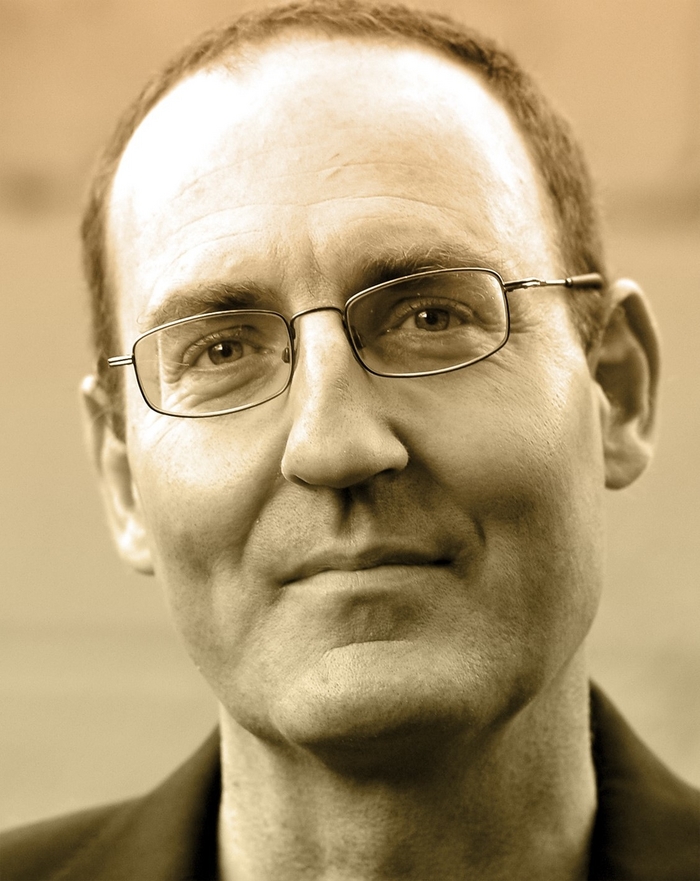 One intriguing aspect of the production is the casting of comedian David McSavage who makes his theatrical debut as lead detective, Tupolski. “Martin came to me with the idea of casting David,” Flynn explains. “He had seen his comedy work and David was also in the film Calvary and was excellent in that. When he suggested David I could see straightaway that it made sense for the character and he is great.

“One of the key things for Martin with that particular role was to get somebody who could get comedy out of it and David has a similar darkness and outlook. He understands Martin’s dark, twisted, world. The chemistry between himself and Gary Lydon as the other detective, Ariel, is terrific.”

A measure of the production’s high profile is that The Sunday Times has come on board as official media partner.

“That’s down to Pat Egan, our promoter,” Flynn tells me. “Going into The Gaiety for two weeks is giving us a marketing budget we would never normally have. All I want to do is be in rehearsal. It is the same process you go through each time, you still want to do the best show you can. With all the other stuff, you’re aware it is happening and of course it creates a bit of added pressure but you just have to get on with it and try and serve the play and not be affected by how big a profile it has or that there is a big PR machine behind it. You’ve got to bat that away and so far we are doing that well!”