THEATRE LOVETT brings its unique brand of theatrical magic to the Town Hall Theatre next week with its latest touring show, The Girl Who Forgot To Sing Badly, by Australian author Finegan Kruckemeyer.

Brilliantly performed by Louis Lovett, the play centres on unlikely heroine Peggy O’Hegarty. She and her parents are professional packers; they squeeze fruit into tins, foxes into boxes, even bikes into brown paper bags. All the while Peggy sings with the voice of an angel – but an angel, alas, who cannot sing at all.

One day work suddenly stops and Peggy steps outside to find everyone in her city has gone, so she embarks on a wild trek across snowy lands and stormy seas on a heroic quest to save the day - a quest where we learn about love, loss, and the courage to sing on or off-key.

Since its formation in 2010, by husband-and-wife duo Louis Lovett and Muireann Ahern, Theatre Lovett have been regular and hugely popular visitors to Galway. The Girl Who Forgot To Sing Badly, which has already met with great success both in Ireland and internationally, is sure to delight Town Hall audiences of all ages and sizes.

While some might view the play as children’s theatre, Louis Lovett is at pains to emphasise the company’s work has a broader reach.

“We very definitely set out to make work that appeals equally to both young and old at the same time,” Lovett tells me. “When we’re making a piece of work we’re always looking at how it is going to land with both an eight-year-old and a 40-year-old. We often speak of our ‘audience radar’ which needs to be in good mettle. We want to be like The Simpsons, making work that appeals to both young and old.

“I believe a show is made up of many moments and each moment delivers a little payload of happiness, wonder, fear, or excitement. All of these different moments go to make up a good show. We have to make sure our moments are landing both for the younger audience and the older.

“We can choose that one moment that is purely designed for the nine-year-old and two moments later we have something very much for the older person. Then we’ll have the joyous moment that is for everyone. It’s like baking a cake when you’re deciding how much of this or that ingredient to put in. Recently, we’ve found there is more shade than light getting into some of our work so it’s becoming a little darker and more tantalising. When you start introducing those elements into a play you have to know how deep into the woods you can go.” 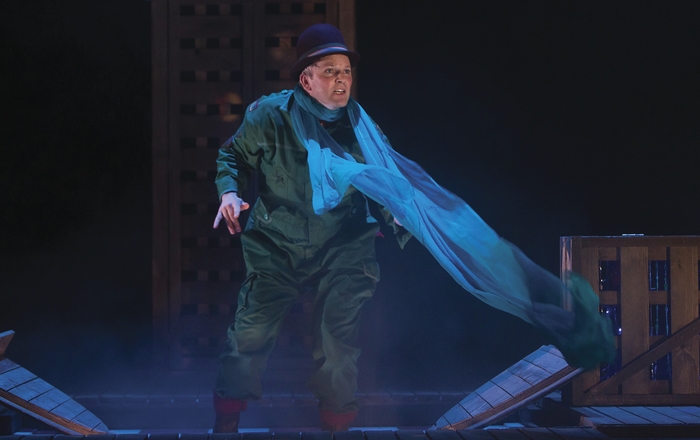 Theatre Lovett first staged The Girl Who Forgot To Sing Badly in 2010. The play was specially written for Louis by Finegan Kruckemeyer, a writer with more than 70 plays to his credit and whose work has been staged on five continents.

“This was the first of Finegan’s plays we did, then we also staged The House That Jack Filled, which we brought to Baboró a few years ago,” he says. “What really attracted us to his work first of all was his use of language and his gently anarchic way of playing with language.

“He has that Dr Seuss-like trickery within a sentence where you almost have to listen back to it to realise how he has been juggling with the words. Onstage, you really begin to appreciate the complicity of the language, I can deliver a line and I know that for the next 30 seconds children are relishing the music of that line or the tease of the line, the image that it conjures up. I know for 30 seconds I can take a little subliminal breather because they are going ‘Wow’ over the line.

“Likewise, with the set by Paul O’Mahony it’s the same thing, there are many moments within the show where the set does something and I can take that little step back as the audience go ‘Wow’. For a one-person show to have those allies with you onstage is really wonderful. Finegan has immersed himself in the world of children’s literature for many years, he collects old original children’s books. He conjures up fantastical stories that nearly always have an epic journey where the protagonist has to overcome certain ordeals. This play is a rollercoaster for the entire audience as we follow Peggy O’Hegarty’s adventure.”

‘Shows never came to our school’

Lovett has been making shows for young audiences for more than 20 years. While it is a sector of Irish theatre that has developed a lot in that time, he argues there is much scope for improvement.

“When I was a young fella I never went to theatre except for the odd panto in Cork,” he observes. “Shows never came to our school but nowadays it’s very different. Things are better than they were 30 years ago but it’s not much of a boast to say that. They are certainly not accelerating toward a place that I would be proud of in this current economic climate.

“We’ve just returned from London where we played in Stratford Circus Theatre. We were very privileged to be part of an initiative there called Every Child A Theatregoer; in the borough of Newham, where 4,000 children in years five and six were given free tickets to a theatre show by the local council. I met the mayor of Newham and some of the councillors and told them I will show off the fact that I was part of this. Stuff like that is heartening yet is also very, very rare.

“In Ireland things are better than they were but schools are finding it increasingly difficult to get their children to theatre due to transportation costs. So even while the theatre is there on offer, very often it is not translating into children seeing it because they can’t afford to.”

Louis offers some concluding remarks on The Girl Who Forgot To Sing Badly: “In the realm of children’s theatre this show stands out for the production values, from Paul O’Mahony’s magnificent set which is almost like a second character, it’s a must-see. I had a young chap in London last week and at the end of the show he put up his hand and pointed to one especially beautiful part of the set and asked ‘Can you buy that?’

“This show has played the Sydney Opera House, on Broadway, in London and Edinburgh. For an Irish show for young audiences to have attracted that level of international invites is the proof of the pudding as to its quality. I’m delighted now that Irish audiences can get a chance to see a show that New Yorkers and Sydney-ites have been asking after for years.”