WELCOME TO the world of fashion retail - a labyrinth of sequins, hangers, sales targets, and bunions where ‘the customer is always right’. Four shop employees. One day on the shop floor. A day so jam-packed it is bursting at the seams, and the workers feel as disposable as the clothes they sell.

This is the setting of Katie O’Kelly’s acclaimed solo show Counter Culture, which comes to the Town Hall Theatre on Tuesday January 20 at 8pm.

Katie is the daughter of celebrated actor/writer Donal O’Kelly (who also directs Counter Culture ) and she readily admits her father’s influence was instrumental in her finding her own career onstage.

“Growing up I was always either helping out with dad, setting up shows or sitting backstage watching him do them and I loved the whole experience,” she declares. “I loved the energy in theatre and that’s what attracted me because I was quite a shy child. When I was pondering what to do after school I decided to give theatre a go and I fell in love with it.”

Working with her father gave Katie the grounding for the multi-character show that is Counter Culture.

“I acted in dad’s play Joyced which has about 30 different characters,” she tells me. “I did about 200 performances of that over the last couple of years so that kind of style was in my head. I knew I wanted to write a show about retail and if you’re going to do that you have to have all the characters.

“It’s like a hierarchy, there are so many layers, the big bosses, the management, the shop workers and customers. I couldn’t see any other way to do the show except multi-character, it also keeps me on my toes as a performer!

“I love playing all the different characters, morphing from one into the other. That’s part of the joy of theatre that you can create different characters and not just be one person on a stage, unlike film you can use the audience’s imagination to help create a whole new world.” 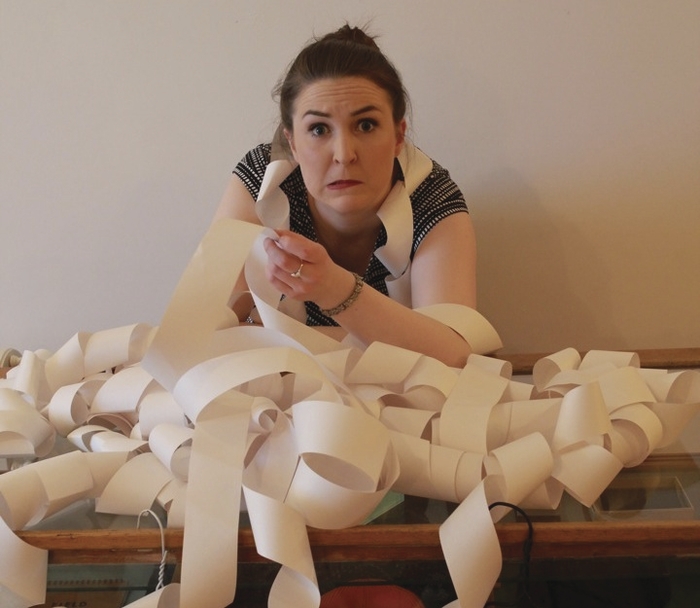 Describing Counter Culture, Katie describes it as being “like a modern-day fairytale”. “You have these very different characters and they go through a change when they’re brought into this world,” she says. “All chaos breaks loose and you have all the crazy people who wander in and out of the store throughout the day. Some of them are a bit magical and other-worldly and I think that adds a nice layer to it.

“Two of the main characters are a granny and granddaughter and they are both working in the store and they are like fictional versions of myself and my own grandmother.”

The play bubbled up from Katie’s own experience of working in retail. “I had worked in a department store, that’s where I got the idea initially. I knew I wanted to do something about retail because of all the mad experiences I had,” she said. “It’s a crazy world. I wanted to show the role of workers in retail; it’s quite a paradox, there’s this training they go through and there is an image of the store wanting the workers to be liked so they’re all very smiley and ‘We’re one big family’ but the actual reality of working in retail is completely different. I wanted to do something about that.

“When I worked there we were terrible, we’d always be sneaking up to work in the lingerie section because that was the only area that was carpeted, your feet would get so sore, and that’s still a huge part of it, it’s almost medieval, having to stand for eight hours.”

An image of Katie’s grandmother was a key influence in the show’s gestation. “When I was thinking about doing the show I found this photo of my granny, she worked in Clery’s for over 30 years. I found this photo of her outside the store on strike for better pay and working conditions in 1983. Nowadays, people don’t know their rights, they feel like a cog in the machine.

“When I was researching the show it was the centenary of the Lockout where we were celebrating workers standing up for their rights yet in 2013 you also had zero hour contracts coming in which basically leave workers with no stability and I wanted to give a voice to that.”