JOE BOSKE'S keen eye and sense of humour shines forth gloriously in Buying Yak Milk In Gurtymadden, his new book, published by Artisan House, which will be launched as part of the Clifden Arts Festival.

The book includes drawings, cartoons and comical writings in prose and verse, all bearing the distinctive Boske stamp. Topical issues such as veganism and tourism attract the same wry commentary as more traditional concerns of drink, sex, and religion.

The book’s quirky titled is explained by Boske himself, in similarly quirky fashion, in the introduction: "On a hot summer’s day some years ago, I was enjoying a few pints outside my local back here in Clifden, having just returned from a spot of beachcombing down the Lower Sky Road. A fair number of tourists were milling about, when a gentleman from the metropolis approached me with a query: Would I happen to know where he could buy… and here is where my memory deserts me I’m afraid… I recall it was something you might quite easily obtain in a big city, but would be hard-pushed to find in a small seaside resort on the west coast of Ireland, with only a handful of shops and half of them shut down. 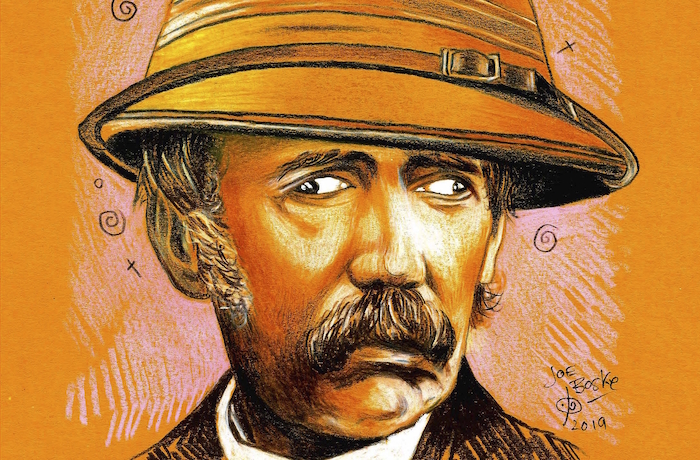 "‘My good man’ I said with a tongue slightly heavier than its specific weight, ‘you’d stand a better chance trying to buy yak milk in Gurtymadden.’ ‘Buying yak milk in Gurtymadden, eh? Where the heck did that come from?’ I pondered with more than a knowing nod from Arthur and the hot day that it was in it. ‘That’s the perfect title for my next book,’ I thought, fishing out the peann luaidhe."

“I like doing cartoons and the mad writing was always there. I had the idea for this book for a long time but some pieces needed ‘dickying up’ first'

Joe deploys that trusty peann luaidhe to great effect throughout the book with the gems on display ranging from his unique west-of-Ireland surrealistic imagery to witty stories and rhymes, such as, “‘But I can’t remember any animal fables’ ‘Relax, I’ve got an Aesop my sleeve.’” A Boskean limerick proceeds thus: "A young hippie chick from Mountmellick/Met a guru who looked like Tom Selleck/He read her a Sutra/on the shores of Lough Cutra/and gave her a rub of the relic." 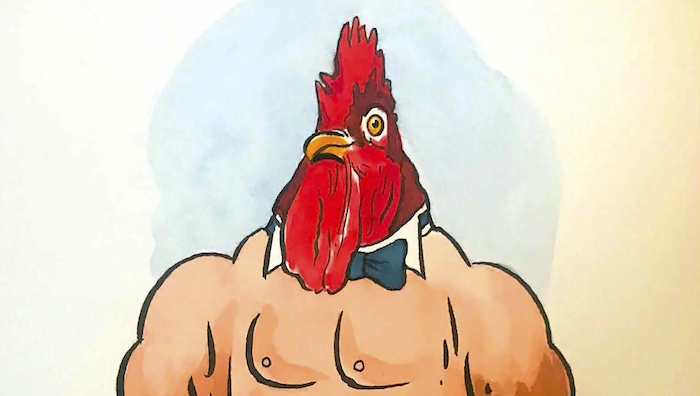 While many will know Joe’s numerous paintings, posters, album covers and book illustrations (highlights of which featured in his 2016 publication Joe Boske: The Works, also published by Artisan House ), Buying Yak Milk In Gurtymadden showcases seldom-seen aspects of his work.

“I like doing cartoons and the mad writing was always there,” Joe tells me over an afternoon chat. “I had the idea for this book for a long time but some pieces needed ‘dickying up’ first. It has a lot of light-hearted fluffy stuff along with a few sharp digs here and there.”

I ask which humorists tickled Joe’s imagination in his formative years. “Initially it was the Dadaists,” he replies. “I remember the first book I read of surrealist verse. It wasn’t witty per se, but it was full of off the wall daft stuff that nobody else wrote by people like Jean Arp and Vicente Huidobro. There were a few other German writers who are no longer popular that I liked but I think most of my mad humour comes from having lived in Ireland.”

Puns comprise quite a few of the gags in the book and while many are ‘puntastic’ others are shamelessly groan-inducing – though that is the sine-qua-non of pun-based quips. “That is quite true,” Joe agrees. “Some of them are painful and blatantly corny and others are pithy and sharp.”

Handsomely produced by Artisan House, and beautifully designed by Annika Weber of Annikdesign, Buying Yak Milk In Gurtymadden will be launched by cartoonist Tom Mathews at 4pm this Saturday [September 21] at the Festival Gallery in the Station House Hotel, Clifden. Joe also has an exhibition of his work at the same venue running from September 19 to 29. The book is also available in Charlie Byrne’s here in Galway and there will be an official Galway city launch during the Cartoon Festival in November.