AUGUST IN Galway is usually a quiet spell, arts-wise, as folk wind down or bale out after the hectic festival season. However, city arts aficionados this month can look forward to a vibrant new exhibition by Tom Mathews.

Who’s Afraid of Virginia Plain opens at the Town Hall Theatre bar this Saturday [August 10] at 4pm. The suite of paintings features the eponymous Virginia, a cartoon ‘protagonista’, whose christening, but not conception, derives from Roxy Music’s classic 1972 single ‘Virginia Plain’. Over an amiable afternoon chat, Mathews outlined how his personal Virginia Plain was conceived and evolved.

“I just came up with her as I was doodling one day and I felt she looked interesting and slowly she emerged,” he begins. “She was quite different in the early days; she has now taken on some of the qualities of the original Betty Boop – a little girl with a spotty dress. Big-eyed characters are one of her sources. But she developed; I have more or less figured her out now. 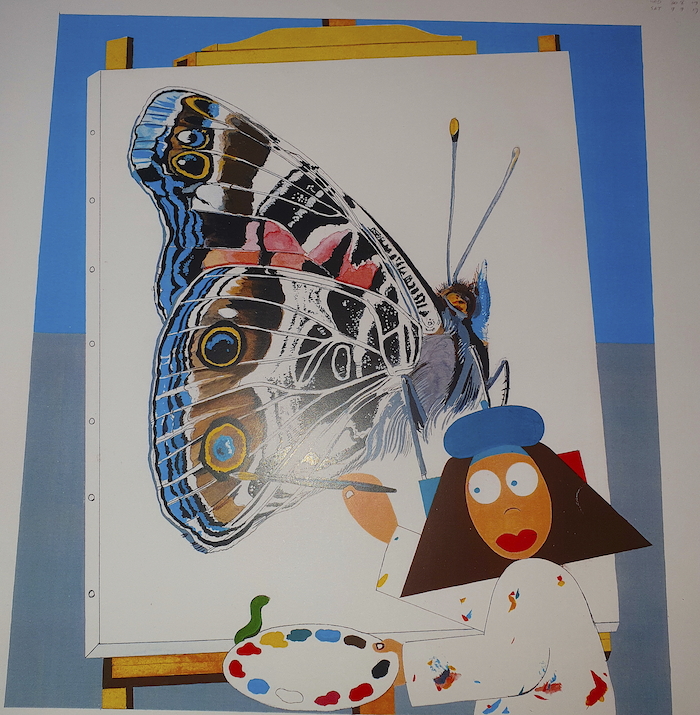 "She obeys visual rules; she usually has a top with three stripes and a red and a blue ribbon. I have worked out her hair geometrically; all these sorts of things come along as you experiment. I had a terrible problem when I painted her in profile because I had no idea what she looked like and that took me a few days but it worked out. After doing a few paintings of her I was trying to think of a name and suddenly, by synchronicity, on the radio there came that song, as if Bryan Ferry was replying to my posed question.”

Tom wryly explains why he was not too worried about copyright trespass issues regarding his use of the ‘Virginia Plain’ name; “Bryan Ferry himself took the name for the song directly from a brand of cigarettes so, while I had initial fears he might come after me for breach of copyright, I realised he had done the same thing himself with the title.”

'I already have ideas for five other paintings featuring Virginia, but there are a lot of references in the Roxy Music song to movies and personalities that could easily be incorporated into a painting. I may do that for the next Virginia Plain exhibition'

Having previously explored the heroine of Lewis Carroll’s Alice In Wonderland in acclaimed exhibitions, Mathews readily notes a kinship between his Virginia and Alice; “There is a connection between girls and surrealism, specifically girls of a pre-pubertal age,” he observes. “I see it in Dorothy in Wizard of Oz, Wendy in Peter Pan; in Bunuel’s Viridiana there is a girl very like Alice, and you have Zazie dans le Metro, in which Zazie is 10, and so on. It is there for some reason; I suppose it is like the Jungian anima which sees the creative force as a small girl.”

The paintings in the show proffer a freewheeling set of cultural allusions, wittily and colourfully filtered through a variety of Virginia-centred compositions. The iconic imagery of the film A Clockwork Orange and Pink Floyd’s album Dark Side of the Moon, feature alongside famous cartoon cat Sylvester and Egypt’s pyramids and sphinx. 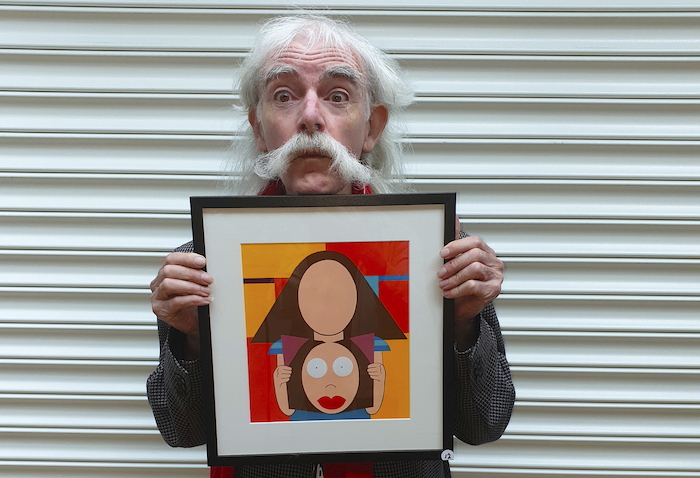 Several paintings feature a lively visual interplay between the ‘cartoony’ Virginia and skilfully rendered reproductions of iconic paintings such as Picasso’s 'Weeping Woman' and Munch’s 'The Scream'. “It is to sort of prove to myself that is not all just flat illustration,” Mathews declares. “I like the contrast between the two styles and I like to feel that somebody buying one of the painterly works is getting two for the price of one; you’re getting a Picasso and a Mathews as it were! Painting that Picasso was a nightmare, it took me four days. My veneration for Picasso went up another notch when I realised he had done the damn thing on his own out of nowhere.”

The paintings in the show are gouaches and Tom explains that choice; “Gouache is a very quick drying medium; you don’t need the stink of turpentine that you have with oils. The fact that it dries means you can keep working on the picture the next day and it is almost as correctible as oil because even if you put a black mark down you can wipe it out and paint a colour over it - though it takes a while to learn how to do that.”

Given that none of his Virginia Plain paintings to date actually references the Roxy Music song I conclude our interview by asking Tom might he venture a work or two in this vein in the future? “Now that you mention it, that is a good idea,” he states. “I already have ideas for five other paintings featuring Virginia, but there are a lot of references in the song to movies and personalities that could easily be incorporated into a painting. I may do that for the next Virginia Plain exhibition.”

While Tom’s Virginia Plain looks like having a future artistic life, Galway art lovers can enjoy this current collection at the Town Hall for the next month.