RUNNING ALL this week at NUI Galway’s O’Donoghue Centre is Floating, a swirling, surging, colour-filled rush of an exhibition by Finbar McHugh, as part of the Baboró International Arts Festival for Children.

In Floating, Finbar has created a series of abstract paintings exploring his inner world of thoughts, emotions, and feelings, brought to life in stunning splashes of energetic colour. He describes painting as his meditation, when he feels completely present and connected, when his creative energy flows. This series was painted outdoors, in nature, the place where Finbar feels most at home.

When Finbar [pictured below with Aislinn Ó hEocha, executive artistic director of Baboró] sat with me to talk about the show I began by asking in what way did devising work for Baboró, where most of the viewers will be children, influence the exhibition? “In terms of the display itself the pieces are hung at all different levels, so there is no line for adult viewing, it is for everyone’s viewing,” he replies. “There are big circles and little circles up and down the display boards which is also great for getting adults to come down to a child’s level. 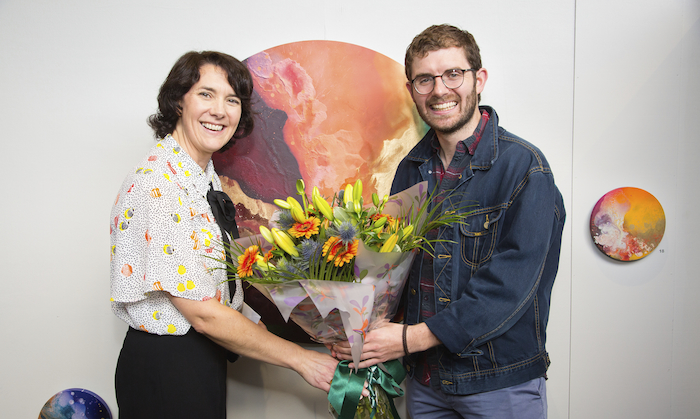 "The work itself is very much about tapping into that childlike creativity where you allow yourself to express without limitations or all the rules that you’ve learned in life. Yes you need to have a skill set but also to allow yourself to create and that’s what children automatically do. As they get older they learn to conform more with expectations and rules but in earlier years they just do it and they are delighted with themselves and so they should be. You can learn a skill set but creativity is a whole other way of expressing yourself.

"I have a similar background to that because I did graphic design and learned the rules about how to visually communicate. I can paint something perfectly but that’s work, to express yourself is the opposite, so I always look at design as working toward an expected result, to know its value, and hen you’re creating a painting you have to allow yourself to create without knowing the value until you’ve done it.” 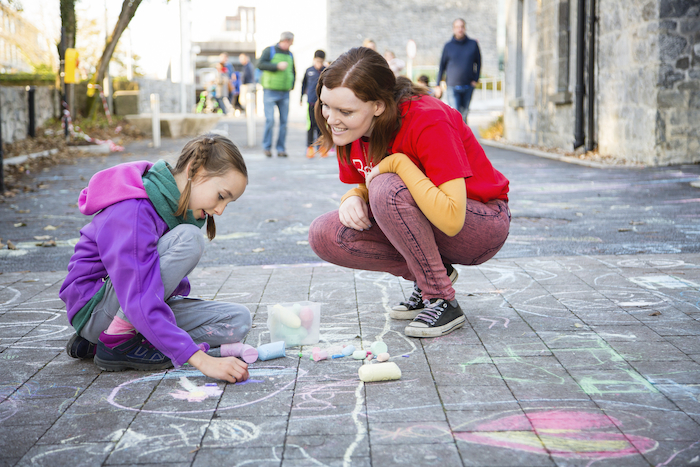 The paintings were made al fresco, yet they are not conventional landscapes or seascapes. Finbar explains the link between location and what goes on the canvas. “The paintings were all done outside, a lot of them down at the beach on Silver Strand," he says. "All the work is born out of presence; not thinking but responding to the moment. When you’re in nature you’re much more connected to yourself, there is less distraction and you’re present in that. I love taking art into nature and just watching and observing, because that’s one of the ways that we can learn. To take the creative process into that environment was another step where I allowed myself to be in it and responding to what was going on like wind, sun, rain and how they affect you as well.”

'Do you ever daydream? You can be off in a cloud of your own. You can see that with kids all the time'

That all the paintings are circular is part of Finbar’s scheme for the show. “It has an element of playfulness,” he declares. “It’s fun because I can’t paint with intention in a circle because there is no top or bottom so you have to let go and go with the flow. When we were talking about what we could do with the show the idea was to create work in response to how children create, that process of allowing yourself to create something. By doing circles it felt much more playful. Straightaway there are no rules. I was up until three in the morning trying to figure out which way to hang them – for the next show they’ll be on spinners! I’ve decided to hang them in a particular way for this show but they could be tilted any way; it’s just for this moment they are displayed in this particular placement.” 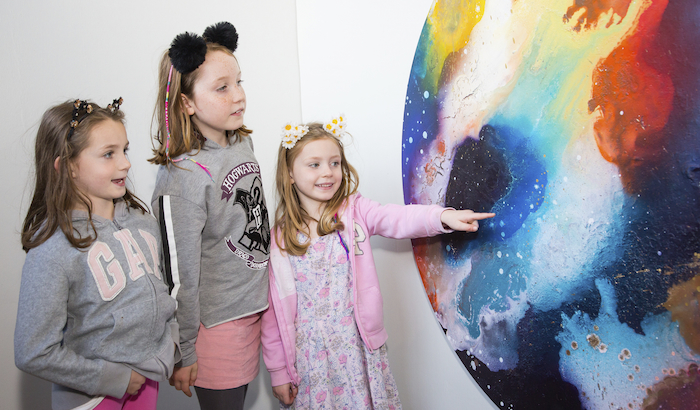 Throughout the week of Floating, Finbar is also conducting workshops with children who come to see the show. “The workshops will entail bringing kids in and first off seeing how they respond to the work, hearing their thoughts and ideas about it, and then talking to them about it and its theme of Floating," he says. "Do you ever daydream? You can be off in a cloud of your own. You can see that with kids all the time when they are not there, they’re off in a dream and I’d call that floating when you’ve left your body and gone somewhere else.

"The workshops are all based on this experience and teasing out where do you go then and I tell them that these paintings are images of those places that I go. I do a lot of meditation which entails becoming aware of where you go, so the workshop will be a mindfulness exercise beginning with breathing exercises – and kids are actually easier to work with than adults because they have fewer limiting belief systems. It lets them discover and express their own inner knowing and understanding, so the workshops are a blend of meditation and art appreciation.”