ONE OF the highlights of next week’s Baboró International Arts Festival for Children will be when acclaimed Australian theatre company, Slingsby, brings to the stage its award-winning adaptation of Oscar Wilde’s story The Young King.

The story tells how a young goatherd is discovered to be heir to the kingdom and treasures are laid at his feet, but at what cost to others? The beautiful and tender language of Oscar Wilde joins the intimate and magical world of Slingsby to bring audiences on a wondrous journey to a land of challenging choices and rich rewards.

The Young King is directed by Andy Packer, who founded Slingsby in 2007 and remains its artistic director. He spoke with me about the show ahead of its Baboró dates. I began by asking about the artistic vision which impelled him to establish the company and how it has evolved since its formation.

“When I formed Slingsby I wanted to create theatre for an audience that included everyone aged from eight and up,” Packer tells me. “I wanted to make work that was emotionally complex enough for an adult audience as well as being surprising and moving enough for a young audience. I was very inspired by companies I had seen in Denmark and Holland making theatre for young audiences. There was no work like that in Australia at the time and that’s what I was exploring.

The Young King from Slingsby on Vimeo.

"In the past 11 years we have made eight shows. We hone in on the fact that we tell coming of age or getting-of-wisdom stories because they are tales of worth for people at any stage in their lives, whether they are looking back or forward. Children tend to look forward and think they are going to have autonomy and freedom when they are adults. Adults look back on their childhood and think that is when they had freedom. In the middle between those stages is where we like to operate as a theatre company.”

The Young King fits that Slingsby template of a getting-of-wisdom story which was one of the things that drew the company to do it. “We were looking around for a story that had that coming of age element, and had that transformation in it, and had enough at stake that we would be really interested in investigating it and it would speak to children and adults as well. We read about 100 stories trying to find one that really spoke to us and then our composer, Quincy Grant, brought The Young King along because he remembered reading it when he was young. It’s something of a forgotten story of Wilde’s; it’s not as well known as ones like The Happy Prince. We liked it and then we commissioned Nicki Bloom to write the adaptation for us.” 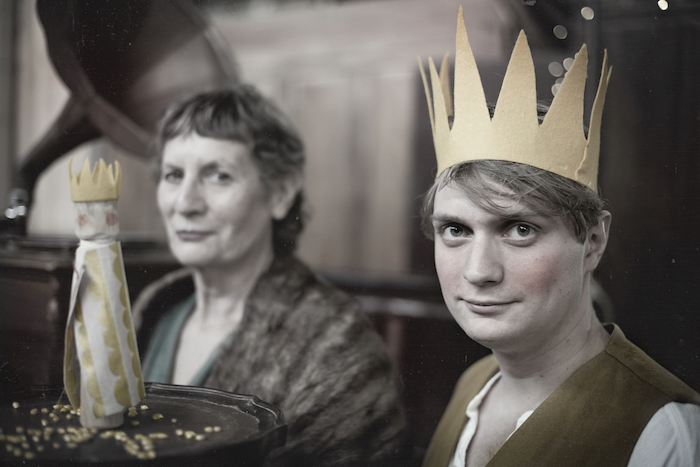 The story ends on a note of intriguing ambiguity; when the young king finally rejects the luxuries of his royalty, the villagers do not respond how he expects. ‘Out of the luxury of the rich cometh the life of the poor,’ he is told by an angry subject. ‘To toil for a hard master is bitter, but to have no master to toil for is more bitter still.’ “In the story the young king has an epiphany and rejects the trappings of being king," says Packer. "People may go ‘That’s great’ but the fact people go ‘Hang on, what do we do then?’ is what really interested us. We don’t like to make didactic, morally driven, points in our shows, we are more interested in asking questions and this story does really make you ponder on that and think about it.”

The Young King is an immersive production where audiences become involved in the action. “We are interested in creating intimacy in the theatre and how we make the most of that rare opportunity that live performing art has which is to share the space with our audience,” Packer declares. “We have the audience there with us in the room and we like to get them in the story-telling in some respects but we also realise that some people just like to sit and watch the show, so we find that balance between inviting people in and letting them experience it hands-on while also providing an opportunity for a communal viewing experience.”

The Young King is performed by Tim Overton in the title role and Jacqy Phillips as other characters in the story. Music is by Quincy Grant. It plays from Friday, October 19 to Sunday 21 at the Black Box. Details of show times and tickets from www.baboro.ie