Jason Manford had a realisation. His origins are as a working class lad from Salford in the north of England, the child born to an Irish emigrant and English family, but his children, thanks to their dad’s success as a comedian, actor, writer, singer, and broadcaster, means they are very much middle class.

That confusion and realisation, where Jason himself is no longer sure which class he belongs to, has produced a new term for those who fall in-between the established socio-economic stratum, as well as the title of the show he brings to the Black Box Theatre later this month - Muddle Class.

“The show is about my background, and where I’m from, and the realisation my kids will have a different upbringing to you,” Jason tells me during our Friday morning conversation. “It makes me wonder, if I was a teenager now, would I even be their friend? How many things would I have in common with them? They did a taster session for horse riding recently. That was never an option when I was a kid. I thought when I first started this show, it was just me, but I’ve found it’s a thing a lot of people feel, that they’re raising kids who are posher then them. People’s lives have moved on and that change is very funny. 'Muddle class' is where the two classes meet - the kind of person who eats olives while watching Jeremy Kyle.” 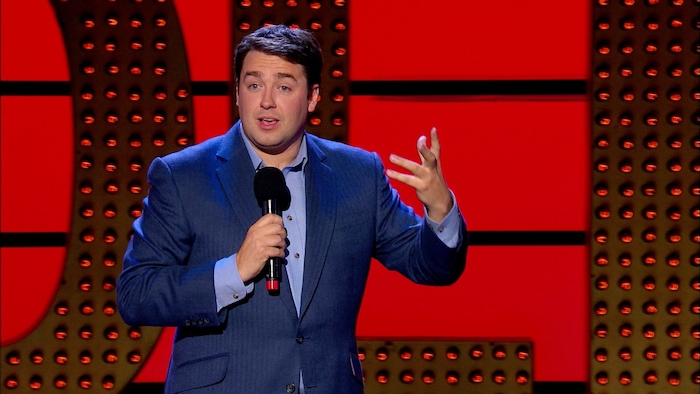 While Jason may be ‘muddle class’, when it comes to his comedy he makes no apologies for being ‘middle of the road’. In July this year, in response to a review in The Guardian, he declared he was “not ‘stubbornly’ ‘middle-of-the-road’”, but was proudly so. “I like it here” he said.

“I always read reviews, but don’t common on them," he says. "You get a thick skin as a comic, but I felt I had to reply to that one. There was a bit of snobbishness towards the audience. I felt they were having a pop at my audience. Just because you’re edgy or pushing boundaries doesn’t make you better. Look at the numbers, a sitcom that gets a one and half million viewers is called a cult hit. Mrs Brown’s Boys gets 10 million views and gets slagged off. That’s what amazed me about that review. You can’t have the edge without the middle. I’ve worked with Jimmy Carr and Jim Jeffries. The edgy comics all know you need people like me, Michael McIntyre, and Peter Kay propping up the edge."

Jason’s Irish connections come through his grandparents, Ryans from Dublin, who moved to Manchester in the 1950s. The showbiz and performing gene was certainly inherited from that side of the family. “They were brilliant singers,” says Jason. “There were eleven children, one of them was my mum. They were all in an Irish showband playing folk and country and western in pubs loads of weekends.”

Jason is continuing that family tradition of performance, alongside his sister, who is a musician, and two uncles, one of whom is a Neil Diamond tribute act, and the other, a Michale Bubelé impersonator.

“There was no shock when I wanted to do media and performance in university,” he says. “It wasn’t as if we were from a long line of accountants, and ‘You’ve got to go into the family firm!’. The Manfords are all quite straight and ‘normal’. The Ryans are a hodge lodge of crazy characters. There’d be afternoons in pubs that would stretch into the early hours of the following morning, there’d be fights at christenings. It gave us all a sense of performance, and it fed into my comedy. The first gigs I did were me telling stories about my family and that was funny enough.” 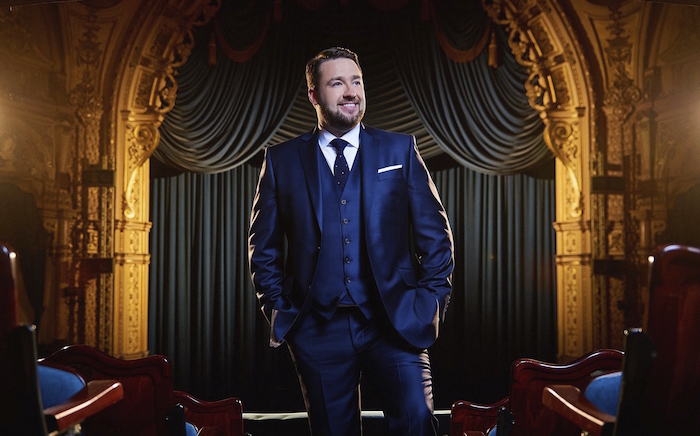 Jason shares a few stories with me about the kind of scrapes his family got up to in the 1970s, starting with ‘liberating’ a cooker from a neighbours house. “Any chance of getting something free you’d take, as you couldn’t afford a new cooker,” he says. “I remember having to go with my dad and get the cooker out of this guy's house, and we took some shoes as well. He was a friend of my mum, and he’d died, so it was ‘Oh great, let’s go get all this stuff.’ Well, it wasn’t great. It was a free for all. That’s what it was like back then!

'I sold 120 more records than Shania Twain - bet that didn’t impress her much!'

“I remember one Christmas, we couldn’t afford a tree. Dad thought it was a waste of money to get a tree that year. I remember being woken up at two o’clock by my two uncles, who were hammered drunk, throwing stones at the window to let them in the house. I looked out the window and they were out in the garden, holding up an eight foot tall conifer. They’d just been in someone’s garden and robbed it! It was too tall to get into the house, so part of it had to be cut off, and I could see my dad out in the garden, sweeping up the trail of pine needles and soil leading out of the house, giving away who nicked the tree!”

Aside from comedy, Jason’s other great passion is musicals, and he enjoyed some success last year with his debut album, A Different Stage, featuring songs from Les Miserables, Chess, Sunset Boulevard, and The King and I. There was also a nod to his Irish heritage with a version of ‘Carrickfergus’.

“It wasn’t something I begged for,” he says of the album’s genesis. “The marketing people saw ‘he’s popular, he likes musicals’, but I was excited to do it, it was fun, it was an absolute dream, what songs to pick, what versions to do, and standing in front of a 60 piece orchestra…ahh!…there’s no sound like it. It got amazing reviews, got into the Top 10, and sold 120 more records than Shania Twain - bet that didn’t impress her much! I’m glad I’m not in the music industry though. I don’t know how, in this era of Spotify, they make money, unless they’re Ed Sheeran. I’ve not seen a cheque yet.”

Jason has appeared in the musicals Chitty Chitty Bang Bang, The Producers, and Sweeney Todd, and last month it was announced he would star in a major new production of Guys and Dolls at the Royal Albert Hall, playing Nathan Detroit, a man with a very particular gambling problem. 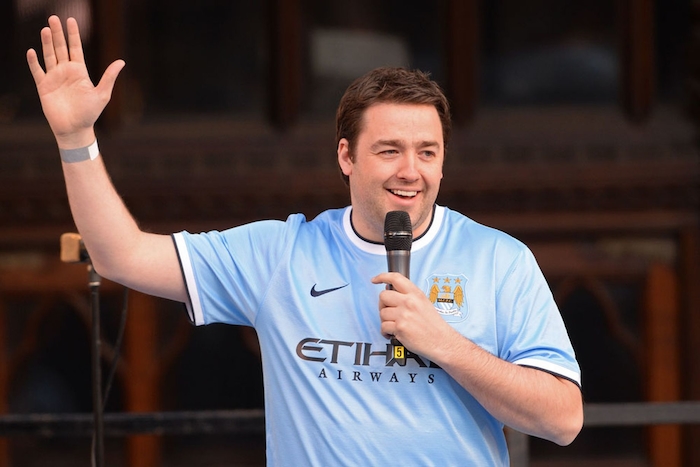 “He doesn’t necessarily have a gambling problem,” says Jason, “he organises games for people with gambling problems. His problem is that he can’t find anywhere to hold a game as the police keep moving him on. I watched the film again recently and I’m thinking, ‘I’m going to be playing the role Frank Sinatra did in that film!’ Sometimes when dipping my toe into this world, I get this sense, 'Am I here only because I’m on the telly?' That’s part of it, but if you can’t do it you get found out pretty quick. Getting re-booked is a pretty good sign.”

Jason is long time Manchester City supporter. For many years, that was an unhappy furrow to plough, but since Pep Guardiola become manager, the blue half of Manchester has never known an era like it. “You can look at football and think, it’s soap opera and ’Oh money is ruining the game’," he says, "but when it happens to your club you think, ‘I’ll take it!’, and you think back to the days when you were beaten by Swindon Town on a Tuesday night in winter, and you’d be hiding your Man City shirt under your coat, or else you wouldn’t wear it, because you’d be be picked on at school because your team was crap. United are having a slump now, so that adds to it.”