Scottish artist David Mach is sure to supply a ‘wow factor’ to this year’s Galway International Arts Festival with his large scale installation, Rock’n’Roll, at the festival gallery in Market Street.

Comprising more than 20 tons of newspaper, plus a car, a boat, and a caravan, Mach’s ebullient creation will explode through the gallery space like a torrent of paper lava, engulfing and hoisting aloft the objects in its wake.

When I call to the gallery to meet Mach I find him waist deep in a large crater gouged out of the floor surrounded by the assorted vehicles he will deploy in the piece. Taking a break from his labour, he sat down to talk about his art and began by describing how his vision was shaped by his Fife hometown and his colourful parents.

“My dad was an atheist and my mum a kind of hedge better, she wasn’t quite sure what to believe in,” he begins. “She had a dramatic start to life, both my parents did. They were both very dramatic and eccentric people. My mum’s mother was Irish and lived in Maryhill in Glasgow. They sold her as a baby to the couple I knew as my granny and granddad. Her mum had too many kids when my mum came along, and my granny and granddad wanted a wee girl so they bought her, it was like a natural social service.

"My mother once turned to me years later and said ‘David, God doesn’t love me’ and I was sitting there thinking ‘What?’ She was a dramatic woman; she was very depressed whereas my dad was incredibly positive. He had an incredible life also. He was Polish and was marched off to a Siberian labour camp as a teenager and spent two years there. During the war he went to Arnhem as a paratrooper. His whole family were in concentration camps, some of them fought on the Russian front. He went through all that and never batted an eyelid. So I was stuck between those two poles of my father being very positive and my mother being very negative. My mother was fantastic in many ways, both of them gave me an incredible education and I had such luck having those great parents.”

I ask David where his artistic impulse came from. “I always had an impulse toward making things, ever since I was a little kid,” he replies. “When I was five or six we used to go down and dam the little stream running through the golf course using rocks the same size as we were ourselves so my pals were my first artistic assistants helping me move these giant rocks into the burn. I didn’t know then I was making something but that was definitely a creative impulse. 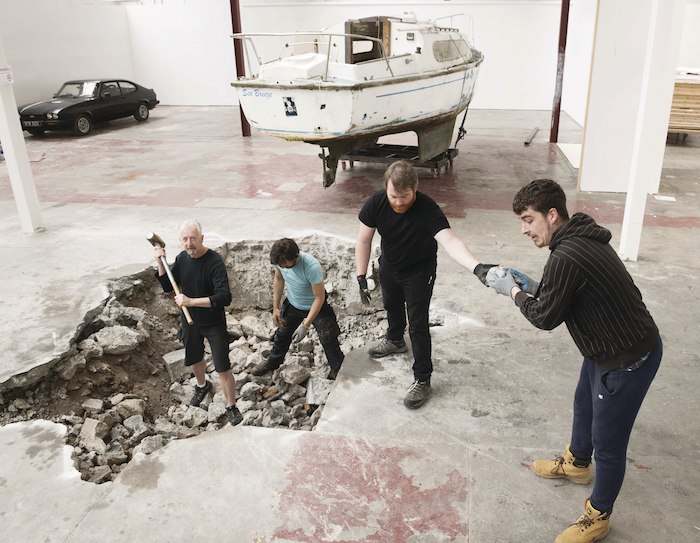 "My mum and dad’s sense of logic was nuts and that helped me too. My mother was obsessed with music; they never talked about art but musically we would listen to everything from gypsy violinists to classical symphonies to Frank Sinatra. They both read voraciously as well and they’d argue like nutters all the time, it was a great, lively family to grow up in. If you looked at them from outside you would think she was just an ordinary housewife and we were a normal family but it was totally different, I had a useful and exciting upbringing.

"I guess my instinct to be an artist was there already. I was good at drawing and was encouraged to do that but I never thought I’d be an artist, but my art teacher said I should go to art college and he forced me to put a portfolio together and then when I went to college I thought ‘Thank God, I’ve found something I love doing’.”

Mach explains how his Fife childhood informed the large scale artworks for which he has become world famous. “I can go back to moving that rock as a kid in the burn because that is where you are learning that stuff," he says. "I actually failed applied mechanics in school and my engineering drawing classes. My drawings were beautiful but my calculations were always terrible. Fife was heavily industrial when I was growing up; everywhere you looked there were people beavering away, beating things on anvils or making oilrigs. 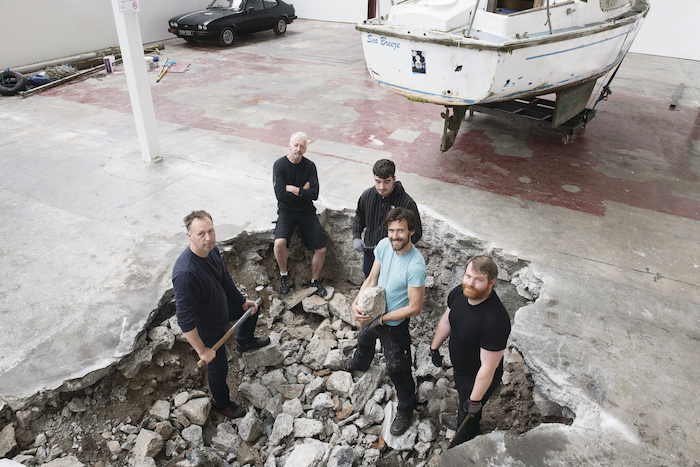 "I grew up across the road from a petrol station, there was a power station out the back, we were next to a brickworks, through the night you’d hear the rumbling of these furnaces and off to the left there were the docks and you’d see these colossal huge buoys and these were all places I worked as a student and young man. You were surrounded by this industrial endeavour that also came with a kind of ‘f**k you’ hard attitude – you’d be walking down the street and someone would give you a skelp across the lug because they thought you looked lazy. I absorbed all that completely, it comes up through the soles of your feet and you drink it with the water, you breathe it in with the air and you can’t escape it. I loved all that striving and the lengths everybody went to to produce something.

'Actually the Ford Capri is exciting – nobody who sees it wants to talk about the art just the Capri!'

I’d go to art college and see a bit of metal sculpture that was maybe four feet by five feet and they’d be saying ‘Look how big that is’ but that morning before leaving home to come into college I’d have seen two trucks combining 80 feet long passing my house with a part of an oil rig to lift up in the air and attach to the rest of the thing and that really was colossal whereas the sculpture was just some interesting wee thing.

"I was disappointed by art college people’s idea of colossal and I guess I wanted to address that. I did one piece with 160 tons of newspaper but I was only half finished and asked for another 265 tons, but they wouldn’t give it to me because they’d have to haul all this stuff out of the gallery when I was finished. If you’re a painter or a potter in the art world you don’t have these kinds of problems but I like that excess and extravagance when it seems like madness, that is the place that I exist comfortably.” 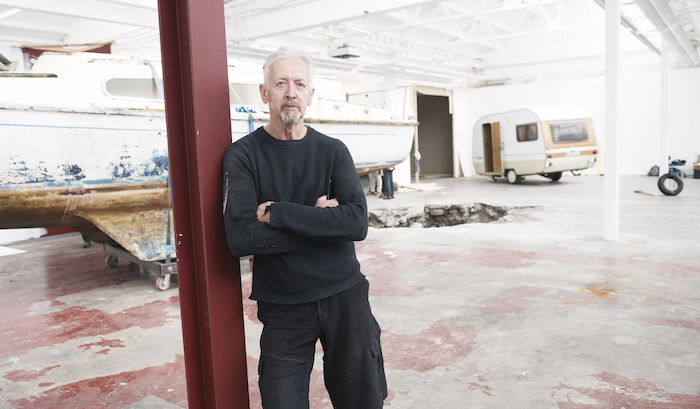 Mach describes his Rock’n’Roll installation; “I’ve made 30 or 40 of these pieces over the years across the world and I try to use different objects every time. Cars are a common thing, you can get a car into a gallery without too much bother; getting a boat in is exciting. Actually the Ford Capri is exciting – nobody who sees it wants to talk about the art just the Capri! We need an entry point for the sculpture; sometimes my pieces will come out of a car or a wall or a painting, these will be the entry points where the newspaper can flood into the space.

"I’ve always wanted to put a hole in a gallery floor and finally I am getting to do that in Galway. I am wildly excited about that. The newspapers will pour out of the hole and look as if they have lifted up the car and the boat and the caravan and are moving them around. So there is violence to the energy of it; somebody said to me it is macho but I don’t think it is at all because the work with the newspapers is very sexy, very curvaceous, and sinewy.

"Its form tells you a hell of a lot about what’s going on and about itself and when it hits an object that form changes so there is a relationship between those two things and how they exist in the space. There’ll also be 60 or 70 small collages that relate to the main piece that I’ll construct from images taken from comics. I am keen to get those up as well.”