Combining the qualifications and skill-sets of both GP and herbalist, and with a passion for knowledge and healing, Dr Dilis Clare, owner of Dr Clare Apothecary on Sea Road, is a woman of enviable energy, commitment, and wisdom.

Over an engrossing afternoon chat she outlined her journey through the worlds of mainstream and herbal medicines and shared some of the insights and passions which have defined her career to date.

“I don’t come from a medical family,” Clare begins, as we sit chatting in one of the consulting rooms in the apothecary. “I was born in Dublin, one of 11 kids and went on to study medicine in UCD. I then went to England for a lot of my hospital training, as many of us did at that time. There was a great meritocracy in the UK health system then and I did loads of very interesting things – community medicine, family planning and balint which is like psychotherapy but specific to the doctor/patient relationship, a way of understanding the doctor patient relationship to make it more beneficial to the patient. I always found interesting people to work with; I didn’t just follow a scheme. I was always questioning things and the status quo.”

Clare qualified as a doctor in 1980 and started working as a GP but after a while dissatisfaction began to set in; “I found it all a bit soulless; if you are empathetic or at all sensitive in medicine, it can be tough. After each six month job I’d have to take three months off. You’d see heartbreaking things back then; someone could be told in the middle of a ward round they had only six months to live. Some doctors seemed able to brush that off and just move on to the next bed, but I was thinking ‘This can’t be right!’

“For a few years I felt like I fit in, but gradually I’d sit there after surgery and wait as my printer would spit out half a boxful of repeat prescriptions. If you were to go through every one to find when the patient had been reviewed last you’d be there for three days – seriously! There were other frustrations as well; you’d refer someone to a specialist but they’d have to wait months for an appointment. The drugs were the main thing I was unhappy with. I was in charge of a large apartment complex for people with learning disabilities and they were all on prescribed drugs for 15 or 20 years. The system never worked because the whole thing was creaking.”

Though Clare voiced her concerns she found no support from the medical establishment. “I promised myself when I first qualified that if I ever felt I was harming people more than helping them that I would never be afraid to throw in the towel,” she declares. “I came through the era of Valium; when I was an undergraduate doctors were saying there were no side effects or dependence issues with Valium but half of Dublin was taking it; all of Foxrock, all of Ballymun and how can that be right? I voiced my opinion about that and was totally squashed down. Medicine had the same culture as the church in silencing people who disagreed with it. It was the same with HRT, I said that’s not right; when you see what oestrogen does in physiology, for people to be taking that for 10 or 15 years cannot possibly be without consequences, and I feel the same thing now about biologics, it’s the new kid on the block for auto-immune disease but come back to me in 10 years’ time; I know I will be right.”

'I describe what I do as people doing a diploma on their own health and addressing questions like what’s happening in your life that means your body is complaining? A symptom is telling you to pay attention to something that’s wrong'

Clare’s disillusion led to her exploring the world of herbal medicine; “I love gardening and then I found a course in herbal medicine. At that time they were giving doctors educational grants. Talk about serendipity and synchronicity; the first herbal medicine science degree in the UK was just around the corner from my general practice in north London and I got a grant to do it! It’s like it was meant to happen. That said, I went into herbalism with a sceptical mind to start with. This is our indigenous medicine; the nettles, the meadowsweet, the valerian, the hawthorn, burdock, thyme, sage – these are the herbs I use every day.

"I loved all of that and the connection with gardening and I loved the poetry and the history of it. Yet I didn’t believe any of it to start with; it was just lovely stories and nice language, but then my patients were constantly coming back and saying ‘I’m better’. I had a patient a few weeks ago with ulcerative colitis who wasn’t responding to the first line of treatment, the next step was to go on biologics but within three months of herbal treatment she was coming back on no medication at all. Herbs can be that powerful.”

Having acquired her qualification in herbal medicine in 1999, Dilis opened her Apothecary on Sea Road and moved into her present premises, across the road from her first establishment, in 2005. From here she and her staff offer a wide array of herbal medicines, teas, tinctures and oils, as well as classes and clinics.

She points out that the patient has to bring something to the herb as well as the herb treating the patient; “Some people find it a bit frustrating because it doesn’t deliver that quick whack of improvement you can get from drugs. It’s about thinking it through for yourself. I describe what I do as people doing a diploma on their own health and addressing questions like who are you, what’s happening in your life that means your body is complaining? A symptom is your friend – it’s telling you to pay attention to something that’s wrong and you can often answer that query yourself when you look at your situation. You have to make a little bit of effort.” 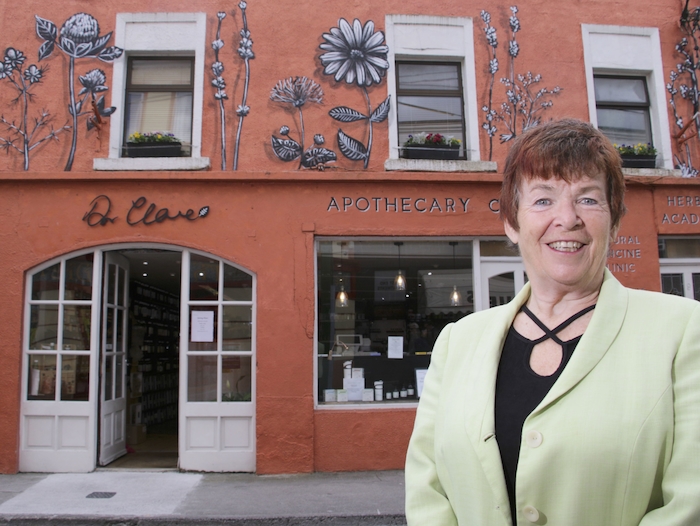 I ask how she would describe the current status of herbalism vis a vis mainstream medicine; “The problem is people say ‘where is the research’ to which I’d say ‘where is the money?’” Clare replies. “If you have 0.02 per cent of the funding you’ll have the same amount of the research, it’s as simple as that. Of the research that has been done in herbal medicine, 98 per cent of it validates the traditional use of herbal medicines or their constituents. Of all the so-called alternative or complementary medicines it has the strongest evidence base but it is also the closest competition to pharma medicine because they have come from the same root and branch. There is a fear-mongering by pharma companies about herbs.”

Clare is currently working on a book which will be published next year by Aeon Books and in which she sets out her observations in depth. “The issue the book addresses is that many people are concerned not about the use of pharma but its misuse. I have no complaint about its proper use and as a doctor I often put people on medication. The over-medication of pharma is what I object to. If people get in trouble with their health they don’t have any credible system of medicine to turn to so my book makes the case for an authoritative critique offering a role for herbal medicine for people who are ill, based on such evidence as we have for both pharma and herbal medicine as collaborative medicine. I see GPs and herbalists who have a lot in common and if doctors realised what herbal medicine has to offer more of them would train in that field. I think they’d be happy to work in collaboration with a herbalist in the same way they work in collaboration with a psychiatrist.”

Dr Clare is an eloquent spokesperson on the benefits of herbal remedies, a teacher of her accumulated skills and wisdom, and a versatile, sensitive, and imaginative healer for her patients. Galway is lucky to have her.