NEXT THURSDAY, March 9 at 6pm, the Galway City Library will host the launch of what is sure to be one of the best Irish novels of this year - Ithaca by Galway writer Alan McMonagle, and published by Picador.

Wildly imaginative and fizzing with narrative vitality, it is both laugh-out-loud funny and heart-wrenchingly sad. It is a novel with a big, beating heart, and an unforgettable central character - 11-year-old Jason Lowry.

Ithaca unfolds in the summer of 2009 in an un-named Irish midlands town where Jason is preoccupied with thoughts of the da he has never known. Meantime, his vodka-swilling, swings-from-the-hip ma, Jacinta, is busy entertaining her latest boyfriend and indulging her fondness for joyriding in the nearest available car. Fed up with his ma's antics, Jason strikes up a fast friendship with the enigmatic girl who hangs out at the Swamp. Together, they conjure exotic adventure, heroic lifestyles, and a host of improbable 'mock-ups' of Jason's elusive da.

Fuelling her risk-taking nature, the girl goads, nudges, and prods Jason deeper into unsafe territory, until what began as innocent pretence soon threatens to tailspin into danger and very real harm. Blending helter-skelter comedy and quiet desperation, Ithaca is the darkly comic and utterly compelling story of how far a lonely boy will go to secure his mother's love.

McMonagle was born in Sligo, grew up in Longford, and lives in Knocknacarra. “My parents were both doing BAs in UCG, as it then was, when I was born” he tells me over a morning coffee. "My mum is from Sligo and my dad from Longford. As soon as my dad finished college he got a job teaching in St Mel’s in Longford, his alma mater so we’ve been in Longford since I was a toddler.

"I started to write stories when I was about six or seven. We had this end-of-row house and a long, wild garden with bindweed and billowing nettles and there was a back lane and a ditch and, to me, this vast wasteland that banked up onto the railway tracks. This became a fertile stamping ground for my imagination at an early age and I was penning mini sagas and epic adventures.”

McMonagle has previously published two acclaimed collections of short stories - Liar Liar (Wordsonthestreet, 2008 ) and Psychotic Episodes (Arlen House 2013 ). It was a fateful trip to the Dromineer Literary Festival that planted the seeds for Ithaca, his debut novel; “After Psychotic Episodes came out I was invited to Dromineer in October 2013. There I met with Donal Ryan, Paul Lynch, and Julian Gough and they threw down the gauntlet to me. I had just read a short story there, whereas they all had novels to schlep around. I remember Paul saying to me ‘You have the chops Alan, come on! Have a go at the novel!’ So I came home and decided I would get stuck in and I cleared aside 2014 and just went for the novel.” 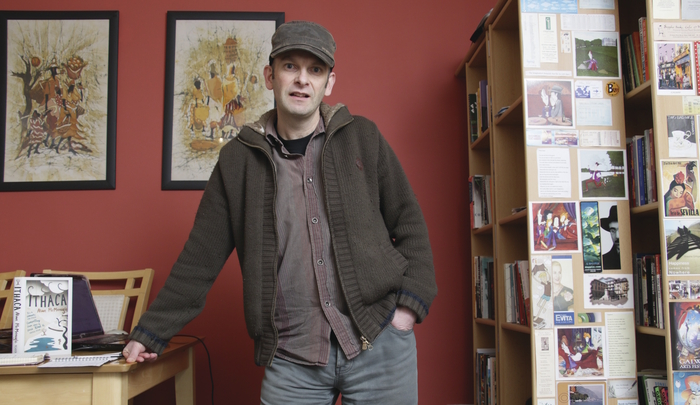 A recurrent strand in both Ithaca and McMonagle’s stories is his love of classic Hollywood movies. He reveals that he was practically reared on watching vintage films; “I remember my dad would just plonk me down, when I was no age, in front of our old TV and we’d watch those classic gangster films from the 1930s, James Cagney, Humphrey Bogart, Edward G Robinson – I used to love saying that name, I still do! Films like Angels With Dirty Faces, The Roaring Twenties, White Heat. I was enthralled instantly; I loved the dialogue and the tough talking.”

I ask what books he enjoyed as a child; “Reading-wise I went through Treasure Island, Tom Sawyer, and from that to Huckleberry Finn - that was a big book for me at the time. I had a compendium of Greek myths that I read from start to finish I don’t know how many times. It wasn’t that I was reading widely but if I found a book I liked I went back to it time and time again. Looking back, it feels like I’d lived a rich life by the time I reached 12.”

McMonagle’s path into writing was somewhat wayward; “I did a B Comm in UCG, do not ask me why! I spent most of my twenties drifting really. I’d take a job, earn some money, and travel a little bit. I had some over-the-counter jobs, I packed shelves, sold greeting cards, I spent some time on London building sites, though you wouldn’t think it to look at me. In my late twenties I started again thinking about writing and having lengthy conversations about it with myself late into the night. I was almost fighting with myself over it but eventually, in 2006, I applied to the MA in writing in NUIG.”

In Ithaca, Jason and the girl he meets at the Swamp imagine far away places. This is another familiar trope from McMonagle’s stories and in his own life he’s done quite a bit of travelling; “I spent a year in Australia and travelled all around there; the wide open spaces just put a spell on me. From there I hitch-hiked up and down the two islands of New Zealand – this was shortly before The Lord of the Rings trilogy was filmed there so I saw all those mythical locations before they were committed to celluloid. Mount Ngauruhoe becomes Mount Doom in the film and that was all fuelling my imagination.

"I also travelled from Havana to Buenos Aires and I’ve been all over Uganda, Namibia, the sand-dunes of the Nib desert and all these various hinterlands and landscapes, albeit fleetingly alluded to in the book, in a way do come from the places I’ve seen – though I’ve never been to Greece actually. When I was starting back into writing I did some pieces of travel journalism and had a few published which was an early encouragement.”

McMonagle’s Jason will draw comparisons with Francie Brady of The Butcher Boy - both are marginalised and unstable. But whereas Francie becomes violent, the only harm Jason ever does is to himself and he remains an essentially benign character.

“That’s getting to the heart of what the book is about,” McMonagle states. “Jason is on a voyage of self-discovery and even though he is looking far away all the time to places of escape he is very much on an inner journey so it’s a very personal story as his level of awareness develops. He literally wouldn’t harm a fly –there’s a scene where he’s in the back yard and is speculating what he might do to the various rodents and insects that he sees but he doesn’t actually raise a fist in anger against any of them. The only person he’s a danger to is himself.” 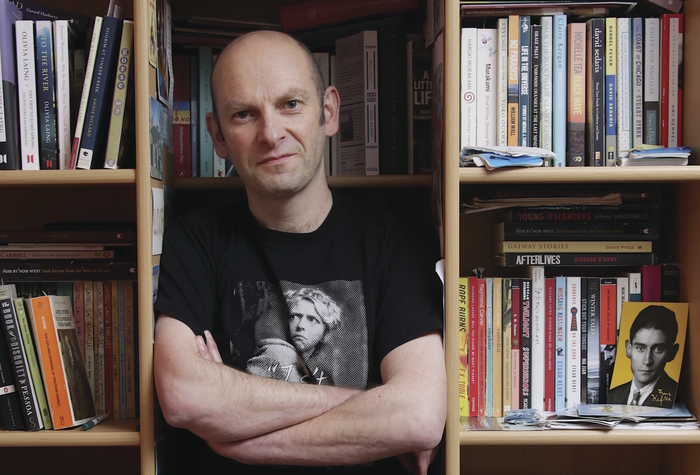 Jason’s mum, Jacinta, would not win any awards for parenting but, pursued equally by creditors and lusting suitors, there is something heroic in the way she faces her life’s many slings and arrows.

“She’s a complicated character,” McMonagle admits. “She’s flawed, she’s neglectful of Jason, but there is a fearlessness to her and a spiritedness that, as a writer, I came to admire. Her age is important; it’s almost her 30th birthday so she is still quite young and probably still has her own wishes and dreams and, by extension, her own disappointments and frustrations. She’s lashing out in the only way she knows how.”

The child’s-eye view of proceedings and the fractured family unit of Ithaca are elements also found in several of McMonagle’s stories; “I like the child’s point of view because you can come at things from an angle and have a playfulness or unreliability as a narrator,” he explains. “As regards the absence of a parental figure, the setting of Ithaca is important. It’s after the Celtic Tiger has crashed and it’s like there was an absence of guidance at a national level economically, politically, spiritually, and so on, and I brought that down to a personal level. I was aware that there were familiar patterns and themes and motifs that I was revisiting in the stories and I felt there was one all-encompassing story that might get all that out of my system so all that fed into the novel.”