THE WORLD premieres of two plays - Furniture by Sonya Kelly and Shelter by Cristín Kehoe - will be presented by Druid Theatre Company as part of this year's Galway International Arts Festival.

Earlier this week, both writers sat down with me to talk about their work and the joy of seeing it staged by Druid. Kelly’s Furniture comprises three short pieces, all of which revolve around a piece of furniture. All three are also funny and insightful.

“I wrote the first draft of Furniture in the summer of 2016 while on a residency at the Irish Cultural Centre in Paris,” Kelly [pictured with director Cathal Cleary below] tells me. “I was invited to an event in the Irish embassy and there was an Eileen Grey chair there, I leant in to look at it whereupon somebody told me not to touch it; that was the trigger for the play. I went home that night and wrote the first act.

"A married couple are in a gallery and the trigger for the collapse of their relationship is when the husband tells his wife not to touch something she had no intention of touching. It’s an index of their greater value system, it is a conduit for a clash of values and that Pandora’s Box moment where there is no coming back from something that has been said. Everything ravels out of it. I then took that idea and applied it to two more scenarios, two women who are moving in together and an elderly ailing uncle and his estranged nephew. In all three plays an item of furniture enables a conversation that is either heroic or tragic.” 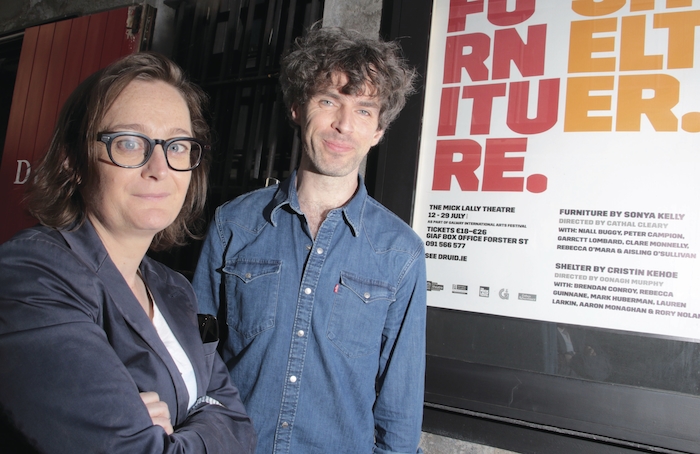 An actor and comedienne as well as being a playwright, Kelly’s solo show The Wheelchair On My Face won a Fringe First Award at Edinburgh while How To Keep An Alien was named Best Production at the 2014 Dublin Fringe Festival.

“When we furnish our home we mark our territory and a huge underlying theme of the play is about physical territory and emotional territory,” Kelly observes of Furniture. “We decorate our territories with furniture. The furniture itself doesn’t know it exists, sometimes it travels on without us and we don’t know. I love the idea as well of taking something that seems like an innocuous subject and then drilling in as far as I can go to connect the micro and the macro and to see how far I could push the subject to be the star of the play.”

'In 1916 the men in Boland’s Mills were tired and hungry and didn’t know what they’d be doing the next day. My characters in Shelter are in a similar situation'

Cristín Kehoe [pictured below with Garry Hynes] has previously had plays performed at Trinity’s Players Theatre and the Galway Fringe Festival though Shelter can be viewed as her full professional writing debut. It unfolds in a disused Dublin warehouse where a motley group of friends from society’s margins hang out and reflect on their lives’ struggles and joys. Like Kelly’s play, Kehoe’s combines lively humour and sharp insight. 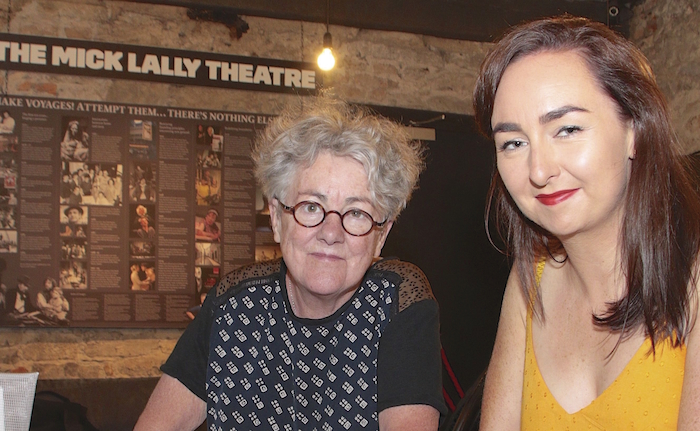 “I was studying the MA in playwriting at the Lir Academy which is opposite Boland’s Mills, so I’d see that every day and decided I wanted to write about that, and also about homelessness,” she tells me. “I didn’t want it to be issue-driven but to show a community of people who are friends and offer each other support. It’s a snapshot of a world that if you weren’t part of it you probably would not understand it. My initial idea was to have a play in two halves, one set in 1916 and the other in 2016 with the same actors playing the characters from each era.

'Lines you thought about alone for ages are now coming out of actors’ mouths. That always amazes me at first readings'

"In 1916 the men in Boland’s Mills were tired and hungry and didn’t know what they’d be doing the next day. My characters in Shelter are in a similar situation and the play comments on how far we have come in a hundred years. When Sonya was talking about marking out territory what really strikes me about the similarities between our plays is that idea of territory. That site in Dublin has being bought by a big multinational company and it is the start of what’s happening in Shelter so you don’t have spaces for these people in the play to go to.”

Both Furniture and Shelter were initially given rehearsed readings as Druid Debuts. Kelly and Kehoe explain how that contributed to their plays’ development. “When Druid rang and said they wanted to workshop the script and do a showcase reading in GIAF my feeling was ‘game on!’” Kelly declares. “It’s a call I always wanted to get; the company get over 200 scripts a year and only two are chosen for the Debuts. Once I got the call I went straight back to the script and worked and worked at it, especially the last section which I knew wasn’t right. The Debuts have a great following as well, they sell out in a couple of hours. I remember being here with the cast and there were questions, questions, questions being asked of the script and my brain felt so frazzled!” 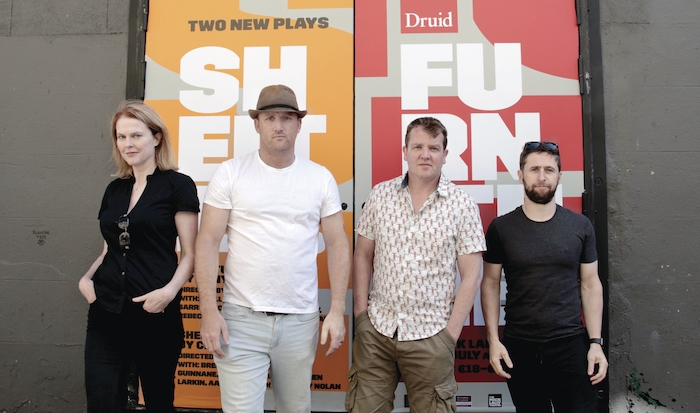 “That’s right!” Kehoe agrees. “The process is very interrogative but it is great. It’s amazing to have the workshop, with actors who have really invested in what you have written and they ask you questions that you’ve lived in your own head for so long and you wonder how did they know that about the character. When you spend a lot of time on a script you can be kind of crazy and it is such a relief to get them out!”

“Lines you thought about alone for ages are now coming out of actors’ mouths. That always amazes me at first readings,” Kelly adds. “For the first 10 minutes of a reading I hear nothing I am just watching the actors speak these lines!”

Druid presents the world premieres of Culture and Furniture as part of a programme of new Irish writing (July 12 to 29 ) at Galway International Arts Festival 2018. See www.druid.ie