IT IS now less than a fortnight until the opening night of this year’s Renmore Panto, Beauty and The Beast, and tickets are flying out of the Town Hall box office like hot mince pies.

Scripted as ever by ebullient Panto Dame Peter Kennedy, and directed by the surefooted pairing of Brian and Seán Power, this 39th Renmore Panto is all set to serve up yet another seasonal feast of madcap and melodic merriment and mayhem. The villainess in this year’s rollercoaster tale is Wicked Witch Evileena, played by Renmore – and Galway - newcomer Ellie Davis, who has just recently arrived on these shores from New Hampshire.

Ellie grew up in 'The Granite State', performing theatre and circus arts with various companies such as the Flying Gravity Circus, the Raylynmor Opera Company, and in school at Smith College. She currently teaches at the Galway Community Circus, and has just performed in the Macnas Halloween parade. Ellie has heard of this strange phenomenon of the Irish Christmas pantomime, but this is her first time performing in one.

“My mother was an actress and a mime and circus teacher and my father was an actor and circus clown and teacher,” she tells me over a morning phone chat as I ask when the performing bug first bit for her. “They used to joke that some kids run away to join the circus but if I wanted to rebel I’d have to run away to law school or something like that, but as it happened I loved theatre and circus. My mom ran a circus programme at the school I went to. That’s how I learned most of my skills. They then started summer camps where I went on to teach as well. And there would be a couple of times each year where there would be a play put on in school and they were always my favourite times of the year.” 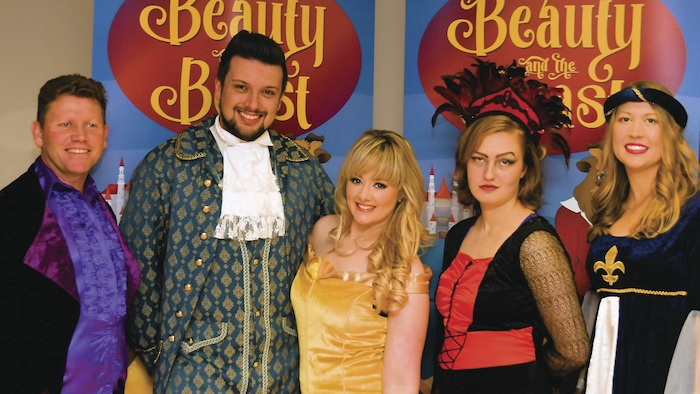 In recent years Galway International Arts Festival has often hosted visits from Australian circus companies which attests to how vibrant the artform is in that country. How popular is it in the US? “Circus arts are growing quickly in the US,” she tells me. “That’s especially true of social circus and youth circus which is not only about the performances but also giving young people positive experiences and a sense of community and somewhere they can fit in outside of sports and competitions. The US is still behind mainland Europe in recognizing circus as a valid artform but it is gaining ground in that regard.”

Ellie goes on to tell me how she came to Galway; “I studied in Glasgow and I really loved it and I play Irish and Scottish fiddle and I knew I wanted to come back to this part of the world at some point, though I didn’t quite know when or where or how. After I graduated from college I kept hearing about Galway; some friend would ask had I ever been here and then tell me it would be a great place for me.

"I also knew a couple of people who’d worked for Galway Community Circus and they were telling me how great it was as well, so last winter I came over here for a visit to see a friend and did an interview with director Ulla Hokkanen, the director of Galway Community Circus. Their ethos and approach to teaching is very close to my own so I gave them my CV and said I’d love to come here and they said ‘Yes’, and I moved here at the end of August and it is the best decision I ever made!”

Ellie thus barely had her bags unpacked before she found herself cast in Renmore Panto’s Beauty and The Beast in the featured role of Wicked Witch Evileena. How has she been finding her intro to the world of panto so far in rehearsals? “It’s really fun,” she enthuses. “The first time I ever saw a panto was last winter when I was visiting a friend in Wexford who was in one, and I saw their dress rehearsal and saw straightaway how it is very different from your traditional play where the audience only clap at the end and are quiet up until then.

"The rehearsals for Beauty and The Beast have been really fun, there’s so much goofing around that goes on in a pantomime! I’m getting really excited to see what it will be like in performance. People have been telling me how, when the villain comes out onstage, it is just a wall of sound as all the kids and audience get into that interaction. Then you have actors being able to ad-lib on the night and it is all such a wild romp and everybody goofing around onstage. It’s been great fun and I am really excited to see how it all works out with the chorus and the audience and whole experience in performance.”

I ask Ellie to describe her witchy panto baddie, Evileena; “Like any good villain she has been wronged in life so pretty much everything she does is driven by revenge. She is quick to get angry so you don’t want to annoy her or she’ll quickly put a curse or spell on you. I spend a lot of time swooping around cackling while everything seems to be going to my plan. So she spends a lot of time trying to get her way and right this horrendous wrong that was done to her but, needless to say, things don’t necessarily work out the way that she thinks they are going to!”

Ellie is also looking forward to welcoming the Davis clan to Galway from New Hampshire to see her cackle and swoop her way through Beauty and The Beast. “My family will be coming over in a week’s time and they’ll be staying to see the show. They will be there on opening night to view this wild Irish tradition. They have never been to Ireland before so that will be exciting for them.”