SHE HAS played the piano dangling high from a crane in Sãu Paolo; she has played it while being pulled by a car past the canals of Amsterdam; but never let these distract from the fact that Daria van den Bercken is one of the most outstanding young classical pianists at work today.

Daria was born and raised in Utrecht in The Netherlands, “a beautiful, friendly, gorgeous city with medieval roots,” she tells me. “My mother always said you cannot become a bad person if you grow up amidst such beauty.” She describes herself as a “typical free spirited and direct Dutch type”. Via her mother and grandmother, she also has Russian roots of which she is immensely proud. “In Russia I feel a deep sense of my own being and heritage,” she says. “It’s difficult to explain…”

Indeed both sides of the family would stimulate and nurture a passion for music within Daria. “My grandmother would ship many Soviet records on her trips to us and vice versa,” she says. “My older sister became a cellist, and we both went to a choir school from the age of eight, but my earliest musical memories are from when I was five. My parents bought a heavy German oak piano and on my sixth birthday I had my first lesson with the piano teacher across the street. It all went very organically, and I just committed straight away to the piano.”

Her passion for the instrument eventually lead to her studying in the Indiana University Jacobs School of Music, and at the Amsterdam Conservatory; her winning the Dutch Classical Talent Award in 2006 and 2008, as a soloist and a chamber musician; and the prestigious Amsterdam Prize in 2012. She has since performed with the Rotterdam Philharmonic Orchestra and conductors Yannick Nézet-Séguin, Shi-Yeon Sung, and JoAnn Falletta, and the Arnhem Philharmonic Orchestra, while earlier this year she made her debut with the Orchestre Philharmonique de Radio France.

This month Daria will perform works by Chopin, Mozart, Debussy, Stravinsky, Scarlatti, and Handel at a Music For Galway concert, entitled The Piano Has Been Dancing. Daria has received considerable acclaim for her renditions of Mozart and Galway will hear her play his Sonata in A K 331 ‘alla Turca’ - and it is a piece with special significance for her. “It is the first Mozart piece I played when I was 10,” she says. “I just had a new teacher, and with this piece she made me realise how phrasing actually goes in Mozart. I remember the chills it sent on my back: I loved the music so much!”

However it is Handel who Daria will probably most look forward to playing. Over the last few years she has become a great enthusiast, and also evangelist, for his works (she will play his Suite in Dm 428 in Galway ) believing him to be one of most under-rated and under appreciated of major composers.

“Handel woke me up a few years ago,” she says. “It was the revelation of music you had never heard before…I mean everybody has that - you hear something for the first time and are completely compelled and smitten. Here I was, as a professional pianist, who knows the repertoire, but suddenly I haerd something which was so great and new to me. It felt like a present from heaven: the music is great to dive into, which I did right away.”

In performance, a classical musician reads the score for a specific piece, unlike say, a jazz musician, or a blues or rock guitarist, they cannot improvise from it, or play around with it. So where is the room for a classical artist to add her personality and spirit? 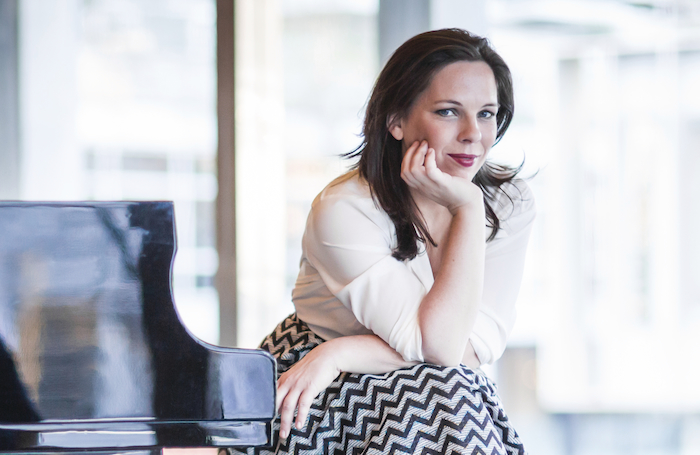 “That is a good question as it touches the essence of why I am a classical musician,” Daria replies. “A first response is that it depends on which music you play: baroque music demands an improvisational freedom from the musician, but also a certain taste: they ask that you add trills, ornaments and variations to your own taste to personalise the score. Whereas a composer like Debussy or Bartok asks monomanically for every detail to play the way he wrote it.

“The greatness of all this music is that it cannot be played if you do not put your heart and self into it in the first place. It demands understanding of the score, time, composer, but in the end that is only a little part. There has been a moment you started to love that music, and if you perform all the knowledge, love, performance skills, the wish to show your audience this music, and listening to the projection into the hall, that satisfies me more than anything.”

And few classical musicians have ever performed the classical repertoire quite the way she has, take the by now legendary performances in São Paulo (being hoisted high into air via pulley, crane, and ropes ) and Amsterdam (being towed through the streets behind a car ), all while playing the piano.

What was going through Daria’s mind as she floated above the crowds in São Paulo - how could she concentrate on her playing and not be worried she might fall off? “I only played difficult pieces, fugues, virtuosic stuff, to just stay focused on the keyboard,” she says. “I did it four times in one night and loved the response, but I’ll never, never do it again! Also, every composer should be approached differently. Brahms’ music, for instance, is way to intimate too be played like that outside.”

And so back to family and they impact they have had on Daria, the individual, and Daria, the musician. In a previous interview she said: “My sister once shouted out that I am like an ox who just keeps on bumping against the door to make it through it to be able to go on." Is that Daria’s approach to her art, career, and life?

“Not to music, but it is to my career,” she says. “And about determination in life - I just gave birth to a daughter, who will be five months old when I am in Galway. I am way more relaxed now than before she was born, but I have also got many new musical plans because of her! She inspires me. And I will probably stay very determined to make those happen as well.”

Daria van den Bercken plays a concert presented by Music for Galway, sponsored by KPMG, in the Emily Anderson Concert Hall, NUI Galway, on Tuesday November 21 at 8pm. Tickets are €20/18/16/6 via www.musicforgalway.ie, 091 - 705962, or O’Maille’s Original House of Style, Shop Street.