He will play the role of a silent man in an opera at the Galway International Arts Festival. He will appear as an IRA volunteer determined to break out of the Maze prison in the Galway Film Fleadh. He is an essential part of the Druid Ensemble team of actors. Yet Aaron Monaghan admits acting was something he came into “at the very last minute”.

Aaron - well known in Galway from his performances with Druid in Waiting for Godot, The Cripple Of Inismaan, DruidSynge, and DruidMurphy - plays the lead role in The Second Violinist by Enda Walsh and Donnacha Dennehy as part of GIAF 17. He will also appear alongside Tom Vaughan Lawlor in Maze, directed by Stephen Burke, at next week’s Fleadh.

An outstanding, superb, actor, it seems strange he might not have gone down this path at all - originally he planned to become an architect. “I didn’t know it was possible to be an actor,” Aaron tells me during our Wednesday afternoon interview. “No one in my family had anything to do with it, but you know the saying, ‘Acting is the shy man’s revenge’.”

Aaron was born in Cavan in 1980 into a large family, and admits he was “always the quiet one”. “For a long time I was the youngest,” he says. “Then there is a gap of 12 years between me and my youngest sister, and soon after she was born my parents started fostering. So it was a house where there were a lot of adults, it was a busy house with everyone talking, so I was left to my own designs. Mum always said I was so quiet she never knew where I was. I’d be reading a book or out in the garden imagining scenarios or re-enacting episodes from TV shows. That’s the only way I can understand how I later got into acting. Also, when I went to college, I was suddenly asked to talk and explain my point of view, and that was challenging and exciting. But generally, I’m quite a quiet person.” 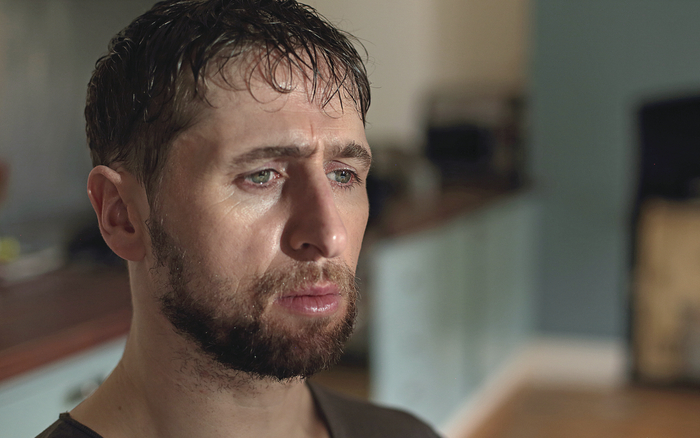 Architecture’s loss is theatre’s gain, and Aaron will grace the stage of the Black Box Theatre for The Second Violinist. He admits performing in an opera is “quite a big departure”, but also a challenge he is up for.

“I’m not familiar with opera. I don’t pretend to understand it,” he says, “but when I got the call for the part, and Landmark Productions said they had been thinking of me for it, I saw it as a chance to do something completely different, and to scare the life out of me.”

While he will be surrounded by such singers as Sharon Carty, and musicians of the calibre of the Crash Ensemble, Aaron’s role will be a completely silent one. He outlines just who this ‘second violinist’ is:

“He is the second violinist in an orchestra, and in life is he also ‘second fiddle’,” says Aaron. “His life is falling apart. There’s this question of violence that hangs over the character; he’s obsessed with online platforms; his marriage is failing; he’s falling behind in his music career. Throughout, Enda Walsh and his team play with all manner of digital technology - there are all these people on the phone to him, leaving messages for him, and it all builds into a crescendo where the darkness is revealed. And throughout, there is an opera happening around him. He’s aware of these singers and he is trying to control it. The question is, is this just happening in his head?”

A man stretched to breaking point then - sounds like Michael Douglas's character in Falling Down. “You know what?” says Aaron, “I was chatting to Enda and he mentioned that movie as a reference to watch, of a character under huge pressure. It’s very Enda - a character who is trying to get through the day.”

Another surprise revelation - Aaron admits that confidence is with which something he struggles. Anyone who has seen him on stage will find that hard to believe. “But I’m sure a lot of performers would feel that way,” he says. “I know a lot of actors who are hugely confident, but I know as many who struggle with it. As an actor you’re looking for that vulnerability to connect with. It’s easy to play strong roles where the character is dominant, but it’s frightening to explore the more vulnerable spaces of yourself and have your heart broken.

“I don’t have any social anxiety as such, but I do prefer my own company or when it’s just with one or two other people. I tend to avoid big crowds as you’ll question yourself too much. I feel confident on-stage though. I know I have the script learned and what I’m doing, and even if something goes wrong, I’m prepared and can play with something new happening, so for me, the stage is where I’m most confident. Real life is a little more intense.”

In recent years, Aaron has taken a number of film roles. While small, they have still brought him into contact with major stars such as Marion Cotillard, and his fellow countryman, Michael Fassbender in Assassins Creed, nd with Jackie Chan in The Foreginer - due for release in October.

“Assassins Creed was great,” he says. “It was a dream. What you learn quickly with high budget films is that they are decided on in the editing suite, and what you thought you were filming on set can come out as a completely different film on screen - an actor can end up on the cutting room floor, so if I appear in it at all I’m lucky. It was great watching Marion Coultard and Michael Fassbender, who were lovely. And there is also the money, let’s be honest here. The money is good. It helped pay for my wedding!”

Did he get to meet Jackie Chan when making The Foreigner? “I did and I had to get into a fight with him,” says Aaron, “and shoot guns and build bombs! Doing that film was really intense. I’m a huge fan of the Bond films and the director, Martin Campbell, did two of my favourite Bond films, so I was really excited to be working with him.”

On September 25 1983, 38 IRA prisoners escaped from the Maze Prison in County Antrim. It was the biggest prison escape in UK history, and is now the subject of the Irish film, Maze. “For the third film in a row, I’ll be playing an IRA man!” Aaron laughs.

“Some of the characters in the film are based on real people," he continues. "Others are a merging of a couple of different people - I’m one of those guys. We had a fantastic time doing it. I think it was the most fun I’ve had on set in any film I’ve done. Everybody got stuck in and the camaraderie on set was great. Often on set there can be politics. The stars can be kept away from the extras, but that wasn’t the case here. We were all having a laugh. During the fight scenes we lumped the heads of each other, and then afterwards we’d be asking ‘Are you alright?’ It was a brilliant experience."

Despite the fun on set, Aaron sees a serious purpose and merit to the film - that of confronting subjects which were once taboo, and conveniently ignored south of the border. “I remember having a conversation with someone from the North recently and I said something that really upset them,” Aaron recalls. “It made me realise, it’s not good enough for me to not know about it. It’s like, we in the Republic washed our hands of it and just didn’t want to know. I’m from a border county. The border is only 10 miles from my home, yet growing up I had no idea of what was happening in the North and I say that with a sense of shame, but in the last six, seven years I’ve educated myself about it, on both sides of the story, and to take account of what was happening in the North.

“There is something about the Maze. It’s a great escape story, but I feel I want to do a film where I understand what’s at stake here and not just tell a story. It’s important we investigate the relationship we have with the North a little more as we have shied away from our responsibilities about what happens across the border.”