The Galway Film Fleadh is rapidly approaching and among the gems to look out for is the world premiere of All The Wild Horses, Ivo Marloh’s terrific feature-length documentary about the Mongol Derby.

This is the longest and toughest horse race in the world. With a route based on Genghis Khan’s empire-wide network of postal depots, the 1,000 kilometre race sees riders from all over the world and all walks of life compete on a relay of semi-wild horses across 25 stations in the Mongolian wilderness. Taking over a week to complete and entailing dawn-to-dusk rides, arduous terrain and extremes of weather, this is an epic equine adventure without equal.

Marloh’s film captures all the race drama as it unfolds amid the stunning steppe landscape and Fleadh audiences will surely be drawn to the stories of the two Irish riders taking part; Donie Fahy, from Meath, and Galway’s own Richard Killoran who both came to the race with backgrounds as professional national hunt jockeys. Ahead of All The Wild Horses’ Galway premiere, Richard Killoran chatted with me about his experiences and impressions of this unique race.

I began by asking whether horses were part of his upbringing. “They were and they weren’t,” he replies. “I grew up near the Sportsground on College Road and there weren’t many horses around there and there were no jockeys in the family before me. I started going to riding school in Claregalway when I was 11 or 12 and that’s when I first got the bug for it. I used to enjoy going to the races with my father and I then went to the racing school when I was 15 and I moved England not long after that. I actually retired as a full time jockey a few years ago but I am doing some riding out at the moment.” 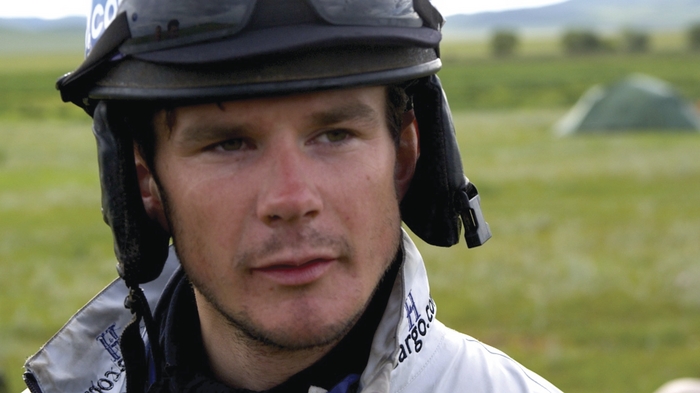 Mongol horses are small, sturdy and unruly; very different from the sleek and pampered animals Killoran [photgraphed above by Michael J Sanderson] was used to; “It was like chalk and cheese,” he agrees. “I’m used to being on a horse for four or five minutes going flat out, while here I’d be riding for 40 kilometres. The weather in wintertime there gets down to minus 40 degrees and the horses are living out in that; no rugs, no nothing, proper hardship. I remember coming back home and riding a racehorse and he stepped on a stone and got a bruise and needed treatment for a few days. These horses are going over boulders without a care, they are really tough.

“Some of the horses are fantastic they’d give their all while others had absolutely no interest. If you got the short straw with your choice of mount it could be a tough day. I remember on Day 3 of the race, Donie and I were in the middle of nowhere. The heat was pelting down, it was 30 degrees, we hadn’t eaten in six hours and all of a sudden his horse refused to move and just stood there. We didn’t know what to do. Donie ended up throwing his reins to me and I tied them to my saddle and my horse pulled his horse along. We were going at a mile an hour and I remember thinking if we got 10 more horses like this we wouldn’t be finishing the race in a month never mind a few days. Then there were other horses that would canter or gallop the whole 40km without breaking stride.”

All The Wild Horses vividly captures the vast skies and endless grassy expanse of the Steppe. I suggest to Richard it must have been a strange landscape to ride through for a westerner. “Absolutely,” he admits. “Most of the time it was quite monotonous; you’d go over a hill and be confronted with the same scene you’d been looking at for the previous few hours. You could do a full 360 degrees turn and everything looked the same. Mongolia is vast, it’s six times the size of the UK but only three million people live there and half of those are in Ulaanbaaatar, the capital. The rest are all spread out so you don’t see anybody for miles and miles.” 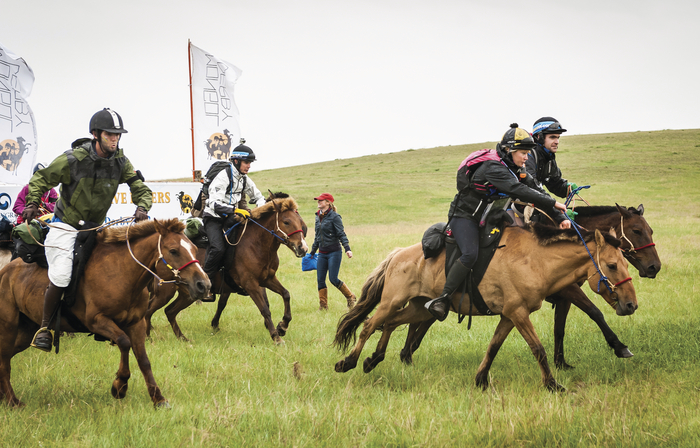 Both Killoran and Fahy entered the race intent on winning, yet the film shows them sacrificing precious time to help other riders in trouble or letting fellow competitors ride along with them. “Well with the two girls, Julie and Charlotte, who rode along with us we couldn’t beat them off so we said sure you may as well come along with us,” Killoran notes wryly.

“It helped not just for the horses’ sake – as herd animals they go better together - but also for our sanity to be able to talk with someone different for a few hours rather than just me and Donie. At one stage I did want to get away from them but then I’d be thinking it’s not a sprint it’s a marathon and there’s no harm riding along with them for a few days as long as we’re still up near the front. It was a tricky dilemma at times!”

The $13,000 derby entry fee excludes most Mongols from taking part in the race –though a Mongol did win its first running in 2009. They are largely present as herders, vets, cooks and ancillary staff.

“They are good horsemen,” Killoran observes. “I remember watching them breaking in a horse one day. They tied its legs together, one guy got on, they untied the rope and that was the horse broken in. I’d never seen anything like it. It would have been interesting to see how we’d have got on in the race against Mongolian riders - though the herdsmen might have been inclined to give them the better horses! That was a difficult issue throughout the race, asking them to recommend a horse for you. You could ask for the fastest one but he might only go fast for five kilometres and then not be able to go at all for the rest of it. I’d tend to ask for the best horse not the fastest. It is difficult picking out one you think will be the best just by looking at them, though you get an eye for it after a while.” 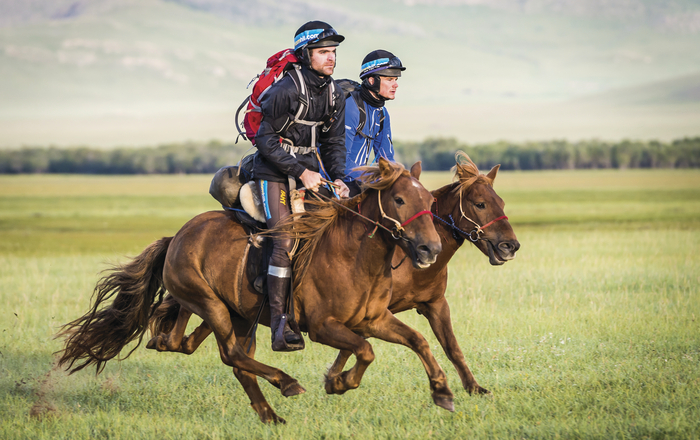 The race is not for the faint-hearted and fewer than half the riders complete the course. Injuries incurred in Richard’s race included a suspected broken neck, a broken collarbone and a punctured lung. It was also a daunting challenge to put on film, as director Ivo Marloh, who also rode in the race, recalls.

“When I was a kid I read all about Genghis Khan and it was a lifelong dream of mine to ride across the steppe. When I got into the race I decided I had to film it as well. I got a lot of the stories in the film through being on horseback and being able to stick with the riders. Mind you, I was bucked off twice by my horse and it was when I started filming because the horse sensed I was doing something different on its back. We shot 20 hours of footage altogether which we then edited down to 90 minutes.”

I ask Richard if he has stayed in contact with any of the riders he befriended in the Derby. “Well funnily enough, I’m getting married to one of them in October,” he replies nonchalantly. “Whaaaat?!” I exclaim. “Yeh, I’m marrying the American rider Erin Shanson,” Richard confirms. “She injured her knee on the second day of the race and had to withdraw but we got together and we’ll be walking up the aisle in a couple of months.”

That union will surely make for terrific fireside tales in the future as to how mam and dad first met but before then audiences can enjoy all the thrills and spills of the most daunting derby on the planet when All The Wild Horses screens at the Galway Film Fleadh (July 11 to 16 ). Screening date and time will be announced in a couple of weeks with the official launch of the Fleadh programme.