"There is joy in the woods just now/The leaves are whispers of song/And the birds make mirth on the bough/And music the whole day long." On these balmy May days, Merlin Woods certainly live up to those lines by poet Claude McKay.

Merlin comprises the largest area of woodland around Galway city and is a haven for wildlife and many species of insects and flowers, including rare orchids. As such it is an area of high conservation importance and the volunteer group Friends of Merlin Woods is at the forefront of raising public awareness of the woods and their adjoining meadows.

Last week I met group-members Caroline Stanley and Catherine Denning, who brought me for a stroll along the woods’ leafy pathways as they talked about their activities and the wood’s attractions. As we walked the fragrance of wild garlic permeated the evening air while trills of bird song sounded out from the branches overhead.

Caroline Stanley hails from Corofin and has been living in Galway for the past 25 years. She is well known as the singer with Celtic reggae troupe Big Bag of Sticks.

“I was a long time living in Doughiska before I discovered Merlin Woods and once I did I thought ‘Wow, it’s unbelievable that this place exists and nobody talks about it.’" She explains the group’s beginnings: “Friends of Merlin Woods started because of litter originally. In October 2012 a few of us set up a Facebook page to see if we could get people to come out and clear up the litter – there was a massive problem with that.

"We set up a group and 2,000 people joined within a month which showed that people wanted to know more about the woods. After that we found out about a proposed bus corridor through the woods so we set up a campaign to stop that, which is how we got into being activists and campaigning and learning about the environment. It was all accidental really!”

She fills me in on the woods’ history: “The woods were part of the Merlin Park Estate house, which was built by Charles Blake in 1812. He was a cousin of the Blakes who owned Menlo Castle. In 1876, the estate passed into the Waithman family and they owned it until the State bought it in the 1940s to build Merlin Park Hospital.

"The woods appear on the Ordnance Survey maps from the 1830s and you can see that some of the trees are well over 200 years old. You can tell it’s old by woodland flowers like wood anemone, and bluebells which show old woodland. We’re learning about it ourselves as we go along, about the different insects and species of wildlife. But we never wanted it to be just about the environment; it’s about people as well. We look at cultural things you can do in a woodland setting so we do art projects with Catherine and stuff like that.”

Originally from Mayo, Catherine Denning is an actress, storyteller, and writer who has lived in Galway for the past 11 years along with her 12-year-old daughter, Réalta. Her most recent stage appearance was during Cúirt when she turned in a powerful performance in Lorna Shaughnessy’s poetic drama, Sacrificial Wind. She reveals how she got involved with Friends of Merlin Woods:

“One day on the bus, Caroline asked me to be a fairy on a fairy walk at Doughiskea intercultural festival. As soon as I met her she started getting me involved in everything. I have to say Caroline is an absolute Trojan and has been unreal in instilling confidence in me and my own practice. I call her ‘Two-ideas-per-sentence Stanley’, she always has plenty of ideas, so we put our heads together and she assumes the producer role and it jumps off from there.”

Catherine describes a couple of the theatrical and storytelling events they have staged in the woods; “On Culture Night 2015 we had a lovely walking story-telling event based on local folk tales and history. We told one story at the castle and another at the Grandfather Tree and another one deep in the woods. Then for St Brigid’s Day I researched stories around Brigid – both the saint and the goddess - and visual artist Debbie O’Reilly made a mandala using material gathered from the woods. We invited people to bring water from their homes which was a ritual associated with Brigit and we had a sacred fire burning. We had a great turn out for that even though it was freezing cold. All of our events are family friendly as well - though sometime I’d love to do something really spooky and freak people out!”

I ask Caroline about the range of plant and animal life in the woods: “The one people love to see is the red squirrel,” she replies. “We also have fox and there may be pine martens here as well. There are badgers, lizards, sparrow-hawks, kestrels and buzzards. This is also one of Ireland’s top sites for species and numbers of butterfly. That’s because no-one is spraying any weed-killers so the whole place is wild.

"In a way the lack of management has allowed things to thrive over generations. There are a lot of precious flowers; there are six different species of orchids in the meadows. There are thousands of them, it’s an amazing array and there are some through the woodland as well. As for the trees, there are hazel, whitebeam, ash, beech, sycamore, oak and spruce. It’s such an interesting place to come and see. If you come out once you’ll want to come here all the time.”

There are still issues that Friends of Merlin Woods want to see addressed; “Trees are being cut down illegally every winter and there are continuing problems with littering and dumping,” Caroline notes. “We can keep taking the litter out but it will just keep happening because people get away with it unless the council takes action.” 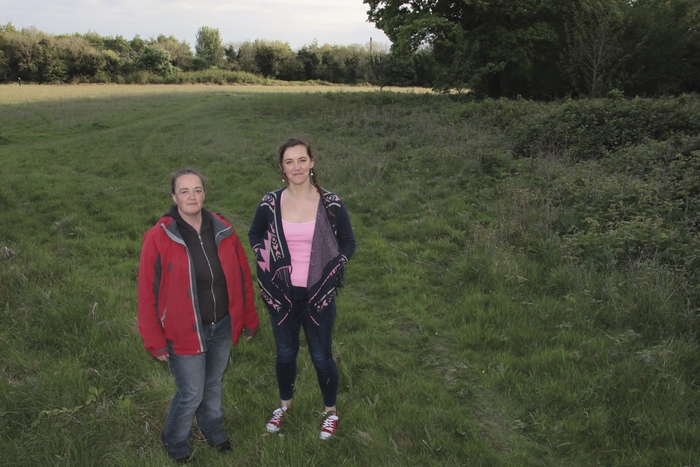 Catherine points out a dry water channel: “Galway City Council have re-routed the fresh water from here and the biodiversity has been really affected because of that. There should be a river running through the woods but there isn’t; the water is running through the storm drains at the moment. One of our aims is to get the river back. Because of urban development in the area pollution is going into the waterfall here and it stinks. I was talking to someone who used to play here as a kid and he remembers seeing otters out here, so we have already lost one species because of that and who knows how many more might have gone?”

The most pressing issue for Friends of Merlin Woods just now is their Save The Meadows campaign which is contesting the city council's decision to allow rezoning of Merlin Park meadows to build a hospice, education centre and carpark. More than 5,000 signatures have already been collected for a petition opposing this decision and one can add one’s name online at https://my.uplift.ie/petitions/save-the-meadows-merlin-park-galway

On a more upbeat note, from May 22 to May 28 is Biodiversity Week, which will feature a series of free events exploring the birds, bats and wildlife of Merlin Woods. For Sunday May 28, families are invited to spend ‘A Day in the Forest’. During the day there will be a range of activities for all ages and an Animal Magic Birds of Prey Show from 2pm. More information can be found at Friends of Merlin Woods’ Facebook page.