The opening film in this year’s Galway Film Fleadh is Song Of Granite, an absorbing and lyrical portrait of legendary sean-nós singer Joe Heaney. It is directed by Pat Collins best known for his acclaimed documentaries on Michael Hartnett, John McGahern, Frank O’Connor, Gabriel Byrne, and Tim Robinson. While Song Of Granite is a feature film, it fits seamlessly into that body of work.

Shot in black and white, the film follows Heaney from his childhood in Carna to his adult life in Glasgow and Manhattan, and his old age when he was being recorded for posterity by young music scholars. The strong thread running through all his times of both hardship and acclaim was the abiding presence and power of song. Interestingly, Collins did not start to become interested in film until his late teens;

“I grew up on a small farm outside Drimoleague in County Cork and our world was farming and Gaelic football and the grown-ups talking about politics," he says. "Cinema wasn’t a feature of my upbringing; we lived a good distance away from a cinema and I only went once before I was 10. Television would have featured more strongly, though we only had one channel then.

"I had no special interest in film until I was 17 when I moved to Cork city after finishing school. There were a few cinemas there and I started going to see a lot of films from then on. I had no big interest in reading or the arts either in my early years: though music was always big and I was always interested in history.”

While he is now based in Baltimore, it was during his 13 years living in Galway, that Collins’ burgeoning interest in film deepened; he tells me what brought him west.

“It was the summer of 1990," he recalls. "A gang of us went camping up along the west coast of Ireland and ended in Galway. I was at a personal crossroads and thinking about emigrating. The fleadh and the arts festival were on when we came to Galway and the atmosphere of the city then was totally different to any other city in Ireland. I remember going to the fleadh at 11pm one night and seeing three films in a row that were on 'til five in the morning and walking around the city afterwards.

"I moved to Galway within a few weeks. It was different to how Galway is now, it was smaller but vibrant and less corporate. I worked in the Unemployment Centre for a while and 28 per cent of Galway was unemployed back then so there was an acceptance of people being out of work. Tommy Tiernan has said the dole was a crucial part of his artistic development and I would agree with that. It gave me time to find my feet. I didn’t make my first documentary until I was 30. I did other things; I used to edit Film West for a few years in my twenties out of the Galway Film Centre. I did a foundation course in film there in the 1990s and lived in Galway from 1990 to 2003 working in GFC and the Fleadh and I then went on to making documentaries. It was a roundabout way of doing it.” 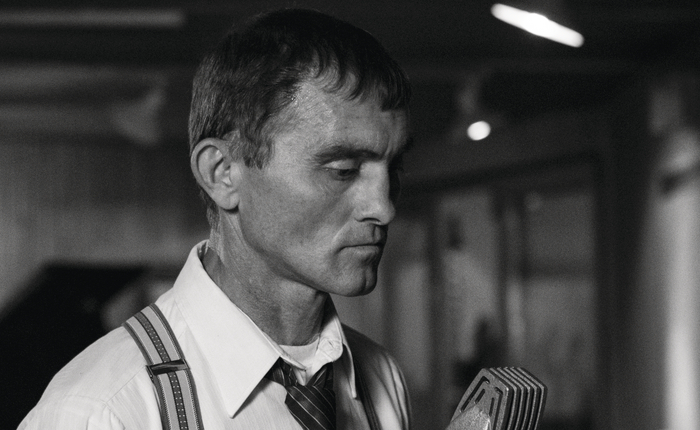 It was also during his time in Galway that Collins first became interested in Joe Heaney [played in the fiilm by sean-nós singer Míchéal Ó Confhaola, pictured above]. “It goes back to that early 1990s period and the lunchtime concerts in the arts festival. I remember seeing Steve Cooney and Seamus Begley playing in An Taibhdhearc and it blew my mind; I hadn’t heard trad music played like that and it re-orientated me towards that world. Around the same time I remember hearing Joe Heaney singing ‘Rocks of Bawn’ on the radio and I was really drawn to it.

"I bought an album of his songs and I used to sing the song myself at parties. I was always drawn to Joe and traditional singing so I felt if I was going to make a film about singing Joe Heaney would be the perfect figure to focus on. I think he was the best sean nós singer of his time and maybe ever. I am drawn to making slow films that have a meditative quality and I felt it was important to have a sean nós song in the film from start to finish, without cutting away from it, just one camera angle. I felt it was important to create the experience of listening to a singer sing a song.”

The soundscape of Song Of Granite is an integral part of the film’s fabric, whether that be hens clucking on Joe’s childhood farm or the echoing ring of his footsteps as he walks down a night-time Glasgow street. “When I started making films I wasn’t that conscious of sound but the more I made the more conscious I became,” Collins remarks. “People don’t always pay enough attention to it; sometimes it is exaggerated or overpowering whereas I much prefer when sound is there but is just part of the film.

"Creating the soundtrack for the 1930s phase of Joe Heaney it was important to have those sounds as a subtle layer. It only reflects our own experience, if you are in nature what you are looking at is one thing but what you are listening to is half the story. People sometimes just insert sound but I like to spend a lot of time working on sound, sound is important in the film. Some scenes are carried by sound; that footsteps on the street scene is about the notion of exile or loneliness.” 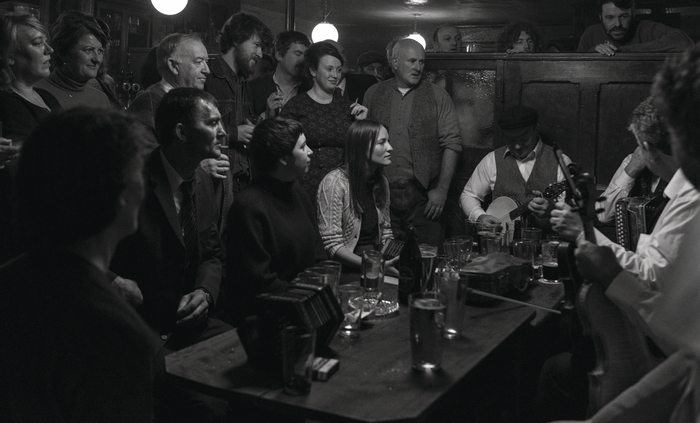 Collins’ film eschews the conventions of the Hollywood biopic and Heaney remains an isolated, somewhat mysterious, figure throughout. “Lillis O’Laoire wrote a biography of Heaney and even he’d say that he is very much unknowable,” Collins observes. “You can’t really read him. He is a mysterious artist; he said a lot about the singing but not about his personal life or his motivations. I didn’t feel I could second guess or give him reasons for being the way he was.

"I didn’t want to be making stuff up and if you show something in a film people will start reading into it and say ‘that’s the reason why he did this’. I wanted to take all that explanation out and make it about the singing, and his experience of singing and the audience’s experience of listening to the singing rather than it being a story of a person’s life. It is about him but that’s not the most important thing in some ways; if we learn more about him that could take away from the actual singing. There’s mythology there and the tradition that he comes out of.”

Heaney in his middle years is portrayed by sean nós singer Míchéal Ó Confhaola. Did Collins require him to mimic Heaney’s singing style in the film? “He didn’t base his singing on Joe at all; I didn’t want him to do that,” he replies. “Míchéal is from Rosmuc and has a very different style. He sings out from the lungs whereas Joe would be more nasal and be about the head. The important thing was listening to Míchéal who is a passionate singer and is consumed by the song, those were the qualities I was trying to get. He looked great, the way he sang and carried himself.”

There are some documentary elements woven into Song Of Granite, such as footage of Irish navvies, brief shots of Heaney himself, and an audio clip of his daughter. “That mixture of documentary material with the film stems from the fact that I started in documentaries and I like working with archive,” Collins explains. “I felt that archive could be an important part of the film and that the documentary footage of Joe Heaney could sit comfortably beside our actors playing him.”

Finally, I ask Collins about his decision to make the film in black and white. “I never thought of it as being in colour,” he declares. “I wasn’t trying to be arthouse or pretentious I just felt it had to be in black and white. I think it helps the viewer enter into that world of Joe Heaney and stay there but it’s also easier from a technical point of view to make it in black and white.”

Song Of Granite will be screened at the Town Hall on Tuesday July 11 at 7.30pm. See www.galwayfilmfleadh.com