WHAT WOULD happen if, one day, death downed tools and took a holiday? That’s the scenario at the heart of Death at Intervals, the brilliant novel by Portuguese Nobel laureate José Saramago, a theatre adaptation of which is coming to the Galway International Arts Festival.

Adapted and directed by Kellie Hughes, and performed by Olwen Fouéré and Ray Scannell, the play uses a cabaret structure to probe our complex relationship with the Grim Reaper, and present an unlikely love duet between the character Death (who is struggling to kill ) and a musician (who refuses to die ).

A former dancer, who toured the world with Riverdance, Kellie Hughes is a highly trained theatre artist with 20 years professional experience as a director, performer, and creator. She has toured extensively and her work has been seen in the UK, US, Australia, Spain, Romania, Finland, and Turkey, as well as Ireland. Death at Intervals is her third collaboration with Olwen Fouéré, following riverrun and Lessness.

“The expressive potential of the body has always interested me,” she tells me “As a kid I was interested in dance and did Riverdance about 20 years ago. Then I got very interested in the idea of physical theatre and started to pursue that. While I was with Blue Raincoat in Sligo, their director, Niall Henry, said I should do training so I went over to London and spent three years at the Ecole de Mime Corporel Dramatique.”

It was while Kellie was in London, and with a part-time job to help fund her studies, that she first met Olwen Fouéré. “I was working as an usher in the National Theatre and Olwen came there with Lessness. She did a post-show talk and I went up as a shy student and introduced myself. Then, 17 years later, that show was the second one that we worked on together.

Hughes describes her approach to adapting Death at Intervals; “What I love about Saramago is his subversive perspective on life and the way he creates these fantastic scenarios and follows them to the nth degree. With Death at Intervals he wonders what would happen if death took a holiday. When I first read the book I thought ‘This is so theatrical I’d love to do something with it’.

"The inspiration for our adaptation came from the final third of the novel which is like a love duet between death and this musician. I was also thinking about Saramago creating this novel; he is celebrating death at a point when he was pretty close to it himself – he was 82 and had had brushes with ill health. It’s like a love poem to death, saying that it is necessary. The play is ‘inspired by’ the novel rather than a direct adaptation; the character Ray plays is like a composite of Saramago and the musician from the novel. 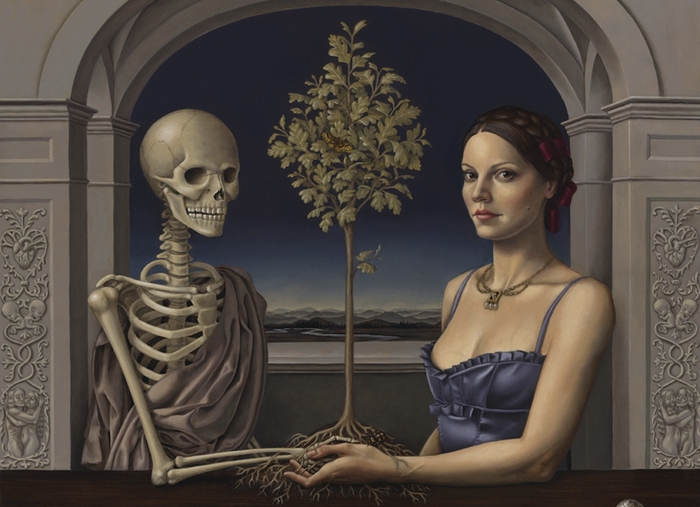 In Saramago’s story death assumes a human guise and much of its drama flows from that. “Death becomes personified as a result of taking on flesh and blood and suddenly she feels other things like unease and desire,” Kellie observes. “She’s quite an innocent being that is just learning how to become human but at the same time she is like a tiger looking at her prey.

"It’s like when you see a cat play with a mouse, there’s no evil in it. There is that kind of strangeness in this new person that is death, and who is meeting this man. She’s really interested in his ordinariness because she has never seen a human so up close and personal before, while having to deal with the difficulties that he won’t actually die as/when he should. Olwen is like an elemental force so she is perfect for the role!”

Kellie expands on the show’s cabaret structure; “The spine of the show comprises four different encounters between death and the musician. Around that spine there are different kinds of instruments. It starts off with the premise of Saramago thinking about death and creating the novel. Then you have the musician early in the morning composing and thinking about death and it’s like flights of fancy that happen as a result of that.

"That is where the cabaret element comes in so, for example, we have a piece called ‘The Death Trade’ which plays on the idea of what would happen to funeral directors and others if you did not have death in our world anymore. There is a fantastic piece which Olwen performs called ‘The Death Notice’ where she literally starts to give people notice of when they are going to die and then she’s horrified when they go off having a debauched time rather than settling their affairs.

"It is a very playful way of thinking about death rather than seeing it as this awful thing that humanity has to go through. It’s more seen as a necessary part of life and celebrating that.”

“I bought an antique grand piano to use in the performance. I wanted to put a digital piano inside it and do other various things with this piano. So I needed someone who was going to be very sensitive with this beautiful piano, who would be in love with it and whose work on it had integrity for the play and the instrument and Cillian provides that. Michael Cummins is the scenographer and it’s going to be a big collaboration between Cillian, Michael and myself in terms of what that piano does!”

Death at Intervals is a Kellie Hughes and Galway International Arts Festival co-production. It runs from Wednesday July 20 to Sunday 24 at 8pm nightly at An Taibhdhearc. There will also be a 'Backstage at the Festival' talk on July 21 (post show ). There are matinee performances, at 3pm, on Saturday and Sunday, and one preview performance, at 8pm on Tuesday 19. Tickets are €20/18. See www.giaf.ie