NEXT WEEK sees a real highpoint of the Town Hall Theatre calendar when the Abbey Theatre arrives with its invigorating new production of Sean O’Casey’s The Plough and the Stars, directed by Olivier Award winner, Sean Holmes.

Ninety years on from its contentious premiere, when the audience rioted, the Abbey Theatre takes a fresh look at this epic story of ordinary lives ripped apart by the tumult of the Easter Rising. In so doing, the Abbey invites audiences to put aside any preconceptions and look at the play with fresh eyes, to rediscover the human story, in the context of 2016, 100 years on from the events O’Casey wrote about.

In The Plough..., residents of a Dublin tenement shelter from the violence that sweeps through the city’s streets. A revolution that will shape the country’s future rages around them. The play, and this production, asks what kind of Ireland awaits them, a question that continues to resonate in our own time.

Ever since its stormy debut, The Plough and the Stars has been indelibly linked with the Abbey Theatre where it has been performed hundreds of times down the years. Yet looking back at the Plough’s history with the Abbey it is striking how quickly this provocative play, which initially outraged nationalist opinion, became a safe and familiar programming staple.

Defanged and defused it was trotted out every year as a reliable and cosy crowd-pleaser, and with pretty much the same personnel every time. To take one example; Maureen Delaney played Bessie Burgess in the play’s 1926 premiere and was still playing the role 13 years later. It was then taken over by Eileen Crowe whose Bessies ran from 1942 to 1965.

In recent decades Abbey productions have sought to blow away the thick coating of cobwebs that had accrued on O’Casey’s drama, none more so perhaps than Garry Hynes’ 1991 production which, with its shaven-headed cast and stark design, provoked uproar among critics, yet still drew full houses. 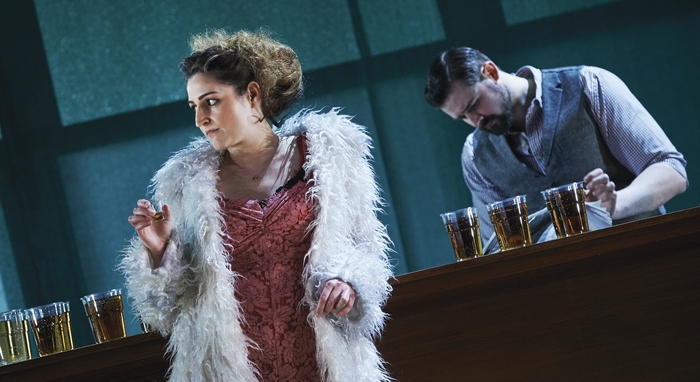 Now, amid the Rising Centenary, director Sean Holmes takes up the Plough baton for this much-anticipated new production. Holmes (whose grandfather came from Tipperary ) is the artistic director of the Lyric Hammersmith and has also directed for blue-chip companies like the RSC, Old Vic, and Royal Court.

Holmes has set out to release the play into a 21st century context, many of the costumes are contemporary and the design motifs evoke the Dublin of today as much as that of 1916.

Describing his approach to the play and its period Holmes states; “Everyone has a different opinion about 1916, it’s the perfect event to project your own personal viewpoint onto, if you’re a committed socialist you can read it like that, if you’re a feminist, a conservative, and so on. My opinion on 1916 is irrelevant because I am presenting Sean O’Casey’s play but what I think O’Casey is reacting to are easy pieties and mythologizing.

"The important thing about The Plough is that it’s as much about 1926 as 1916 and it’s an argument with Ireland. Our job is to find a way for it still to be an argument with Ireland in 2016 where there are still children living in poverty, there are still problems with alcohol, confusion around what nationalism might mean, where there is still a complicated relationship with a larger neighbour, where economic inequality is still vividly present on the streets outside of this theatre, so there is a lot that O’Casey would still recognise.

“To make a contemporary piece of work you have to find a way to get to what is urgent now in the play. You’re looking for stage images that will stay true in spirit to O’Casey but maybe aren’t in the period but will then unlock moments for audiences. We’re in a world of theatre where we present an image, what’s important is the actors and the audience are in the same room and share the debate in the play and the energy of the play. I think we have made the play urgent and contemporary while still being absolutely of itself.”