These are eventful times for Australian-Irish poet Robyn Rowland. Not only has she published two new collections of verse, but, after more than three decades in which she has spent half of each year in Connemara, she has also received Irish citizenship.

Rowland has just returned from Turkey where she launched her bi-lingual collection, This Intimate War: Gallipoli/Çanakkale 1915 Içli Disli Bir Savas: Gelibolu/Çanakkale 1915, with Turkish translations by Mehmet Ali Çelikel. Prior to to flying out there, Indreabhán-based Doire Press launched Line of Drift, Robyn’s first collection to be published in Ireland.

Line of Drift's poems oscillate between Ireland and Australia and are infused with a sensuous responsiveness to the physical particulars of place, while also evoking people dear to the poet, her family, friends, and lovers. As one reviewer wrote: "[her] truer landscape is the human heart, scarred but resilient". Rowland’s previous volumes include Silence & its Tongues; Fiery Waters, Perverse Serenity, along with Seasons of Doubt & Burning - New & Selected Poems, which spans 40 years of work. Her work has been awarded a number of prizes and she has read all over the world.

Memories of my father

One of the most memorable poems in Line of Drift is ‘Hero Unmasked’, a loving account of her father and how he conquered the claustrophobic panic of radiotherapy by reciting epic Australian folk poems; "Each session at the hospital you’d recite to make yourself breathe -/lips never silent while the machine whirred,/telling the walls the wonderful poems you grew me up on." Did Robyn inherit her own impulse toward poetry from him?

“My father didn’t have a very extended education, he got about half way through school,” Robyn tells me. “His family were working class so it was basically about getting an apprenticeship - though he went on later to study at technical college. Yet literature must have ignited something in him when he was at high school. He can still quote Shakespeare and these old rhythmic poems that were part of Australia’s bush ballad tradition - they always told a story, had wonderful landscape imagery, and they rhymed, so he could remember them more easily. When he was doing the radiotherapy that is the way he survived the panic, by reciting. Those poems are grained into me now and though I don’t write rhyming verse they have a wonderful rhythm and I try and do that in my free verse, to have that rhythmic sense of landscape and story.”

Robyn has been coming to Ireland annually for more than 30 years, so it is natural to enquire if there is Irish ancestry in the Rowland family tree. “I have Irish ancestry on my mother’s side, she is third generation,” she admits. “I came here first in 1983 to a conference in Dublin and I went back to what I thought was the home-place in County Limerick; my ancestors lived there for 20 years but I learned they were actually from Cork. After The Famine their mother, who was 55, got on a ship with the three of her eight children who had survived – they were in early twenties - and they took that terrible trip to Australia. Ever since I have been trying to bring them back home! I’ve realised over the last 30 odd years that this place is home. I’m getting Irish citizenship and a passport and the odd thing about that, is I got the papers for my citizenship here in Connemara, and they designated my ‘foreign birth’ in Australia, so it has been strange this pulling backwards and forwards across the world and in a way I have brought those ancestors back.”

Rowland’s instincitve sensitivity to landscape, palpable in many of the poems, is illustrated by an anecdote she shares: “I once had one of those very strange experiences when was I was driving in the Wicklow hills and I just started crying, I had to pull over to the side of the road. I thought at the time ‘Oh I’m over-working and stressed’ but years later I started to think it some sort of memory because it was the fuchsia hedges that triggered it. Later, when I went to Cork and saw the fuchsia hedges there I wondered was it some kind of genetic memory. Where I live now, it’s like I say in one of the poems, ‘my body and soul laid into the land so each mound of me/fits a silent bog-dip, each curve cups a rufty hillock.’ That’s the way I experience it; a lot of my poems are really laced into this landscape.” 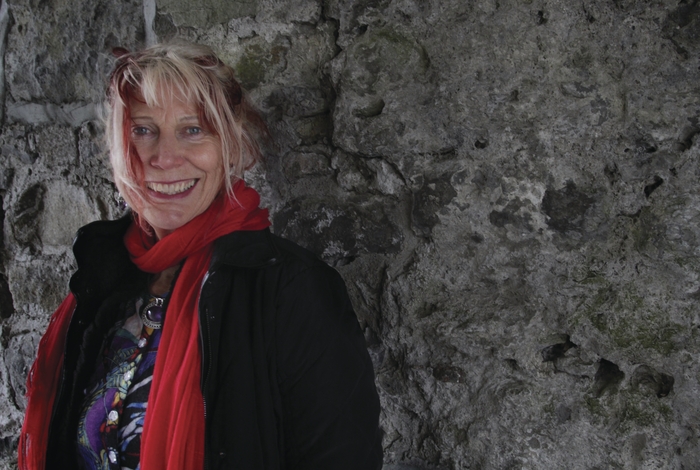 The other side of the battle of Gallipoli or Çanakkale

The western terrain and seaboard of Ireland is far removed from the fateful shore of Gallipoli but it is the latter which draws Rowland’s attention in the powerful and moving volume, This Intimate War, published by 5 Islands Press. She tells me how it came about.

“My sister-in-law who lives in Sydney is Turkish," she says. "I first went to Turkey in 2009 and fell in love with the place and its history. Then I started doing readings in countries that were once part of the Ottoman Empire and began to see this much larger picture. I went to Cannakale, which is on the Dardanelles, opposite Gallipoli, and in the naval museum there I discovered there was a whole other story about the battle I had never heard about. When I was growing up you’d have thought the Australians had won at Gallipoli.

"As I did more research the book started to emerge and push its way forward. I’m very pleased with it. I had to really fight to get a publisher who would do it in the bi-lingual format but I was very committed to the idea that both Turks and English-speaking people could access the same material in the same place. I was at a VIP breakfast in Gallipoli on Anzac day; Prince Harry and Prince Charles were there but the biggest thrill for me was meeting Michael D Higgins, we had a lovely conversation and he came to my reading.”

While Gallipoli is synonymous with the ANZACs, Irish troops also fought and died there and Rowland evokes their experience in ‘Green Road’; "We sailed over the ones that never made it to land,/never fired a gun, or saw the carnage/drowning out of the River Clyde./They were from my home-place and I left them there/in those razor ravines, too far from Irish earth."

“It’s a strong poem I think,” she muses. “Those men came out of the River Clyde, which was like a Trojan horse of a ship, and they were just mown down. The British leadership was appalling. A lot of those men became invisible in history because of the War of Independence and when they came back, as one of them said, ‘a hero if I fall, no-one if I come home’. There were two lads from around here in Connemara who were good friends, aged 21, they went to Gallipoli in July and by August they were both dead.”

Robyn concludes our chat by telling me how she hooked up with John Walsh and Lisa Frank’s Doire Press. “I first read for John at the North Beach Poetry Nights, years ago. I watched Doire Press grow and felt it would be lovely if they took one of my books. I’m really thrilled it has happened and it has been funded by the Irish Arts Council and I’m proud of that, it consolidated my sense of dual citizenship. Also, the cover painting is by a friend of mine from Boyle, Vera Gaffney, and it’s absolutely beautiful!”

Line of Drift is available from all good bookshops and through www.doirepress.com for €12.